This year marks the 209th anniversary of Oktoberfest; the world-famous beer festival which celebrates Bavarian culture on the famous Theresienwiese grounds in Munich. In addition to a selection of beers brewed according to the strict German Reinheitsgebot purity law of 1516, the festival will also house a wide range of beer related inventions. According to the European Patent Office, located just a few kilometres away from the festival, every beer tent will contain technology that is protected by more than 2000 patents.

The inventions on display in the tents of Oktoberfest have come a long way since the days of ancient Mesopotamia, when open fires were used to brew beer from the remnants of porridge grain and naturally occurring wild yeast. It wasn't until the invention of the thermometer, by Daniel Fahrenheit in 1714, that brewers were able to monitor temperature throughout the brewing process in order to accurately regulate beer production and thereby control the flavour of the resulting beer. Brewing was further improved by the invention of the saccharometer (a type of hydrometer) at the end of the 18th century, by Thomas Thomson. The saccharometer allowed brewers to consistently produce beer with a specific alcoholic content by determining the amount of sugar present in the beer as it was brewed.

One of the first notable patents to be granted for brewing technology was issued to Louis Pasteur in 1873. 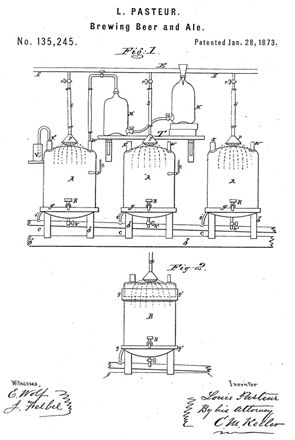 Pasteur's system cooled fermenting broth in vessels to protect the beer from unwanted airborne contamination. The vessels were cooled by spraying cold water onto their outer surfaces, after which a brewing yeast was added to the broth. This broth then developed into a beer with improved quality and taste compared to previous techniques. Protection for Pasteur's system has long since expired, but the technique is still used by many breweries to this day. 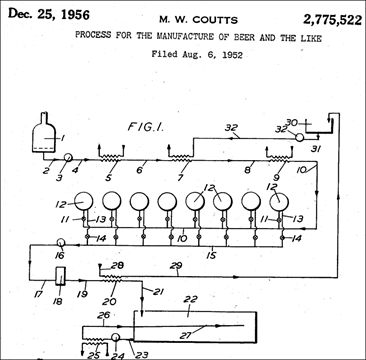 The continuous process allowed beer to be fermented under pressure inside brewing tanks without ever coming into contact with the external atmosphere, even when the beer was bottled. By eliminating variables that would otherwise be introduced by the atmosphere outside the tanks, this technique consistently produced beer with a longer shelf life compared to batch brewing.

The recent rise in popularity of craft beer has brought about a raft of inventions aimed at improving small scale brewing, such as home brewing. Home brewing has long been a hobby of beer enthusiasts, but has traditionally been restricted to those with enough space to store the array of equipment required for producing reasonable quality beer. Thanks to the inventors of the Automated Home Beer Brewing Machine and Method, beer connoisseurs are now able to brew beer with the push of a button using a self-contained unit that can sit on a kitchen table. 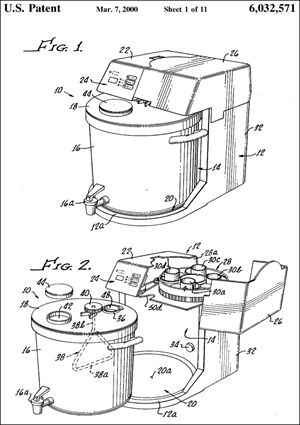 According to the US patent filed by the machine's inventor, a single vessel is provided into which the user simply loads the desired ingredients before the machine itself automatically carries out the steps of the brewing process.

Returning to beer related matters at the EPO, a referral currently pending before the EPO's Enlarged Board of Appeal may influence the way in which brewers use patents to protect their inventions in the future. Referral G3/19 aims to provide some clarity on whether plant products exclusively obtained by means of essentially biological processes are patentable. This is relevant to brewers because many plants and plant-derived products (such as seeds) used in the brewing industry are obtained exclusively by "essentially biological processes". Frustratingly for Applicants in the field, the EPO has currently stayed all proceedings in which the decision depends on the outcome of G3/19.