Azimut is an asset management company that currently trades on the Italian stock market and is part of the blue-chip index of the Italian market (FTSE MIB). The company offers investment management services and manages open-end mutual and pension funds, as well as offers investment advice and insurance. Azimut distributes its products through financial consultants in northern and central Italy. Azimut's Remuneration practices have not impressed their shareholders for some years now. This article reviews why.

The company's corporate governance and remuneration practice has long been criticized by proxy advisors, investors and other stakeholders. At their 2019 and 2018 Annual General Meetings (AGMs), 31.5% and 22.6% of shareholders voted against the remuneration policy (corresponding to 41% and 46% of minority shareholders).

Interestingly, the company did not acknowledge or propose any changes to the remuneration policy for 2020.

Under the current plan, the company does not have any long-term incentive plan, meaning that their remuneration policy is very short-term focused. Executives can earn up to 200% of their base salary under the current plan. However, this may be acceptable as it is controlled by a shareholder agreement.

Per the Corporate Governance code of Italy, given that the remuneration policy failed to secure the requisite approval, Azimut must apply the previous year's policy. It is worth noting that the old policy is the same as the new one that was proposed, as there were not any changes.

Understanding the shareholding structure of the company

Data from CGLytics suggests that the Azimut's board effectiveness score is 52%, which also lags its sector's average score. Contributing to the score are gaps in their diversity. The company currently has only 25% of its members being independent which contradicts the recommendation of Italy's Corporate Governance Code. The Italian Code recommends that Independent Directors should form at least half of the board for large companies (blue chip companies). The board of Azimut also currently has no foreigner on it which is quite interesting given their global presence.

Azimut's board composition and effectiveness 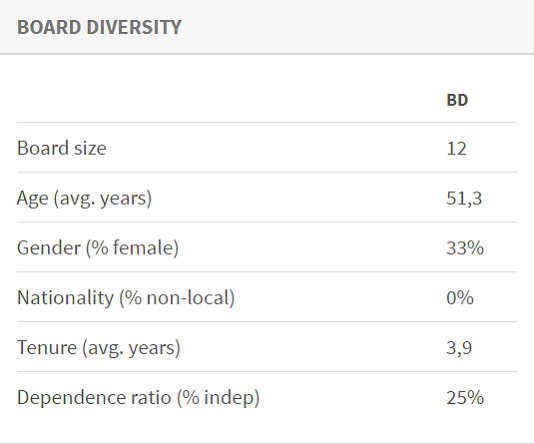 Pay for performance alignment of Azimut

Using CGLytics pay for performance tool, we were able to construct a bespoke peer group for Azimut to identify trends using year end performance indicators, ROE, ROA, ROIC and EPS to benchmark CEO compensation. The data suggests that Azimut's CEO Total Realized Compensation (TRC) was consistently higher than the median of its peer group. The highest we see is in financial year 2017 where the CEO's realized compensation was over EUR 5M while their median TRC of their peers was only just under EUR 1.5M. However, from 2017 to 2019, Azimut's CEO TRC fell to EUR 3.5M while the median CEO TRC of their peers also increased to EUR 1.7M. It is worth mentioning that included in the 2017 CEO TRC is the severance pay of EUR 2.25M that was paid to outgoing CEO Marco Malcontenti. The company also outperformed their peers on most of their performance indicators across the years.

CGLytics has done a relative positioning of the CEO pay against 3-year TSR using the pay for performance tool. The analysis suggest that that Azimut displays a misalignment among their country and sector peers. The CEO's TRC ranks top decile at the 93rd percentile while the 3-year TSR ranks below median at the 36th percentile. 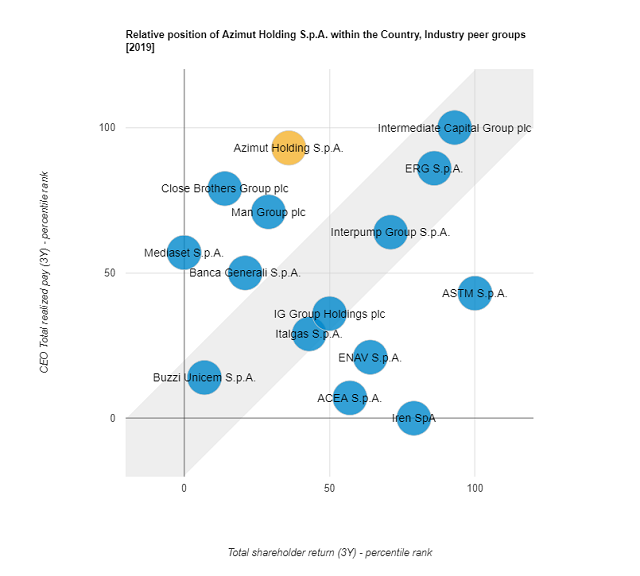 Although Azimut is yet to make any changes to their pay structure despite minority shareholders grievances, it must be noted that consistent revolts result in issuers being an activist investor target. The lack of long-term remuneration planning in their remuneration policy send signals that the board is short-term focused. This does not promote shareholder long-term growth. Utilizing CGLytics pay for performance tools, the company could gain insights into how their peers are constructing their remuneration policies to align with performance and increase shareholders value.