The Wage Order Section 11010 by the Division of Labor Standards Enforcement ("DLSE") imposes a policy pertaining to daily overtime compensation of non-exempt workers in the manufacturing industry. Overtime is simply defined as work "beyond eight (8) hours in any workday or more than six (6) days in any workweek." The overtime rate of either one and one-half (1 ½) times the employee's regular rate of pay or double the employee's regular rate of pay shall apply depending on the total number of hours. While Section 11010 seems simple enough that any employer might avoid a wage violation so long as it followed the rule, a recent California case has redefined the calculation of overtime when the dispute arose with respect to how a flat rate bonus should be incorporated to calculate the employee's overtime hourly rate.

In Alvarado v. Dart Container Corp. of California (decided March 5, 2018), the California Supreme Court ruled that total nonovertime hours actually worked during the pay period would be the factor in calculating the overtime compensation involving a flat sum bonus. The Plaintiff Hector Alvarado ("Alvarado") was a warehouse employee of Dart Container Corporation of California ("Dart"), a manufacturer of food service products. It was customary for Dart to pay a flat sum of $15 a day of a weekend work to any employee who worked on a weekend. The bonus functioned as an incentive for the employees to work the unpopular weekend shifts.

Here, the main focus was on resolving the differences between the parties in the way such flat sum bonus was incorporated into Alvarado's "regular rate" of hourly pay. In order to calculate the overtime pay for a particular workweek in which Alvarado received the bonus and worked overtime, the regular hourly rate for the relevant workweek needed to be determined.

The first example below, which reflects Dart's formula, incorporated all of the hours the employee worked in a workweek, including the overtime hours; then computed a new hourly rate for the overtime. Please note that the following examples do not reflect the actual figures in Alvarado.

Total Pay for Nonovertime in a Workweek = $600 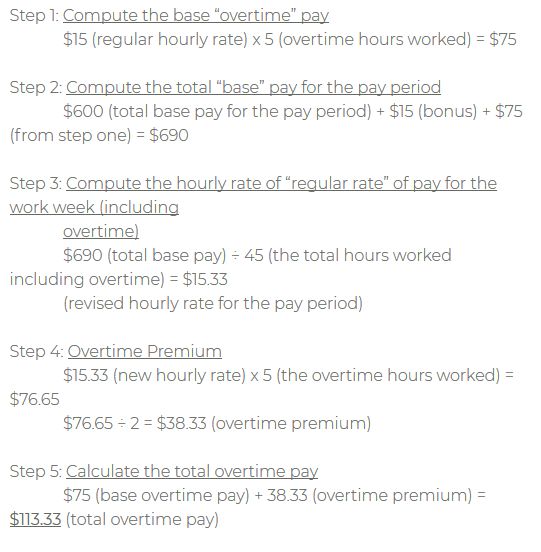 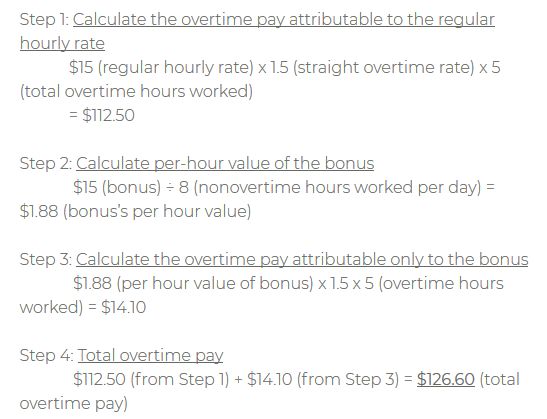 As shown by the two examples above, Alvarado's formula would yield a marginally higher overtime figure. Further, Dart's formula would decrease the hourly rate as the amount of overtime increases. In essence, the difference between the two formulae is whether the divisor for calculating the bonus' hourly rate is determined based on: 1) all hours worked including overtime during the relevant pay period; or 2) only the nonovertime hours worked during the relevant pay period.

The court reasoned that if a flat-sum bonus affects the overtime rate, it "must be expressed as a per-hour value." In Alvarado, the "weekend bonus" was paid to the employee whether or not the employee worked overtime that day. Therefore, it should be treated as if it were "earned as part of the nonovertime hours," and the overtime rate should be calculated by considering each nonovertime per-hour value separately.

Action Steps: While many workers welcome the idea of a bonus, the employers in California need to remember that the courts in California tend to follow the policy mandate of the Labor Code which is to discourage employers from imposing overtime in favor of worker protection. Although a solution to this issue is yet to be found, the employers may need to re-evaluate their existing bonus policies in order to avoid a dispute similar to that in Alvarado.