by Kyle Debono (Zejtun)
Finance Malta
Your LinkedIn Connections
with the authors
To print this article, all you need is to be registered or login on Mondaq.com.

Cost averaging or as it is better known Dollar Cost Averaging is a technique that can be used in order to ease into an investment and not commit a large amount of money at one go. Not every investor can afford a lump sum investment and at times an investor may be reluctant to invest a substantial amount of money when one is expecting a correction in the markets. This is where the benefit of cost averaging comes in. Given the current market conditions whereby equities appear to be correcting from a 9-year positive run since the 2007-09 financial crisis and interest rates have started to rise in the US and eventually expected to rise in the EU and UK, this technique could be a very useful tool at present for many investors.

The idea is simple – an investor decides to invest a fixed amount of money on a regular basis, for example monthly or quarterly. The fixed amount may be a fixed Euro amount or a fixed percentage of one's salary. The same amount is invested repeatedly over the same time intervals indefinitely or until a particular financial goal is reached.

The preliminary steps are the same as when approaching any investment, one has to set their investment objectives, establish their risk tolerance, agree on a time horizon, calculate an amount one can afford to commit to comfortably and invest into instruments one is familiar with. Hence, one does not simply start buying the first investment that comes to mind on a regular basis indefinitely, but a proper investment plan should first be decided. This is where the help of an experienced investment advisor becomes vital. If one does not have the time and/or expertise to do the initial as well as the on-going research themselves they should always seek the advice of a professional. Remember that small amounts invested on a regular basis will add up and may amount to a significant figure after just a few years. For example, investing €1,000 monthly amounts to €60,000 invested in just 5 years' time.

The Importance of Re-Balancing

Just because the original plan is to invest 'x' amount of money every 'y' months indefinitely it does not mean that there are no changes taking place. One important aspect to keep in mind is to rebalance the portfolio as time goes by. Hence, if the initial plan was to have 33% of the money invested into each of 3 asset classes, as time goes by (although the same amount of money would have been invested into each class) the actual market value of each class making up the portfolio could be quite different. For example, if the initial plan was to have 33% invested into US equities, with the balance invested into EUR bonds and EUR shares, and the US equities experience much better growth in price, then the investors' portfolio would end up having more invested into US equities than originally planned. This could eventually add too much foreign exchange risk for example if the US Dollar had to fall in value versus the EUR. Hence, it is important that from time to time the portfolio is rebalanced. Furthermore, as time goes by one's investment objectives, risk preferences and time horizon may easily change. Therefore, the portfolio may need to be re-balanced and the initial plan would have to be re-visited from time to time.

The Importance of Cost Analysis

Another important piece of the puzzle required in order to setup and maintain a successful investment plan is to consider costs. Although the cost of buying an equity or an ETF can be low, for example 1%, there is normally a minimum charge to consider. Assuming that the minimum charge of buying an equity or ETF is €25, then unless one invests at least €2,500 in each instalment they would in fact be paying more than 1% per investment payment. Hence, it is vital to decide on a figure one can afford on a regular basis that is also cost effective. For example, if one can afford to set aside €1,000 per month it would be more cost effective to invest €3,000 every quarter than €1,000 per month. Keeping in mind that investments also carry on-going charges such as a management fee to the investment company maintaining one's plan and/or custody fees for the brokerage firm to hold the investment on its accounts, plus the on-going expenses of funds and ETFs, it becomes even more important to consider the cost aspect in order to determine one's ideal regular investment amount.

Other Advantages of Cost Averaging

Another advantage of using a cost averaging approach to investing is to instil a sense of saving. By having to commit to the regular instalments, as one would do when paying back a loan for example, one would become more disciplined in setting aside some money for a rainy day or to achieve a particular financial goal. As the investment instalment becomes part of one's routine, a commitment, it becomes much easier to budget and save money. From research carried out, it is much easier to save money by setting a target of the amount of money one would like to save than to try to save money by trying to limit one's expenses.  The amount of money committed to saving will automatically not be considered when it comes to deciding on the amount of expenses one can incur that month or that year.

Option a is shown in the schedule below: 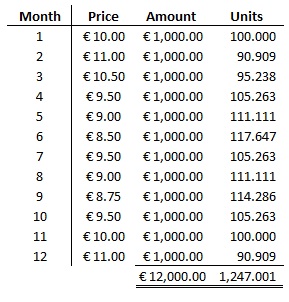 An important point to consider from the above exercise is that cost averaging will be more advantageous if the price of the instrument being invested into falls and the investor manages to purchase more of it at a lower price. If, however the price had to keep increasing, then investing a lump sum would have been more worthwhile. This is why cost averaging is considered to be quite an attractive method of investing given the current market situation.

If we look at equities we see that since the financial crisis that ended in 2009 the S&P 500 (which represents a portfolio of the largest US equities) has been on a steady upward trend. Between March 2009 and January 2018 the index has risen 324.65%, however since that peak until close of business on 12 April 2018 the index fell 7.27%. The reasons have been mainly centred on fears about trade wars between the US and other nations and the increasing interest rates. Hence, if we had to be cost averaging by buying a fixed amount every month in the S&P 500 (example through an ETF) since the beginning of this year we would be better off than if we had bought a lump sum in January.

On the bonds side, the US has already started increasing interest rates and it is expected that they will continue doing so over the coming months/years. Within the UK and EU things are bit slower, especially given the Brexit issue for the UK and the differences between the economic situation in Germany and the peripheral EU countries like Greece, Portugal and Italy. However, it is expected that interest rates will start to rise both in the UK and EU as time goes by and as inflation eventually starts creeping in. The relevance of interest rate expectations on the bond market is due to the fact that if interest rates go up bond price go down. Hence, in a situation that we expect interest rates to go up we also expect bond prices to go down. The big question that is difficult to answer is when this will occur. An option an investor has is to use cost averaging when buying into the fixed income market, so that if prices of the bond or bond fund had to fall the investor would buy at lower prices.

If used correctly cost averaging can be a very profitable tool for any investor. It is a method that lowers concentration risk by easing into an investment as opposed to committing a large sum at the outset. Its success will depend on how well the plan is constructed and adhered to and how well the investor considers the key aspects of cost analysis, regular re-balancing and others points covered in this post. As usual nothing in this post should be considered as investment advice and examples used were given for illustrative purposes and not intended as a recommendation to trade them.

ARTICLE TAGS
Malta Strategy Investment Strategy
POPULAR ARTICLES ON: Strategy from Malta
6 Ways To Stand Out From Other Job Candidates
VacancyCentre
​When it comes to finding a new job, it can be tough to stand out from other candidates. With so many people competing for the same positions, it's important to find ways to differentiate...
Economics Weekly Alert 02/2023
KPMG in Cyprus
By type of project, an increase of 12,4% was observed for buildings and of 6,0% for civil engineering projects in the third quarter of 2022 compared to the corresponding quarter of 2021.
Economic And Commercial Category Malta Economic Outlook
KPMG Malta
KPMG's Infrastructure, Public Policy and Strategy team just launched the first edition of the KPMG Malta Economic Outlook in January 2023.
Malta Space Strategy - Our Perspective
KPMG Malta
Stephan Piazza speaks about the benefits of Space to the Maltese Economy.
The Lessons Of History - Learning From Questioning Conventional Wisdom And Why We Must Faithfully Keep The Past Alive
Hassans
Our history is sometimes not what we think it is, nor as simple as it is portrayed. Let me provide one important example and some commentary around it.
Blocker Subsidiaries Are Back: Why This Simple Structure Is Used During Economic Downturn
Intertrust
While there are many unusual challenges straining the global market under the weight of COVID-19, it seems some things never change in moments of economic downturn.
FREE News Alerts
Sign Up for our free News Alerts - All the latest articles on your chosen topics condensed into a free bi-weekly email.
Register For News Alerts
Article Tags
Malta Strategy Investment Strategy
Related Articles
Economic And Commercial Category Malta Economic Outlook KPMG Malta
6 Ways To Stand Out From Other Job Candidates VacancyCentre
June's Unemployment Rate Was Lowest Ever Recorded VacancyCentre
EU Commission Approves 2022-2027 Regional Aid Map For Malta KPMG Malta
Malta Space Strategy - Our Perspective KPMG Malta
Mondaq Webinars
Considering the Nigerian Start-Up Act & The Opportunities for Tech
Oake Legal
A Guide for Business and Investors – The Sleeping Giant; Why is Nigeria the New Emerging Market for Global Business
Threshing Fields Law Practice
More Webinars
Comparative Guides
Artificial Intelligence
Aviation Finance
Aviation Regulation
Banking Regulation
Blockchain
More Guides
Mondaq Advice Centres
Global
Trademarks in SAARC Countries
More MACs
Upcoming Events
Mondaq Social Media