The application underlying this decision relates to the area of electronic communication, such as emails and the like. However, the European Patent Office refused to grant a patent that specifically deals with detecting street addresses in a message text. Here are the practical takeaways of the decision T 0504/18 (Linking an address/BLACKBERRY) of June 18, 2021 of Technical Board of Appeal 3.5.07:

Improved efficiency of a computer-implemented method due to algorithmic features of the program can normally only be considered a "further" technical effect if it is based on "further technical considerations".

According to the Board in charge, the claimed invention relates to linking an address in a message such as an email. The Board summarized the invention as follows:

According to the technical background disclosed in the application, users of communication devices or computers may send messages such as emails that include phone numbers, email addresses or web addresses. Applications on some devices create hyperlinks for phone numbers, email addresses and web addresses, so that the user can click on the link within the message and the device will respond by respectively either placing a call, opening an email to be sent or opening the browser to the linked web page (paragraph [0005]).

The application proposes detecting a physical address such as a street address within a text message, creating a link for this physical address so that selecting the link will result, for example, in the address location being displayed on a map (description, paragraphs [0029] and [0030]). 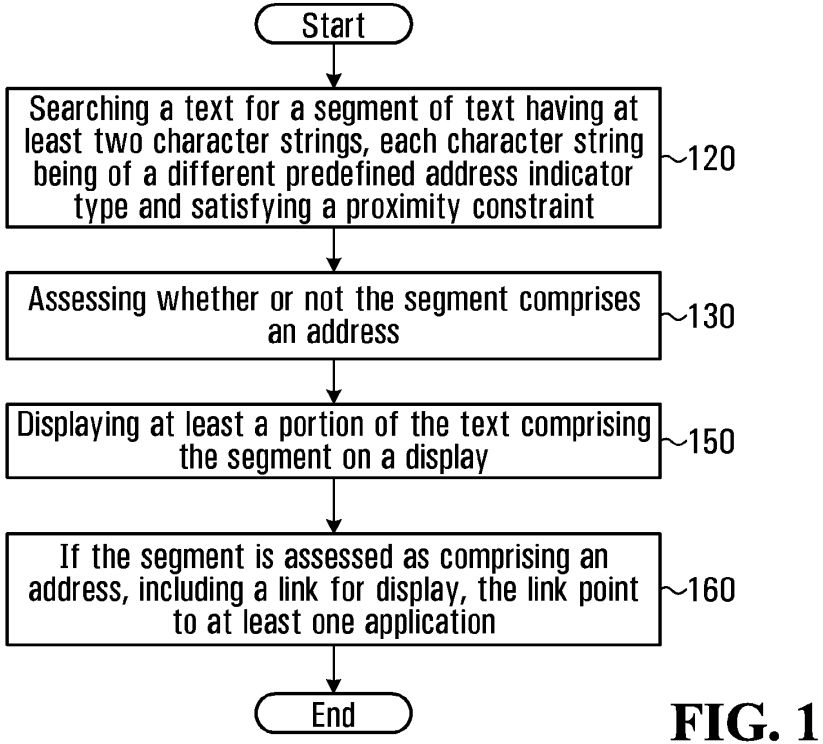 Claim 1 (main request - numbering added by the Board)

[C] finding a number in the text,

[D] when the number is found, searching forward in the text within a predetermined number of words of the number,

[F] selecting a segment of the text including the number and said at least two character strings;

[G] assessing whether or not the segment comprises an address (130);

[H] displaying the segment on the display of the mobile device (150); and

[I] if the segment is assessed as comprising an address, including a link for display, the link pointing to at least one application (140),

[J] wherein assessing whether or not the segment comprises an address comprises:

[L] if the probability is above a threshold probability, assessing the address as valid;

[M] further comprising configuring the link to start an application to present a menu of options related to the address on the display, when selected.

To convince the Board, the Appellant argued that including links in the text of a message would make the message interactive, rendering it technical:

Furthermore, according to the Appellant, the structure of the claimed algorithm to generate the links would be efficient due its specific 2-step structure and thus would involve further technical considerations. To substantiate its position, the Appellant pointed to a decision of 1992:

Furthermore, referring to decision T 769/92, the appellant argued that "technical considerations" did not need to relate to computer hardware, but more generally to the processing of data. In particular, the claimed address detection algorithm involved "further technical considerations", as it had been structured in a two-step approach to make it efficient. In a first step, the algorithm identified a segment of the text comprising a number and at least two character strings using fast, simple pattern matching (see steps B to F of claim 1). Only in a second step did the algorithm involve more complex processing, such as accessing a database in order to validate the segment as an address (see steps G and J to L of claim 1).

However, the Board did not follow the arguments of the Appellant. First of all, the Board expressed that the findings of T 769/92 would be obsolete in view of G 3/08. Furthermore, the alleged improved efficiency could only provide a further technical effect if it is based on further technical considerations, which would not be the case here:

In respect of the improved efficiency of the claimed algorithm as a technical effect, the board holds the view that improved efficiency of a computer-implemented method due to algorithmic features of the program can normally only be considered a "further" technical effect if it is based on "further technical considerations" (see decisions T 1924/17, Reasons 21; T 697/17, Reasons 5.2.3), but that is not the case here.

Therefore, according to the Board, features B to J and feature G of claim 1 of the main request, relating to the algorithm for generating links of the addresses in the text of the message, have to be considered non-technical and thus have to be ignored for the assessment of inventive step:

3.8 In respect of the appellant's argument that the algorithm for detecting an address contributed to the overall technical purpose of providing an interactive text document, the board sees no such contribution in the present case, since the relationship between automated address detection and configuration of the link is a mere aggregation of activities. Enabling interactivity by using links was already known from document D1 (and well known in general, as admitted by the appellant). It is clear that the selectable links work independently of the automatic detection of any street addresses; they might just be added manually to such an address, for example. Moreover, D1 discloses that the links can also be used for other kinds of data such as web addresses or phone numbers. Hence, the board is not convinced that the alleged technical purpose of generating interactive text documents by means of links could somehow lend technical character to the algorithm for automated address detection.

3.9 According to the established case law of the boards of appeal, when assessing inventive step in accordance with the problem-and-solution approach, an aim to be achieved in a non-technical field may legitimately appear in the formulation of the problem as part of the framework of the technical problem to be solved, as a constraint that has to be met (see decisions T 641/00, OJ EPO 2003, 352; T 154/04, OJ EPO 2008, 46).

Consequently, when starting from document D1, the objective technical problem to be solved is how to automatically provide selectable links in the text messages of D1 for the known street address, given the algorithm for detecting street addresses in a text according to features B to G and J to L of claim 1.

Since all other features are known from D1, as a result, the appeal was dismissed due to lack of inventive step within the meaning of Article 56 EPC.