by Fragomen
Fragomen
To print this article, all you need is to be registered or login on Mondaq.com.

Employers posting employees in the Netherlands will be subject to a notification requirement, most likely later this year when an online notification system becomes active, according to rules from a law enacted in 2016. That law has subsequently been revised and the new version is in the process of being implemented in the Netherlands. The new draft law will bring additional protections for posted workers.

The progression of the law discussed in this alert is depicted below: 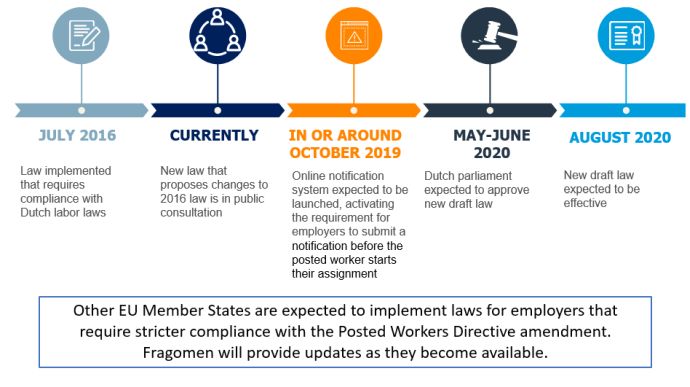 ARTICLE TAGS
Netherlands Employment and HR Employee Benefits & Compensation Immigration General Immigration
POPULAR ARTICLES ON: Immigration from Netherlands
The New HGV Driver Visa Scheme In Context
Richmond Chambers Immigration Barristers
With the UK government's recent announcement of a new post-Brexit visa scheme for HGV lorry drivers and poultry workers, the UK's current regime for temporary work visas has been brought under the spotlight.
A Quick 5-point Assessment Of The New UK/India ‘Migration And Mobility Partnership'​ And The ‘Young Professionals Scheme'
Latitude Law
Announced on 04 May 2021, the Government is calling the Migration and Mobility Partnership a "professional and cultural exchange programme".
"Humblebrag" (n) (inf) – An Ostensibly Modest Or Self-deprecating Statement Whose Actual Purpose Is To Draw Attention To Something Of Which One Is Proud
Squire Patton Boggs LLP
Unless as part of a band, I always think that blowing your own trumpet is rather poor form, but any such scruples which many lawyers usually have around such things are dumped in a heartbeat
Visit Visas For Short-term Work
Shepherd and Wedderburn LLP
British businesses have long relied on temporary labour from the European Union to service short or medium-term projects. From an immigration perspective, prior to Brexit this relationship used to be frictionless.
Immigration And Global Mobility Update / October 2021
lus Laboris
Every 2 months, our experts from around the world put together an Update on immigration & global mobility, setting out recent changes to the law. This month, we include updates from 22 countries.
A Guide To Investing In Malta
CSB Group
Malta, a small country with immense potential. Situated in the heart of the Mediterranean, it's strategically placed to support investments in multiple sectors and verticals.
FREE News Alerts
Sign Up for our free News Alerts - All the latest articles on your chosen topics condensed into a free bi-weekly email.
Register For News Alerts
Article Tags
Netherlands Employment and HR Employee Benefits & Compensation Immigration General Immigration
Related Articles
Quarantine Requirements Removed For Fully Vaccinated Travelers Envoy Global, Inc.
New Residence Permit Available For Start Up Companies Seeking Global Talent Envoy Global, Inc.
Deadline To Submit Residence Applications For UK Nationals Living In The Netherlands Extended Envoy Global, Inc.
Once Dutch, Always Dutch: A Successful ‘Tjebbes-Case' Everaert Advocaten
Netherlands Grants More Business Activity Rights To UK Business Visitors Envoy Global, Inc.
Mondaq Webinars
Investigations as a Key to Good Governance in the Middle East
Alvarez & Marsal Europe LLP
Webinar London UK
How to do Fintech: Potential Impacts of the Newly Introduced Regulatory Sandbox on Existing Players and Newcomers
Carotenuto Studio Legale
Webinar Rome Italy
More Webinars
Comparative Guides
FinTech
International Arbitration
Labour and Employment
More Guides
Mondaq Advice Centres
Global
Trademarks in SAARC Countries
More MACs