Should the new CEO/General Manager of a French entity be hired through an employment contract?

This question is often asked by foreign clients or law firms with which we work on in an M&A transaction where the new foreign owner wants to "promote" an existing senior executive to the role of CEO/Président or general manager/Directeur Général and can't understand why their choice is reluctant to swap her/his status as an "employee" to become a "corporate officer".

Under French law there is a clear distinction between an employee (blue-collar, white-collar, senior executive, etc.), whose legal relationship with the company is determined by an employment agreement and applicable labor laws, and a corporate officer, whose relationship with the company in which she/he holds a corporate office is determined by commercial code.

French corporate law requires that a company must be represented by at least one individual or non-physical legal person, who will manage the company and be its legal representative. Depending on the form of the company, the main legal representative is the CEO/Président or President-General Manager or Manager/Gérant, expressly identified on the Extrait K-bis, the French official identification document for companies, and upon appointment is automatically a corporate officer. No employment agreement is required.

In the case of a larger company (typically an SA), if the representative is a non-physical legal person, (such as the holding entity of the group to which the French company belongs) – or an individual, such as a person who does not necessarily have the ability or capacity to manage or run all of the operations of the company, the representative often needs to rely on one or more physical persons to handle operational matters. Usually these persons are General Manager/Directeur Général/Directeur Général Adjoint who are either appointed as "corporate officers" or hired as "employees".

What are the legal differences between a "corporate officer" and an "employee" under French law? 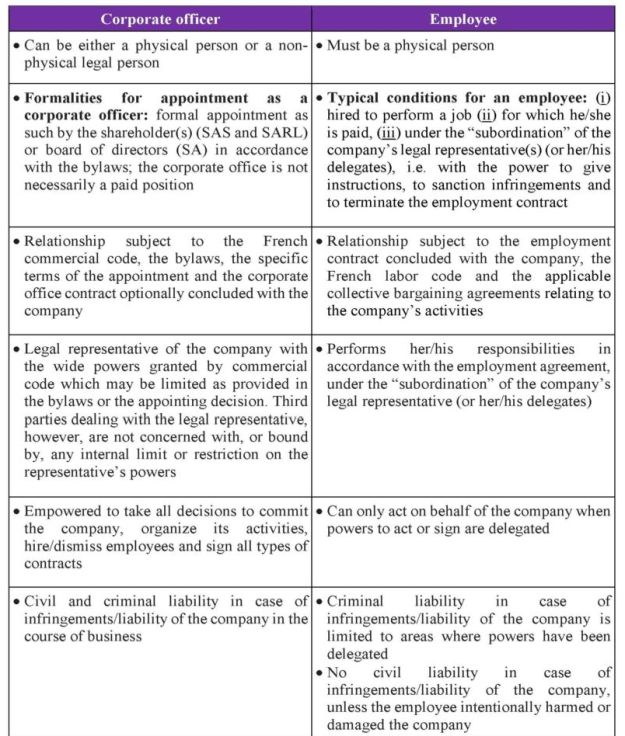 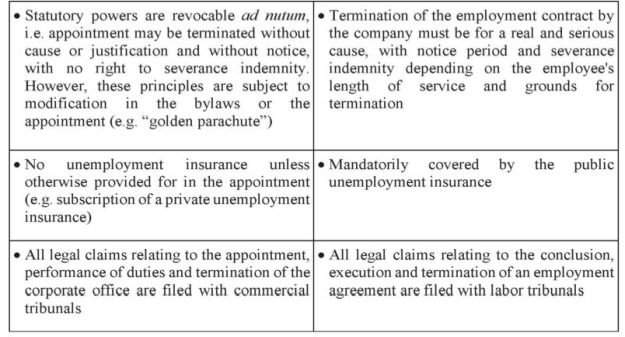 Is it possible to hire a corporate officer under the terms of an employment agreement?

This being said, sometimes, a corporate officer can simultaneously hold a corporate office and be bound by an employment agreement with the same company. This double status is however limited to situations where the three following conditions are met: the person must (i) perform technical duties as employee that are different from the ones that must be performed as corporate officer (e.g. the corporate officer may perform a particular engineering function in the company) (ii) be compensated by a salary in respect of his/her employee's duties and (iii) perform the employee's duties (e.g. in the group's engineering business) in which he will be "subordinate" within the company (e.g. to the President of the company and/or to the Head of the Engineering Division of the parent company).

As the two relationships are legally distinct, the same circumstance may have different outcomes, e.g. a management mistake made by the "double-hatted" person in carrying out her/his responsibilities as a corporate officer which results in the legitimate termination of her/his position as a corporate officer does not, in principle, also justify the termination of her/his employment contract.

Before entering into a "double-hat" arrangement, it is highly recommended to ask the French public unemployment insurance agency (Pôle emploi) to assess if the required conditions are met (notably the subordination link), via the specific "rescrit" procedure. Under this procedure, the employer and the employee/corporate officer complete a detailed questionnaire (available on Pôle emploi's website) and provide documents to enable Pôle emploi to assess whether the "double-hat" situation is possible or not.

We are frequently asked to assist our clients with this procedure and draft a covering letter explaining the situation more fully than is allowed by the questionnaire available online, to improve the likelihood of success of the application.

What can be done to encourage an employee to accept the position of corporate officer when the "double-hat" situation is not possible?

The reluctance of a senior employee of a company to become the President and/or General Manager of a French company is understandable when considering the personal cost of possibly losing the considerable benefits of employment agreement (e.g. potential loss of rights to unemployment insurance, no accrual of seniority as corporate officer for the calculation of the rights of the employee on termination, no guarantee of being paid in case of bankruptcy of the company, etc.).

To address this situation, the appointment of the President and/or General Manager will often include terms that are designed to reduce as much as possible the disadvantages of holding a corporate office by providing similar "employment-style" benefits to the corporate officer, such as private unemployment insurance, a "golden parachute" in case of termination without cause, the accrual of seniority as corporate officer and/or a compensation package with the same features as that available to senior executive employees of the company, etc.

ARTICLE TAGS
France Corporate/Commercial Law Corporate and Company Law Directors and Officers M&A/Private Equity Employment and HR Contract of Employment Employee Benefits & Compensation
POPULAR ARTICLES ON: Corporate/Commercial Law from France
The Modern Slavery (Amendments) Bill June 2021
Albert Goodman
The Modern Slavery (Amendments) Bill June 2021 sets out changes to the MODERN SLAVERY ACT 2015 which first came in to force in October 2015.
Definitions Of "Benefit" - Jersey's Royal Court Offers Useful Guidance On Trusts And Non-Financial Benefits
Walkers
In the matter of the May Trust [2021] JRC 137 concerned an application by the Jersey Trustee of the May Trust ("the Trust") to the Royal Court of Jersey, seeking its approval and/or sanction of the Trustee's
LLP: Employee Or Member?
Berg Kaprow Lewis
Although we are all familiar with the adjective ‘self-employed', it is a logically nonsensical term: you cannot as a matter of law enter into a contract of service with yourself so as to become your own employee.
ESG In Focus: Risk Management – Part 1 Of 4
AlixPartners
What are a company's responsibilities to society as a whole?
Registration Of Overseas Entities
Withers LLP
The publication of the ‘Pandora Papers' has led to an increased focus on the transparency of the ownership of land in the UK and calls for the ‘Registration of Overseas Entities Bill'...
Notaries: Are Simple Certifications A Thing Anymore?
Appleby
Notaries are primarily concerned with the authentication and certification of signatures, authority and capacity relating to documents for use overseas. For centuries, notarial acts have been recognised and accepted at home and abroad.
FREE News Alerts
Sign Up for our free News Alerts - All the latest articles on your chosen topics condensed into a free bi-weekly email.
Register For News Alerts
Article Tags
France Corporate/Commercial Law Corporate and Company Law Directors and Officers M&A/Private Equity
Employment and HR Contract of Employment Employee Benefits & Compensation
More Tags
Related Articles
« Rent A Car » Peut Enfin Désigner Des Services De Location De Voitures Haas Avocats
Les « petites » acquisitions des GAFAM examinées par la FTC Haas Avocats
Management Packages : Des Mesures De Sécurisation En Discussion Dans Le PLF 2022 Mayer Brown
European Commission Targets €500 Billion + In "Foreign Subsidies" Worldwide: How Global Businesses Can Address New Compliance Risks And Burdens Paul Hastings
Exceptional Purchasing Power Bonus : An Interesting Device For Companies Soulier Avocats
Mondaq Webinars
Complex/Cross-Border Construction Claims: Arbitrators, Mediators (former GCs) Explore Dispute Resolution to Keep Projects Moving
JAMS
Webinar Chicago United States
Investigations as a Key to Good Governance in the Middle East
Alvarez & Marsal Europe LLP
Webinar London UK
More Webinars
Comparative Guides
Anti-Corruption & Bribery
Artificial Intelligence
Aviation Regulation
Corporate Tax
Cybersecurity
More Guides
Mondaq Advice Centres
Global
Trademarks in SAARC Countries
More MACs