by Arpita Karmakar (Gurgaon)
S&A Law Offices
Your LinkedIn Connections
with the authors
To print this article, all you need is to be registered or login on Mondaq.com.

The Union Government has further liberalized the Foreign Direct Investment (FDI) regime on June 20, 2016, by bringing most of the sectors under approval route except a small negative list and augmenting the FDI inflows in the country.

The Government has felt that the country has potential to attract far more foreign investment which can be achieved by further liberalizing and simplifying the FDI regime. This would further augment the employment and job creation in India.

Accordingly, the Government has now introduced a number of amendments in the FDI Policy by making India the most open economy in the world. The amendments introduced in the policy include increase in sectoral caps, bringing more activities under automatic route and easing of compliances for foreign investment. These changes have been discussed in brief in the following paragraphs:

It has now been decided to permit 100% FDI under government approval route for trading, including through e-commerce, in respect of food products manufactured or produced in India.

The government had in its Union Budget-2016 this year announced that 100 per cent FDI would be allowed through Foreign Investment Promotion Board (FIPB) route in marketing of food products produced and manufactured in India.

FOREIGN INVESTMENT IN DEFENCE SECTOR UP TO 100%

As per present FDI regime,

In this regard, the following changes have inter-alia been brought in the FDI policy on this sector:

FDI policy on Broadcasting carriage services has also been amended. New sectoral caps and entry routes are as under: 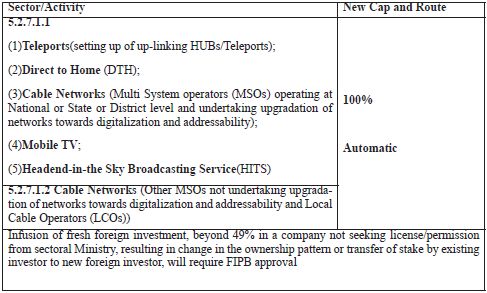 The present extant FDI policy on pharmaceutical sector provides for 100% FDI under automatic route in greenfield pharma and FDI up to 100% under government approval in brownfield pharma.

As per these amendments, with the objective of promoting the development of this sector, it has been decided to permit up to 74% FDI under automatic route in brownfield pharmaceuticals and government approval route beyond 74% will continue.

With the objective of promoting the development in the Civil Aviation sector, the government has laid the following:

FDI up to 49% is now permitted under automatic route in this sector and FDI beyond 49% and up to 74% would be permitted with government approval route.

For establishment of branch office, liaison office or project office or any other place of business in India if the principal business of the applicant is

it has been decided that approval of Reserve Bank of India or separate security clearance would not be required in cases where FIPB approval or license/permission by the concerned Ministry/Regulator has already been granted.

As per FDI Policy 2016, FDI in Animal Husbandry (including breeding of dogs), Pisciculture, Aquaculture and Apiculture is allowed 100% under Automatic Route under controlled conditions. It has been decided to do away with this requirement of 'controlled conditions' for FDI in these activities.

It has now been decided to relax local sourcing norms up to three years and a relaxed sourcing regime for another five years for entities undertaking Single Brand Retail Trading of products having 'state-of-art' and 'cutting edge' technology.

Apart from liberalizing and simplifying the FDI Policy, the amendments are meant to provide ease of doing business in the country leading to larger FDI inflows contributing to growth of investment, incomes and employment and job creation in India