In steps to further liberalise and simplify the foreign direct investment ("FDI") regime in India and with the objective of providing major impetus to employment and job creation in India, the Government of India has announced sweeping changes to the FDI policy. It is stated that most of the sectors would now be under the automatic approval route except for a small negative list. The last 2 years have witnessed major FDI policy reforms in a number of sectors including in defence, insurance, broadcasting, single brand retail trading, manufacturing, civil aviation and asset reconstruction companies. Changes now introduced include increase in sectoral caps, bringing more activities under automatic route and easing of conditionalities for foreign investment. Brief details of the changes are as follows:

(a)    Food products manufactured/produced in India – 100% FDI is now permitted under the Government approval route for trading including through e-commerce.

(b)    Foreign Investment in Defence Sector up to 100% – The following changes have been made: 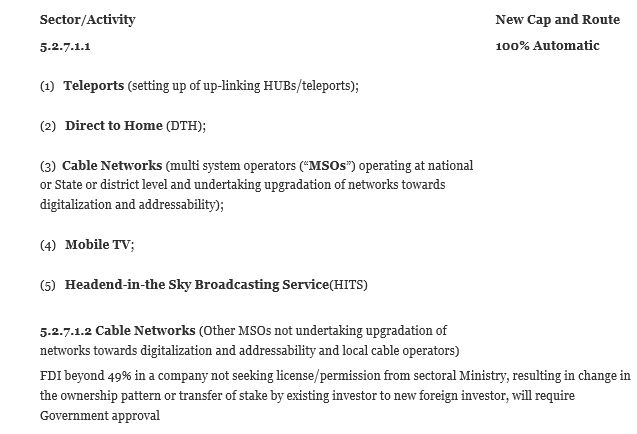 (f)     Private Security Agencies  – Upto 49% FDI is now allowed under the automatic route, beyond 49% FDI and up to 74% FDI would be permitted with Government approval.

(g)    Establishment of branch office, liaison office or project office – If the principal business of the applicant is defence, telecom, private security or information and broadcasting and where Government approval or license/permission from the concerned Ministry/Regulator has already been granted, approval of the Reserve Bank of India or separate security clearances would not be required.

(h)    Animal Husbandry – The requirement of "controlled conditions" specified for FDI in animal husbandry (including breeding of dogs), pisciculture, aquaculture and apiculture, has been done away with.