Following recent accusations of widespread, systemic sexual misconduct at the family-run video game company Ubisoft, CGLytics has assessed the company's financial performance and corporate governance practices. With reports of a toxic culture and sexism, how does Ubisoft's board diversity (including gender diversity), board effectiveness and director expertise measure up?

Ubisoft, best known for the Assassin's Creed franchise, has been shaken by allegations of serious misconduct. Reported cases include 'subtle forms of sexism' and 'sexual assault' and were apparently mishandled by the company's human resources department. These reports come as the video gaming industry faces its own #Metoo movement.

Serge Hascoët (chief creative officer and considered number two at Ubisoft), Yannis Mallat (managing director of Ubisoft's Canadian studios) and Cécile Cornet (global head of human resources) have resigned; the latter only having left her position, not the company.

Chief executive (CEO) of the family business, Yves Guillemot, made a speech via video distributed to all employees on July 21, 2020. In the video, an apology was made, and he announce several new measures being put in place. These included the creation of a "Support and Recovery Centre" in order to put victims in contact with specialized psychologists, trainings for the prevention of harassment and discrimination, and the overhaul of HR services. Mr. Guillemot insisted on improving diversity stating, "We have started the process to recruit three new VPs. The profiles belonging to under-represented and diverse groups will be privileged".

Further testimonies shone the light on how female characters have been discarded or relegated to second place in the firm's video games, notably in the Assassin's Creed franchise. According to Bloomberg, developers attested that both the marketing department and Serge Hascoët suggested that they "would not sell".

On reviewing the diversity of Ubisoft's board, it is revealed that there are deficiencies and improvements needed. Only recently appointed John Parkes is a non-French member, meaning that only 8% of the board are non-local. More importantly, Ubisoft has not met the French corporate governance code recommendation of at least 40% gender diversity representation on the board. The company currently has four female board members, which constitutes 33% of the board. Moreover, the Ubisoft shows an independence ratio of less than half (42%), which also seems to contradict the code's recommendations. Perhaps contributing to the poor diversity and independence score is the fact that in July 2020, the Ubisoft board appointed Mr Parkes; a dependent director to replace female independent director, Frédérique Dame. 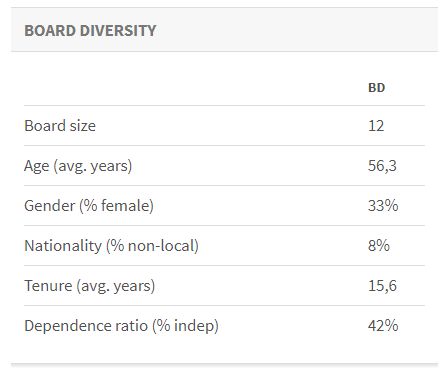 CGLytics data also suggests that the company has a relatively unsound board compared to most of their peers. Specifically, as certain Board members Yves Guillemot, Michel Guillemot, Claude Guillemot, Christian Guillemot and Gerard Guillemot - all of whom are executives - have spent over three decades on the board since their respective appointments in 1988, affecting the average tenure on the board.

A scandal likely to hit the company's financial results

Nonetheless, Ubisoft reported a successful first quarter of its 2020-2021 fiscal year. People having been quarantined due to the coronavirus pandemic undoubtedly helped achieve a 17.6% rise in sales (to EUR 427.3 million). The video games maker also saw its net bookings amounting to EUR 410 million between April and June (an increase of 30.5%), beating the target (EUR 335 million). For the current quarter, however, net bookings are expected to be around EUR 290 million, a decrease of 16% compared to the high performance of the same period during the previous fiscal year.

In the light of the fruitful quarter, we undertook a historical study of some key financial indicators to identify trends and perhaps understand what lies ahead for the company.

Although Ubisoft's share price continues to rise, we found that all other indicators such as EPS, ROE and TSR fell quite heavily from 2018 to 2019 and are even expected to fall much steeper considering their YTD performance on these indicators. These are indications that, despite the rather glossy first quarter results published earlier this month, the company may suffer some deeper performance issues which could be a result of their recent scandal.

Understanding Ubisoft's board effectiveness and expertise

Using CGLytics's board effectiveness tool, it is found that Ubisoft's board attains an effectiveness score of 55%. This score is derived from 13 key board effectiveness attributes, benchmarked against corporate governance codes and standards. This mark shows that the issuer trails behind the average score of their sector peers (at 71%), and their unique peer group average.

One key metric that contributes to the score is the separation of Chair and CEO position. Considering that Ubisoft have the combined position of Chair and CEO, this is not in the company's favor. The French corporate governance code gives issuers the choice to separate the positions or to combine. In the latter case, they must appoint a lead independent director. Ubisoft has a presence of a lead director on the board.

Ubisoft's Board Composition and Effectiveness Score

Gaps revealed on Ubisoft's board

Utilizing the board expertise and skills set tool found on the CGLytics platform, the analytics suggests gaps in the skills on the board. Specifically, not one of the independent directors has 'Industry' expertise, depicting their lack of ability to stay up to date with the market and trends compared to their peers. The board also has no representation of directors with governance expertise, questioning again their ability to apprehend the governance reforms promised by the company to address diversity.

Ubisoft's Board Expertise and Skills

What's to come for Ubisoft

Although reforms are expected for Ubisoft, and both changes in its governance and in its executive team have been promised, the company currently shows gaps of diversity among its senior leaders. Diversity does not only refer to the gender imbalance revealed, but also the decades-long tenure of its executive directors, plus the low ratio of foreign nationals. Not to forget the independence among its board members. Using CGLytics data and tools, it reveals Ubisoft's board poses a serious governance risk. When comparing Ubisoft's corporate governance practices to their peers', they are not meeting market standards. As Ubisoft continues to navigate through the public scandal and implement changes to corporate culture, what remains to be seen is the impact on the financials of the video games specialist.