In the aftermath of a car accident, everyone is primarily concerned with the health and wellbeing of those involved. However, it's only a matter of time before the blame game starts and you begin to hear why at least one person involved in a collision bears responsibility for the damage or injuries sustained. Usually the blame game begins right at the scene of an accident, between the people involved, the investigating officers, and the witnesses to the crash.

Regardless of who is at fault, everyone involved in a motor vehicle accident in Ontario, and many Ontarians who are involved in car accidents in other jurisdictions in North America, are eligible to receive Statutory Accident Benefits based on their level of injury. However, those injured as a result of the negligent actions of a driver or other person (for example, a bar, a road authority or a construction company) may also be able to pursue a tort claim, or a civil lawsuit, to obtain additional compensation for their pain and suffering, loss of income, medical costs, etc. That lawsuit is based on fault, which is why the blame game becomes very important.

When it comes to establishing blame or fault in these situations, it's not often a black and white. Even if you believe that you were entirely the victim of someone else's wrongdoing, it is likely that the other person's insurance company will argue that it was your own actions that contributed to the circumstances of the accident or your injuries. This is called "contributory negligence".

In this blog post, I examine some factors that may affect the contributory negligence issue, and how that impacts on the value of your claim. Before we discuss tort lawsuits and settlements, let us first review Ontario's Statutory Accident Benefits Schedule (SABS).

The Statutory Accident Benefits Schedule sets out the types of benefits that are part of all standard automobile insurance policies and establishes their limits. These benefits, which are paid based on the level of injury, regardless of fault, are commonly referred to as "no-fault benefits".

These benefits may include: 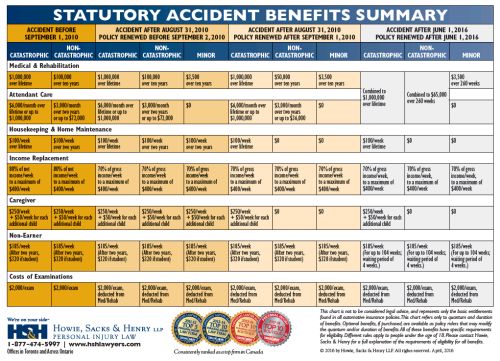 Often these benefits do not fully meet your needs – especially since the Ontario government has reduced the benefits significantly in recent years. As a result, a victim of a car accident may attempt to make a tort claim to recover some of this shortfall and to claim whatever reasonable compensation they are entitled, from whoever was responsible for their injuries and damages.

If an injury occurs as a result of someone else's wrongful act, an injured person can make a tort claim under Ontario law. This compensation is supposed to try to make the victim whole – to make up for the losses sustained as a result of the negligence of another person. Frankly, our system has been designed by the government in a way that actually prevents victims from being able to recover full compensation for their damages. That is a topic for another day.

Subject to certain restrictions in Ontario law, tort claims can be made by those injured and affected (including other drivers, passengers, cyclists, pedestrians, and in some cases family members of injured victims) in order to recover damages for:

The size of the claim is determined by the extent of those losses, the limits established by past court rulings and Ontario statutes put in place by the government, and the issue of fault or contributory negligence.

Not At Fault, But Partly To Blame: Contributory Negligence – A Primer

Ontario law recognizes the concept of contributory negligence in tort claims. Contributory negligence is the concept that an injured person's role in causing or contributing to an accident or injury should limit that person's ability to recover the full amount of the losses sustained. Unlike in some other jurisdictions, the victim doesn't have to prove that the other person is entirely, or even mostly, at-fault for their injuries. However, the victim can only recover the portion or percentage of their damages that the other person is responsible for causing. To give a simple example, if the other driver is found to be 80% responsible for an accident because they made an improper left turn, but the victim is 20% responsible for the accident because they were travelling over the speed limit, the victim can only recover 80% of whatever damages are awarded by a Court.

Sustaining an injury while driving under the influence of alcohol or drugs, even where the accident was largely the fault of another driver, can result in a significant finding of contributory negligence. Prudent drivers are expected to be aware of hazards on the roadways, including other drivers acting poorly, and they are expected to take reasonable steps to avoid accidents that they can foresee. If you are unable to take those reasonable steps because of drugs or alcohol, you can expect the allegation of contributory negligence. If you are the passenger in a vehicle operated by a driver who you know is intoxicated, you may also be shown to have contributed to your injuries by putting yourself in an unsafe situation. An intoxicated pedestrian who is hit by a car would potentially see their compensation reduced if the defendant proves the intoxication caused or contributed to the victim's injury by putting them, unnecessarily, in harm's way. There is an expectation that we will take reasonable care for our own safety. When we fail to do so, we can expect to face a contributory negligence argument.

These days, it is common to observe distracted drivers (texting or talking on the phone) and reckless drivers (speeding, tailgating, making excessive or dangerous lane changes) on our roadways. People driving in that manner, who may not be primarily responsible for an accident, may also discover that their negligent behaviour prior to an accident, if contributing in some way to the circumstances of the accident, affects the value of the award they ultimately receive. Similarly, drivers who are not adequately monitoring and responding to road conditions, checking blind spots, or otherwise attuned to their surroundings, may be found to have contributed to their injuries.

While no one wants to be met with an allegation of contributory negligence when bringing a claim against someone they consider to be entirely responsible for their injuries, there is a more important message here. Safe, defensive and attentive driving can entirely avoid accidents and the resulting life changing injuries from happening in the first place! As lawyers, we can fight for your rights to obtain the full compensation that our law permits. Sadly, we cannot turn back the clock. We cannot give you back your health or the years of your life that are affected by the accident and resulting injuries. Driving safely not only helps to prevent someone else from claiming that you were contributorily negligent, it can prevent the accident from happening in the first place.

What Can You Do To Prevent a Finding of Contributory Negligence

Of course, the most important thing that you can do is drive safely. Most vehicles have an event data recorder (EDR), or as we more commonly call it, a "black box". That device records information such as speed and braking. Given the technology in cars these days, it is likely that you cannot hide your own unsafe driving. On the other hand, being able to secure the other driver's black box data can be crucial in proving their poor driving.

Smartphone data is also commonly recorded and stored. Parties in a lawsuit are commonly asked to reveal that data if they have it, or are asked to request if from their cell phone carrier. Those requests ought to be made as early as possible in order to preserve the data. If you stay off your phone while driving, and if you are able to show a clean record from your phone company for the time in question, it will help to refute any argument that you were distracted by a hand held device.

Hospital records can often reveal whether a person involved in an accident had alcohol, or other drugs, in their system. Whether you know it or not, these tests were likely done while you were in hospital, especially if the accident resulted in serious injuries. In the right case, records should be requested regarding all involved parties. Again, the best way to avoid any contributory negligence argument in this respect is to not drive after drinking alcohol or consuming drugs!

Cameras are everywhere. A dash cam can be amazing and irrefutable evidence about the way in which an accident occurred, and any data in that respect should be stored immediately to ensure it is not lost. Additional sources of footage can be found through traffic cameras on highways, store fronts and gas stations on main streets, and residential security cameras in residential areas. This footage is often deleted shortly after it is recorded, and preserving this evidence as quickly as possible is crucial.

Witnesses are also an excellent source of information, although the law has proven time and time again that eye witnesses do not always remember events exactly how they happened. Identifying witnesses at the scene of an accident is crucial, and getting their evidence recorded as quickly as possible is equally as important. Those witnesses may also record certain events, or the aftermath of those events, with their smartphones. Asking witnesses not only what they saw, but also for any pictures or videos of what they saw, is absolutely necessary.

Not My Fault, But Still My Responsibility

It can be tremendously frustrating to be the victim of a car accident and then feel victimized again when the amount of your claim is reduced because an insurance company argues that you are partially responsible for your own injuries. Drivers, cyclists, and pedestrians can be proactive by observing safety protocols and being vigilant of their surroundings when on the road.

If, despite your best efforts, you have been unable to avoid an accident caused by someone else, you (or your family members) must speak to a lawyer immediately. By seeking legal advice as quickly as possible following an accident, you can ensure that all of the necessary evidence about how the accident happened is preserved. A personal injury lawyer with experience in handling car accident cases can help you to navigate the process of making a claim, initiate the necessary investigation, and limit any possibility that you may be found to have contributed to your injury or losses.