The White House on May 28, 2021, released President Joe Biden's $6 trillion proposed budget for federal spending in fiscal year (FY) 2022. The president's budget proposal serves as a fiscal blueprint for the administration's policy priorities and signals to Congress what the White House hopes to accomplish over the coming years. It also provides a detailed look at how the president's spending and revenue proposals would affect federal deficits and debt. It includes the administration's assumptions about how those policies would affect economic growth, inflation and interest rates.

The budget calls for $6 trillion in spending in FY 2022. Under the budget plan, the national debt would exceed the record level seen at the end of World War II within a few years and reach 117 percent of economic output by the end of 2031, up from about 100 percent this year.

The budget details the president's ambitions to expand the size and scope of the federal government. Vast new spending would be paired with tax increases on corporations and the wealthy. The budget illustrates President Biden's vision to restore the nation's infrastructure, expand the social safety net and combat income inequality with some of the highest levels of federal spending of the postwar era. The document pulls together for the first time a series of proposals unveiled over the opening months of President Biden's presidency, arguing that dramatic investments are needed to bolster a nation decimated by the coronavirus pandemic.

Nevertheless, Congress controls the purse strings. The budget is a largely symbolic document that maps out a party's priorities for spending over the next decade. The House and Senate can each pass their own budget with just a simple majority, still no easy feat in the Senate, where Democrats cannot lose a single member of their caucus.

The government is funded through 12 appropriations, or spending, bills that need to be passed by both chambers of Congress and signed into law by the president. Those spending bills can be passed along party lines in the House, where Democrats control a slim majority. But they need 60 votes in the Senate, which is split 50-50. That means Democrats and Republicans will have to agree on what goes in those spending bills. With Republicans almost uniformly opposed to most of President Biden's spending and all of his tax increases, the president and allied Democrats face difficulty enacting any of it into law.

With the release of the president's full budget, Congress will now begin drafting spending bills. The House appropriations subcommittees are expected to begin the process of voting on FY 2022 spending bills on June 24, 2021, with full committee votes held June 29 through July 16. Voting in the Senate is expected to begin the following month. Congress has until September 30, 2021 - when FY 2021 funding levels lapse - to pass new spending bills to prevent the government from partially shutting down on October 1, 2021. There remains a high likelihood that Congress will be unable to meet this deadline and will be required to enact a Continuing Resolution to keep the government functioning until a spending deal is reached. 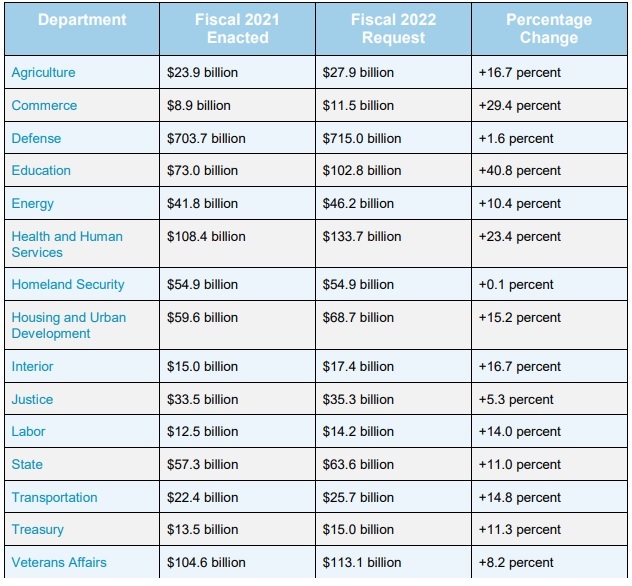