Employees aren't just bringing themselves to work but their political, environmental and social concerns too. And they expect their employers to be on their side

What is more, employees are increasingly rejecting the expectation that their personal views should stay at home. Black Lives Matter, Pride and #MeToo have become movements that staff rally around and companies are struggling to keep up.

Just remaining silent on an issue is to risk being seen as complicit in it. For example, when Disney CEO Bob Chapek failed to openly oppose California state's decision to ban gender identity discussions in primary schools, this led to a staff protest.

Taking a political position on an issue, such as Google, Amazon, Microsoft and a host of others recently saying they would pay staff travel costs to get an abortion in the aftermath of Roe vs Wade, risks the ire of opponents who take the opposing view.

There is a palpable sense that organisations, particularly global ones, encountering different cultural norms in different places, are struggling with how to apply their world view consistently across their operations.

"The challenge of what motivates employees, from environmental social governance to the position companies take on Ukraine, is key," argues Orly Gerbi at Ius Laboris Israel.

Kathryn Weaver, Ius Laboris Hong Kong, adds: "#MeToo, Black Lives Matter, Extinction Rebellion, they're all issues that have profound impact and cannot be ignored. The issue for businesses is how to accommodate these ideas, not just having policies about this sort of stuff, but needing to actually do something about it."

It's a difficult topic though. On the one hand, organisations face rising employee activism, up 40% since the start of the pandemic, according to new book Reversing The Great Resignation: Shifting Employee Values and How Leaders Can Close The Gap.

Research shows 44% of millennials and 49% of Gen Zs also say they're actively making choices about the type of work they'd do and the organisations they're willing to work for based on their values.

But, on the other hand, businesses desperate to recover and adapt are seemingly pushing staff into increasingly non-ethical behaviour. According to the Harvard Business Review, 25% of US employees say they feel compelled to engage in unethical behaviour. This could be tolerating bullying or creating toxic cultures to get sales or Google, for example, being fined billions by the EU on anti-trust issues.pic

And businesses risk getting the balance wrong in other ways. In the UK, a recent employment tribunal upheld the right of an employee to express "gender critical beliefs" in the workplace, in other words, that the gender you are born with overrides a differing gender identity. The employee who expressed those beliefs on social media had lost her job, but the tribunal ruled her beliefs were protected by law.

Data from Ius Laboris found 45% of respondents globally preferred unified HR strategies, but with some level of localisation to allow national and cultural interpretation.

However, there is by no means a consensus that being a guardian of ethics should be another extension of HR's role. While a majority (61%) argue staff should be allowed to bring their opinions to work and be able to express them, a sizeable minority (35%) still believe that if staff have an opinion on something controversial, they should avoid letting it impact colleagues or their company. 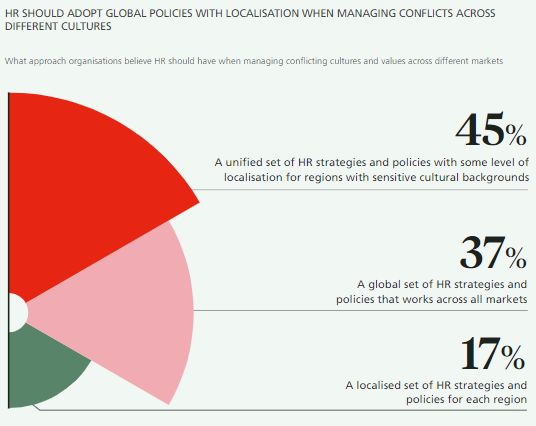 So is a consensus possible? "There is absolutely the requirement for a deeper examination around what can we truly do to create a welcoming, developing, supportive work environment to a community of colleagues," says Theresa Palmer, head of diversity and inclusion at BAE Systems Digital Intelligence.

The Ius Laboris research finds respondents would prefer staff to speak up, but in a safe way. They broadly (31%) want employees to follow strict rules for bringing their activism forward to create a safe space for others (46%).

Some employers are being proactive in educating staff about how to do respectful postings of their views. "We have run some training for employees to actually help guide them around their views and ensure they are broadcasting them in an appropriate way," says Sarah Draper at Rider Levett Bucknall. "We've also talked about Black Lives Matter and put communications out to the business that actually shared people's experiences."

But whether activism, by its very fluid nature, can possibly follow such regulatory framing is a moot point.

"What's clear is that social media amplifies any suspicion companies are not being faithful to their promises. I don't think companies can really survive unless they do take a view on moral issues," says Burkard Göpfert at Ius Laboris Germany. "It's impossible to navigate a company in a neutral position. I think companies will now have to engage with activism, rather than see it as the enemy."