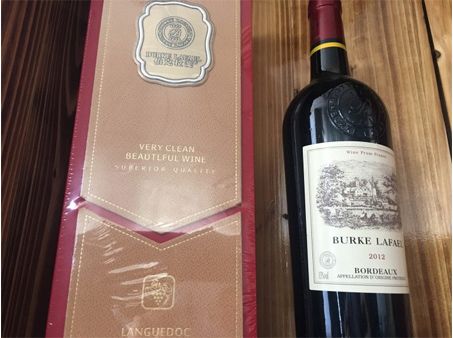 The counterfeiter has been found guilty and given an 18-month suspended prison sentence by the Court. In addition to the suspended prison sentence, the conviction also included a fine of 100,000 RMB for the company involved and 50,000 RMB to be paid by the guilty individual, for a trademark counterfeiting offence involving a batch of nearly 10,000 bottles, the CIVB said.

"Bordeaux became the first collective brand to win a victory in criminal proceedings in China (for both Chinese and foreign brands)", announced the CIVB.

In February of 2019, the defendant Mr. Zhuge commissioned others to design and produce the label bearing "BORDEAUX" affixed to the package of the company's filled wine bottles without the authorization from CIVB. Later in March of 2019, the fake Bordeaux wines had been showcased at the Chengdu Wine Fair, which were removed after mediation by Chengdu authorities.

Later the case was passed to Shanghai from Chengdu authorities, with the CIVB offering technical support.

"Since the company has brought the products to the exhibition, they are likely to have a certain scale of production and are still committing infringements", as mentioned by PAN Chunsen, the person in charge of the Enforcement Inspection Division of the Intellectual Property Office of Shanghai Pudong New Area. 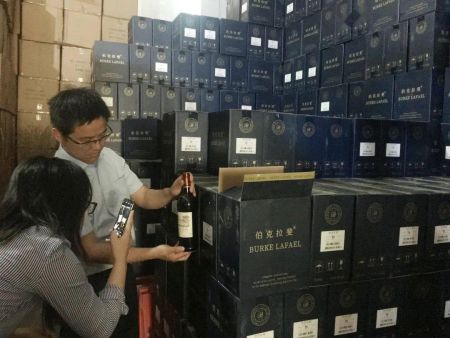 After several inquiries, according to the address and an inconspicuous phone number on the bottle body, it was found that the actual business location, warehouse and defendant's residence were located in different area of Shanghai. The enforcement actions were launched simitaneously against 3 locations. Finally, the illegal facts on producing and selling infringing wines were seized.

"The CIVB congratulates the investment and determination of the Chinese authorities in bringing this case to a successful conclusion," said CIVB president Bernard Farges.

Undoubtedly, the production and sale of infringing goods by the parties have already constituted an infringement of the exclusive right to use a registered trademark. However, does the act meet the standard for criminal prosecution?

In accordance with article 213 and 214 of Criminal Law, Whoever, without permission from the owner of a registered trademark, uses a trademark which is identical with the registered trademark on the same kind of commodities (art. 213), or Whoever knowingly sells commodities bearing counterfeit registered trademarks shall, if the amount of sales is relatively large (art. 214), if the circumstances are serious, be sentenced to fixed-term imprisonment of not more than three years or criminal detention and shall also, or shall only, be fined. 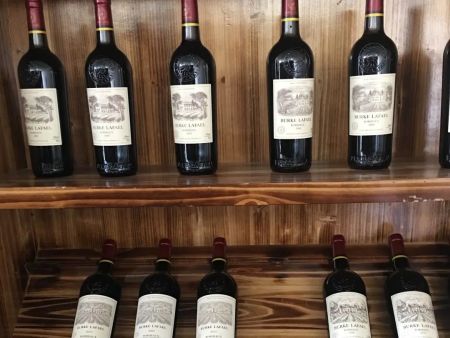 In view of the large number of goods (nearly 10,000 bottles) involved in the subject case and the large value of the amounts, which reached the standards of criminal prosecution, therefore, the criminal responsibility should be investigated.

A major milestone in a decade-long battle against counterfeits

Bordeaux gained 'geographical indication' status in China in 2015, and 45 Bordeaux appellations (GIs) were officially recognized by the Chinese government in 2016.

According to Agence France-Presse, China is the largest market for Bordeaux wines, accounting for 23% of total sales (27% of total value). Counterfeit Bordeaux wine is a stubborn problem around the whole world, also in the Chinese market, and it is of great significance for the Chinese officials to stop counterfeiting.

"This case could act as a catalyst and encourage the various Chinese authorities to pursue similar cases and bring them to a successful conclusion. Prison sentences will constitute a significant deterrent for counterfeiters." CIVB representative said in a statement.

Indeed, China has gradually become the main market of wines. Not only BORDEAUX, but also Champagne and other winemakers are seeking greater trademark protection, working in coordination with Chinese officials. Undoubtedly, the wining of Bordeaux has set a favorable precedent for them and also future cases.

Last year, the EU and China concluded the negotiations on a bilateral agreement to protect 100 European Geographical Indications (GI) in China and 100 Chinese GI in the EU against imitations and usurpation.

The wining of Bordeaux on GI collective trademark coincided with the bilateral agreement and also demonstrated the determination of China to strictly and equally protect intellectual property rights.

ARTICLE TAGS
China Intellectual Property Trademark
POPULAR ARTICLES ON: Intellectual Property from China
Patent Law in India
Anand & Anand
The Patents Act 1970, along with the Patents Rules 1972, came into force on 20th April 1972, replacing the Indian Patents and Designs Act 1911. The Patents Act was largely based on the recommendations of the Ayyangar Committee Report headed by Justice N. Rajagopala Ayyangar. One of the recommendations was the allowance of only process patents with regard to inventions relating to drugs, medicines, food and chemicals.
Assignment And Licensing Of Copyright
Singh & Associates
Copyright is a protection given to the creators of certain types of works as an acknowledgment to their intellectual input
New Aussie Domain Name
Davies Collison Cave
A new Australian domain name, .au will be available from 24 March 2022. Australian individuals, businesses, and organisations will be able to register their existing and new domain names in the .au domain name space...
Patent Specification - Where The Rubber Meets The Road
Singh & Associates
In order to obtain a patent, an applicant must fully and particularly describe the invention therein claimed in a complete specification.
Compulsory Licensing In India
Khurana and Khurana
WIPO defines patent as an exclusive right granted for an invention, which is a product or a process that provides, in general, a new way of doing something, or offers a new technical solution to a problem
What Can Be Patented In India?
Intepat IP Services Pvt Ltd
Sections 3 and 4 of the Indian Patents Act, 1970 specifically state exclusions to what can be patented in India.
FREE News Alerts
Sign Up for our free News Alerts - All the latest articles on your chosen topics condensed into a free bi-weekly email.
Register For News Alerts
Article Tags
China Intellectual Property Trademark
Related Articles
深セン検察院、「知的財産権刑事法律保護活動白書」を発表 Kangxin
被称为"宝藏"的商标查询功能，究竟有多强大？ Kangxin
Q&A: Pharmaceutical Trademark Enforcement In China Kangxin
심천 검찰원은 《지적재산권 형사 법률 보호 업무 백서》를 발표하였다. Kangxin
중국 자동차 제조사들이 EV 배터리 교환 분야의 진입을 가속화하는 특허 출원을 늘렸다 Kangxin
Mondaq Webinars
Investigations and eDisclosure: Drive Down Costs by Understanding Key Data Points Early
OpenText UK Limited
Webinar Berkshire UK
Future Series: Oh Canada! Key Legal Issues for International Companies
Borden Ladner Gervais LLP
Webinar Toronto Canada
More Webinars
Comparative Guides
Cartels
Franchising
International Arbitration
Merger Control
Trademarks
More Guides
Mondaq Advice Centres
Global
Trademarks in SAARC Countries
More MACs