On September 18th, representatives of DeHeng Law Offices were invited to attend the roundtable meeting on "Doing Business in Latin America" organized by the Legal 500 and Affinitas. The roundtable meeting brought together a number of the leading partners from international and domestic firms in China to discuss the matters they advised on and the challenges they faced in Latin America. Affinitas member firms in Mexico, Colombia, Peru and Chile also attended the meeting and shared their experiences of the local market. Mr. Harrison Jia, Partner of DeHeng Law Office and Secretary General of Belt &Road Service Connections, was invited to attend such meeting and shared his thoughts as below on "Doing Business in Latin America":

1.Have you seen an evolution of types of Chinese investors/businesses taking an interest in the Latin American market (and especially in Mexico, Colombia, Peru and Chile)?

2.Is interest still driven primarily by SOEs or are you receiving more enquiries from private entities?

Most of clients of DeHeng are still state-owned enterprises, such as China Tobacco, Sinotruk, China Cable, China Railway, etc., and some of them are private companies such as Chang You. It is observed that between 2000 and 2017, in terms of the number of transactions, private companies gradually overtake state-owned enterprises. According to statistics, in 2017, private enterprises accounted for 68.89% of the total investment in Latin America. However, the investment of SOEs still prevails in terms of the transaction amount and the amount of employment created. Between 2000 and 2017, state-owned enterprises invested a total of 91.398 billion US dollars in the region, accounting for 74.59% of the total amount of investment, and the number of jobs created accounted for 52.26% of the total. In terms of investment type, the investment projects of SOEs are concentrated in capital-intensive sectors, and the average scale of the projects is larger than private companies, while the private enterprises mainly focus on new investment projects with smaller scale and less capital intensity. 2

3.Which countries are proving to be most popular for Chinese investors entering the Latin America market?

4.Which sectors are you seeing most interest in?

Raw materials, manufacturing, agriculture, infrastructure, and services. (As mentioned above)

5.What are the advantages and disadvantages of investing in Latin America for Chinese entities?

Second, Latin American countries are in great need of investing in their own infrastructure, some countries have proposed to double the current level of infrastructure investment. This provides a broad range of investment opportunities for Chinese companies.

Political risks: Political risk is currently the main risk faced by Chinese companies investing in Latin America. Political risks involve many aspects, such as government instability, changes of socio-economic environment, changes of investment promotion policies, internal and external conflicts, corruption and so on.

6.What effects is Chinese investment having on pricing?

7.What are the challenges for Chinese investors wanting to invest in Latin America? How can they best plan those challenges in advance?

First of all, Chinese companies wanting to invest in Latin America may face the challenge of coordinating relationships among various stakeholders. The geographical distance between Latin American countries and China, as well as the huge differences in language, culture, social customs and legal norms, have caused considerable problems for Chinese enterprises. Especially at the political level, affected by historical and social development factors, the elite ruling class in Latin American countries is seriously separated from the lower groups, with different demands and conflicts on both sides. The ruling party and the opposition are often at odds. The media, which plays an important guiding role in public opinion, is often controlled by different parties and local interest groups. As a result, once Chinese enterprises investing in Latin America fail to coordinate various type of relationships, they will be potential risk of being attacked and blamed by different interest groups.

Secondly, a large number of China's investment in Latin America is driven by government authority. The officially-led, government-driven investment model could lead to an impact on other Latin American stakeholders and cause a series of troubles. On the one hand, there may be cases where the investment project does not match the local market demand. On the other hand, some investment opportunities are created by Chinese government through high-level exchanges, so that Chinese companies may get support of financing and market development. This may result in negative impact on relevant stakeholders, such as the attack from opposition parties or local competitors etc.

For the above challenges, Chinese investors may try the following adjustments to best plan in advance. Chinese enterprises should strengthen their management, actively establish internal control of compliance, accelerate the localization of enterprises, comply with local laws and regulations and adhere to business ethics. Meanwhile, Chinese enterprises may also strengthen investigation and supervision of local business partners to avoid being responsible for unlimited joint and several liability. Investors should learn from the experience of risk management from some international companies, strengthen the estimation of potential risks and work out risk control plans in advance.

Second, Chinese investors should continue to optimize and expand investment areas. Latin American countries are now adjusting their investment strategies to reduce the proportion of FDI inflow of energy and mineral sectors. Chinese companies may follow this trend to increase investment in high-tech industries such as manufacturing, telecommunications and clean energy, and make more contributions to local scientific and technological innovation.

8.Do Latin America-based clients understand how Chinese entities operate? What are the common issues you encounter?

9.What is the most common question China-based clients ask you when dealing with Latin American investments?

The most common questions China-based clients ask when dealing with Latin American investments are the local policies of host countries, including labor policies, environmental policies and tax policies, etc. In terms of labor policies, due to the high degree of democratization in Latin America, the strong awareness of ordinary citizens in political participation and the large power of trade unions, Chinese enterprises have encountered labor problems for many times because of great difference in labor protection. In terms of environmental policies, Chinese companies often have to comply with the complex administrative licensing system of the investing country. For example, in Brazil, Chinese investors need to deal with cumbersome environmental approval process to carry out construction project. Finally, in regards to tax policy, Latin America countries generally have complex tax systems with lower stability. Brazil's tax policies are complex and complicated, and the central and local tax systems are also different. Therefore, how to make a good tax planning is also a major issue for Chinese investors.

10.Are Chinese corporate counsel playing a greater role in their companies' business matters in Latin America?

At present, Chinese and Latin American parties usually stipulate dispute resolution clauses as negotiation, arbitration or litigation, and enterprises rarely resolve disputes through mediation. As more and more countries join the Singapore Mediation Convention, mediation provides another effective dispute resolution for Chinese and Latin American companies. The Belt and Road International Commercial Mediation Center (BNRMC) Internet Mediation System has been developed and put into operation in October 2016. Since its establishment, BNRMC has built a team of experienced professional mediators, consisting of 265 outstanding legal scholars and professionals from all over the world, including China, Ecuador, Brazil and other countries. BNRMC has mediated more than 500 commercial disputes with a success rate of nearly 70% so far. In the future, it is expected that professional mediation agencies and law firms will play an increasingly important role in the mediation of the Chinese and Latin American parties in dispute resolution.

11.How do clients expect their China and Latin America-based firms to manage a cross-border matter?

In cross-border investment towards Latin America, China-based clients mainly have the following expectations: first, the clients expect that they can strengthen their adaptability to the investment rules of the host countries, get command of a good predictive ability of local economic development strategies, regulations, and policy trends through the assistance of corporate councels and through due diligence. Second, the clients hope that they can strengthen cultural integration and the localization of enterprises. Third, they hope to better manage and control the risks of exchange rate, and use various financial instruments and legal protection clauses to avoid exchange rate risks.

12.What are the future trends in China to Latin America investments?

The investment field will gradually become more diversified. As Huawei and ZTE entered the telecom industry, BYD Auto, Chery Automobile and Jianghuai Automobile entered the automotive industry, China's investment diversification pattern in Latin America has gradually been established, and manufacturing, infrastructure and agricultural sectors gradually became new growth points. According to the ECLAC report, in 2004-2010, metal and fossil fuels accounted for 42% and 18% of China's announced investment in Latin America respectively, and by 2011-2017, the proportions of the two fell to 20% and 6% respectively. In contrast, China's investment in Latin America's telecommunications, real estate, food or renewable energy industries has risen. In terms of mergers and acquisitions, the energy sector has been the main target for Chinese companies to conduct M&A in Latin America. In the future, China's M&A in the fields of oil and natural gas and renewable energy are expected to continue to increase, and M&A in the public utilities sector is expected to be increasing. 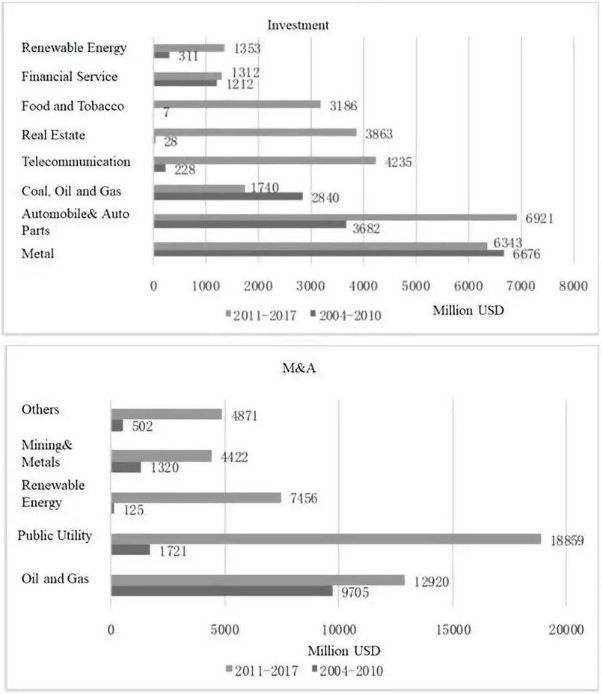 Source: CEPAL，Exploring new forms of cooperation between China and Latin America and the Caribbean，Jan．2018，p. 57．

ARTICLE TAGS
China Corporate/Commercial Law Corporate and Company Law M&A/Private Equity Litigation, Mediation & Arbitration Arbitration & Dispute Resolution
POPULAR ARTICLES ON: Corporate/Commercial Law from Worldwide
Can I terminate a business contract due to coronavirus?
Cooper Grace Ward
It is important to do a proper legal analysis before seeking to terminate, based on COVID-19.
The frustrating impact that the Coronavirus (COVID-19) may have on your commercial contracts
Bartier Perry
As COVID-19 continues to spread throughout the globe, the effects are felt on international trade and supply chains.
Coronavirus: A force majeure to be reckoned with?
Hazelbrook Legal
Force majeure clauses may provide some relief for parties to contracts affected by the damaging consequences of COVID-19.
COVID-19: what are the key implications for boards and corporate disclosure?
Corrs Chambers Westgarth
Article addresses practical steps that boards need to take to protect their businesses & discharge their directors' duties?
Are you a company ‘officer'? High Court clarifies the scope of Corporations Act definition
Cooper Grace Ward
HC considered the scope of the definition of company ‘officer' & commented about its application in various contexts.
ASIC Win In High Court Means Broad Definition Of Company "Officer"
Clyde & Co
In a recent decision, the High Court of Australia has provided important clarification about the meaning of the term ‘officer' within s.9 of the Corporations Act.
FREE News Alerts
Sign Up for our free News Alerts - All the latest articles on your chosen topics condensed into a free bi-weekly email.
Register For News Alerts
Article Tags
China Corporate/Commercial Law Corporate and Company Law M&A/Private Equity Litigation, Mediation & Arbitration
Arbitration & Dispute Resolution
More Tags
Similar Articles
Powered by mondaq AI
MATCH
76%
Chinese ODI And M&A In Latin America: New Features Of A Current Trend Carey
Related Articles
How Are Your Contracts Affected By The Coronavirus? IPO Pang Xingpu
Strategies for dealing with legal compliance in China R&P China Lawyers
Applicability Of Force Majeure In The Light Of Coronavirus Outbreak IPO Pang Xingpu
Novel Coronavirus (COVID-19) Presents New Legal Challenges In China WilmerHale
Q4 2019 Quarterly VC Update: Nisa Leung On The State Of Venture Capital Investing Cooley LLP
Comparative Guides
Merger Control
Trademarks
Mondaq Advice Centres
Global
Investment Immigration
Global
Trademarks in SAARC Countries
More MACs
Upcoming Events
Mondaq Social Media