On May 22, 2019, the Brazilian Senate approved the Draft Legislative Decree No. 98/2019, which allows Brazil adhesion to the Madrid Protocol, the International Trademark System. The system is expected to start operating in October 2019 at the National Institute of Industrial Property (INPI).

Created in 1989 and in force since 1996, the Madrid Protocol is an international treaty administered by the World Intellectual Property Organization (WIPO) established to create a centralized system of trademark protection for all the signatory states.

The main advantages of the system are: the reduction of filing and management costs, the higher predictability in response time, the simplification of the whole procedure and the permanent monitoring for trademark management in all the countries where the trademark is registered.

Currently, 104 contracting parties are signatory to the Madrid Protocol. In Latin America, only Colombia, Cuba and Mexico are part of the Protocol.

As previously explained in our blog, with Brazil's upcoming adhesion to the Madrid Protocol, the INPI needs to overcome a series of obstacles for a smooth integration into the Protocol requirements.

Firstly, as a rule of the Protocol, the examination of an application must be carried out within 18 months from the filing date. This was one of the main issues to be solved by the INPI, due to its known backlog problems. 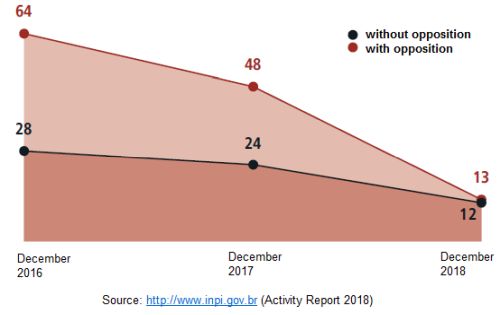 Secondly, the Draft Legislative Decree No. 98/2019 establishes Spanish and English as the possible languages for a trademark application filed through the Madrid System. Taking into account that the INPI's working language is Portuguese and all applications are filed in this language, the INPI´s operational procedures will have to be changed, the IT systems updated and the staff trained.

Finally, the INPI will have to implement further relevant measures to align with the procedures of the Madrid Protocol, such as:

Currently there are public consultations open regarding the implementation of the above measures. The consultation about multi-class registrations will close on June 13, 2019, whereas the one regarding co-ownership will be open until June 20, 2019.

Adhering the Madrid Protocol could boost exports and internationalization of national brands abroad, and make it easier for international companies to operate in Brazil. Moreover, Brazil's adhesion to the treaty could even prompt other Latin American countries to join soon.