The latest Smith & Williamson Enterprise Index has revealed that confidence in the economy is on the up.

What do the numbers mean?

As mentioned above, the inaugural survey, carried out in January of this year, recorded a positive outlook as far as the economy was concerned, whilst quarter two saw a significant dip in respondents' optimism. However, it appears that the confidence felt by the UK's wealth creators at the start of the year has returned with a vengeance.

Since the last survey was recorded in April of this year, optimism concerning the economy across a variety of factors has risen by 12.7%. Reflective of this increase is the overwhelming 73% of respondents who said that they expect the UK economy to improve in the next 12 months, with the majority of the wealth creators we asked are planning for either growth or acquisition within their businesses over the next year.

This sign of a pick-up in confidence covers an expansive range of sectors including services, construction and manufacturing.

Hot on the heels of a raft of optimistic data for the UK economy, the positive sentiment that the index has revealed correlates strongly with all of the latest headline measures for the economy that have shown that GDP is forecast to grow by 1.2%in 2013, that the UK construction sector is showing further signs of recovery and that housing activity, manufacturing and new car registration figures are on the rise.

Most respondents welcomed the fact that the Royal Bank of Scotland has launched an independent review of its lending to small businesses. RBS have hired former Bank of England deputy governor Sir Andrew Large and management consultancy Oliver Wyman to examine its lending practices and RBS say that the purpose of the review is to identify how the bank can improve its support to small and medium enterprises (SMEs) while preserving thorough lending practices. The majority of those surveyed believed that this should be a practice that all of the banks take note of and replicate.

Staying with the topic of lending and lending practices, it is perhaps not surprising that 90% of those we questioned felt that payday lending firms should be subject to greater regulation, something which is expected to be decided on by the Competition Commission by the end of 2014.

Despite the obvious appetite for growth and a belief that headcounts will increase within most of the respondents' organisations over the coming 12 months, very few of those asked feel that the employment pool is adequately educated or trained.

This is clearly a problem and, as the economy picks up, the UK needs to produce more skilled and trained workers to maintain this trend. As CBI research recently highlighted, 32% of businesses are frustrated with some school and college leavers basic literacy and numeracy and according to the CBI's survey, 31% reported that young people lack the technical skills they need.

'Out of intensive care'

These results undoubtedly show that entrepreneurs are planning for growth and as we get further away from the recession, it's not just the entrepreneurs who are optimistic; Britain's consumers have become more optimistic than at any time since October 2009.

The chancellor, George Osborne, maintains that the UK is now, 'out of intensive care', and our survey results support this. It is great news that the majority of entrepreneurs who took part in the index are planning for headcount growth within their organisations this year. However, whilst it seems that many of the UK's wealth creators believe that the employment pool is inadequately trained, perhaps more emphasis should be put on up-skilling, whereby entrepreneurs take inexperienced but enthusiastic staff and then train them in their roles.

Do you expect the UK economy to improve in the next 12 months?

As mentioned above, the results of this quarter's index correlate strongly with the recent raft of optimistic data for the UK economy - data that has revealed that output rose by 1.5% from a year ago, that exports rose at the fastest pace last quarter since late 2011 and that business investment grew faster than household spending.

This broadly based pick-up in activity would seem to indicate that the UK's recovery is on a far steadier footing.

Martyn Dawes, founder of Coffee Nation who addressed entrepreneurs and business owners at this quarter's index launch event says that, "I think the UK is in a good position at the moment. There is confidence and I think entrepreneurially you can't have a better time to start a business. There is a confident mood and this creates a great environment for businesses. I do think we can have more focus on helping entrepreneurs to grow their businesses, not just getting them started. That said Britain is well placed at the moment and the future is looking bright for once." 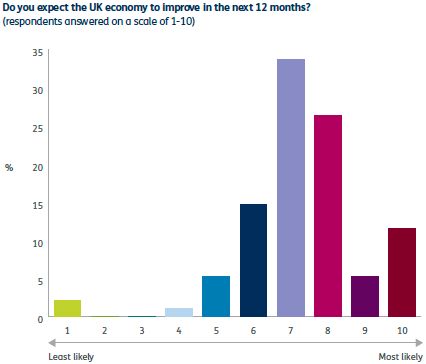 RBS have recently announced a review into small business lending. Should all banks be doing the same?

The Royal Bank of Scotland (RBS) has recently launched an independent review of its lending to small businesses. The bank has hired former Bank of England deputy governor Sir Andrew Large and management consultancy Oliver Wyman to examine its lending practices.

Our survey indicated broad support for this initiative with 96.7% of respondents in favour and a belief that other banks should replicate this approach.

Peter Jones, director of Versatile Connections said, when asked about the review that, "I think we have got incredible entrepreneurs in this country, people who are keen to start businesses with great ideas, but the hardest thing is actually getting that bump start. It isn't always a lot of money, even trying to get a loan for £5,000 to get started up, banks make it difficult. It is a bit like a closed shop. There are no longer the personal relationships with the banks. I think it would be better for the banks, and the economy as a whole, if those in positions of power at the banks understood business a lot more." 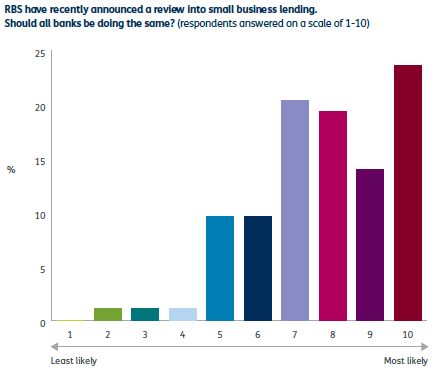 Will the HS2 Project represent value for money for the UK economy?

The majority of our index respondents indicated that they don't view the HS2 project as providing value for money for the UK economy and it seems that the influential Institute of Directors agree; they recently became the latest voice to join growing calls for the Government to scrap the high-speed rail project HS2 saying that, "businesses know value for money when they see it, and our research shows that they don't see it in the Government's case for HS2".

As a result, Simon Walker, the IoD director general said that, "The IoD cannot support the Government's current economic case for HS2". 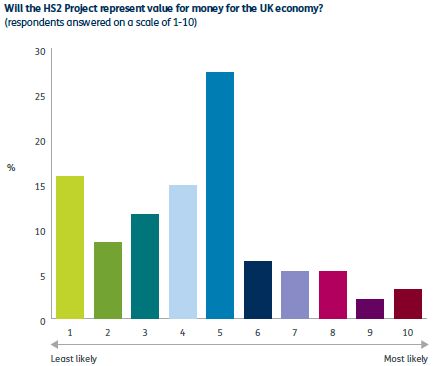 If your business exports, do you expect your export turnover to increase in the next 12 months?

Ernst & Young say that across the UK, exports are not growing fast enough and forecast 0.3% annual growth for UK goods exports against 1% for the European average between now and 2017.

Commenting on the results, economist Michael Baxter says that we are "making progress, but could do better".

However, contrary to the Ernst & Young prediction, the vast majority of our respondents say that they expect their export turnover to increase in 2013. 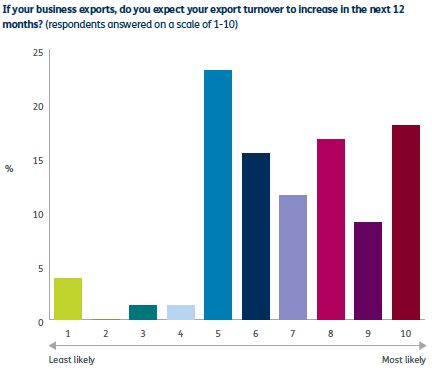 We have taken great care to ensure the accuracy of this information. However, the document is written in general terms and you are strongly recommended to seek specific advice before taking any action based on the information it contains. No responsibility can be taken for any loss arising from action taken or refrained from on the basis of this publication. © Smith & Williamson Holdings Limited 2013. 13/913 30/09/2014

ARTICLE TAGS
UK Strategy Economic Analysis
POPULAR ARTICLES ON: Strategy from UK
Benevolence, Self-expression And Sustainability In Beauty (Podcast)
Withers LLP
Aasmah talks to Violette, founder of beauty brand VIOLETTE_FR, about finding her way to a career as a make-up artist, the importance of diversity and sustainability in beauty and how her mistakes...
Implementing A Strategic Plan Successfully
TCii Strategic and Management Consultants
Strategic planning is crucial to profitable business growth, but companies typically realise only about 63% of their business strategy's potential financial value because of defects and breakdowns in strategic planning and implementation.
Disclosure Is Changing: Get Ready
Clyde & Co
The Disclosure Working Group is seeking views on the proposals in a consultation which is open until the end of February 2018.
Always A Good Time To Buy A Second-Hand Car
Deloitte
We are taking a break from the turmoil in equity markets to consider a more parochial question – used car prices.
FCA Business Plan - What Firms Can Expect From The FCA In 2015-16
Deloitte
Contrary to previous years, the FCA has not published a separate Risk Outlook, but has instead included this as part of the Business Plan.
Intelligent Right-Sizing: Reducing Headcount In A More Sustainable Way
Deloitte
The current economic downturn is forcing companies to look hard at their costs. However, unlike previous downturns, and in part because of them, many executives have recognised the need to reduce headcount and costs in a more sustainable manner.
FREE News Alerts
Sign Up for our free News Alerts - All the latest articles on your chosen topics condensed into a free bi-weekly email.
Register For News Alerts
Article Tags
UK Strategy Economic Analysis
Related Articles
Benevolence, Self-expression And Sustainability In Beauty (Podcast) Withers LLP
Defining Moments Interview Series: Sabrina And Idris Elba Withers LLP
Do You Want The Leather Upholstery? Why Saving On Project Resources Can Be A False Economy 3Kites Consulting
Defining Moments Interview Series: Mary Portas Withers LLP
Defining Moments Interview Series: Edward Barber And Jay Osgerby Withers LLP
Mondaq Webinars
UK Construction Law Update: What happened in 2021? What can we expect in 2022?
Charles Russell Speechlys LLP
Webinar London UK
New Legislation Paves the Way for the Future of Aviation
HarleyJames Law
Webinar Nassau Bahamas
More Webinars
Comparative Guides
Anti-Corruption & Bribery
Artificial Intelligence
Banking Regulation
Blockchain
Cartels
More Guides
Mondaq Advice Centres
UK
Coming to and Investing in the UK
Global
Trademarks in SAARC Countries
More MACs