Indonesia: Establishing A Presence In Indonesia – What You Need To Know

This article is the second in CNPUpdate's new series on Indonesia Investment Updates, and aims to provide you with a general overview of the laws and regulations governing foreign investments into Indonesia.

How can I enter the Indonesian market?

Generally speaking, you can enter the Indonesian market by:

Should I establish a KPPA or incorporate a PT PMA?

Whether you should establish a KPPA or incorporate a PT PMA depends on your objective. On the one hand, a KPPA is simply a representative office established by a company that has already been incorporated outside of Indonesia. A KPPA is not a separate legal entity, and cannot engage in commercial or revenue-generating activity or participate in the management of any company in Indonesia. Although it is possible for a KPPA to refer potential business transactions back to its foreign parent company, do remember to obtain tax advice as to whether, for example, withholding taxes may apply. Once you have received the relevant approvals, you will be granted a KPPA licence, which has an initial validity period of 3 years. You can apply to extend your KPPA licence twice, with each extension having a maximum period of 1 year.

A PT PMA, on the other hand, is a limited liability company. A PT PMA can sue and be sued in its own name, and own certain rights and assets. Unlike a KPPA, a PT PMA can engage directly in sales and revenue-generating activities provided that the necessary licences and permits have been obtained and exist in perpetuity. Note also that a PT PMA must have at least one director, one commissioner, and two shareholders (to whom an annual report must be presented) at any one time, and that foreign investment regulations may limit the extent of foreign ownership in the PT PMA.

How to establish a KPPA

The KPPA will have been duly established once these documents have been obtained. Thereafter, the KPPA can proceed to sponsor applications for the relevant work and residence permits (respectively, Izin Mempekerjakan Tenaga Kerja Asing or "IMTA"; and Kartu Izin Tinggal Terbatas or "KITAS") for expatriates.

How to incorporate a PT PMA

The process of incorporating an operationally-ready PT PMA involves several steps and applications to various authorities, taking anywhere from 60 to 120 business days in total.

The PT PMA is considered incorporated once you have completed the two steps above. Once incorporated, the PT PMA must hold its first extraordinary general meeting ("EGM") within sixty (60) days. At this EGM, the shareholders of the company should ratify all acts of the promoters in relation to the abovementioned granting of powers of attorney, thereby verifying the legitimacy of the PT PMA as a legal entity. The first annual general meeting is to be held within six (6) months of the end of the PT PMA's financial year.

The third step comprises applications for several mandatory documents, licences, and approvals that must be completed to enable the PT PMA to commence operations. This includes applying for, for example and among other things:

The following table summarizes the different steps in brief: 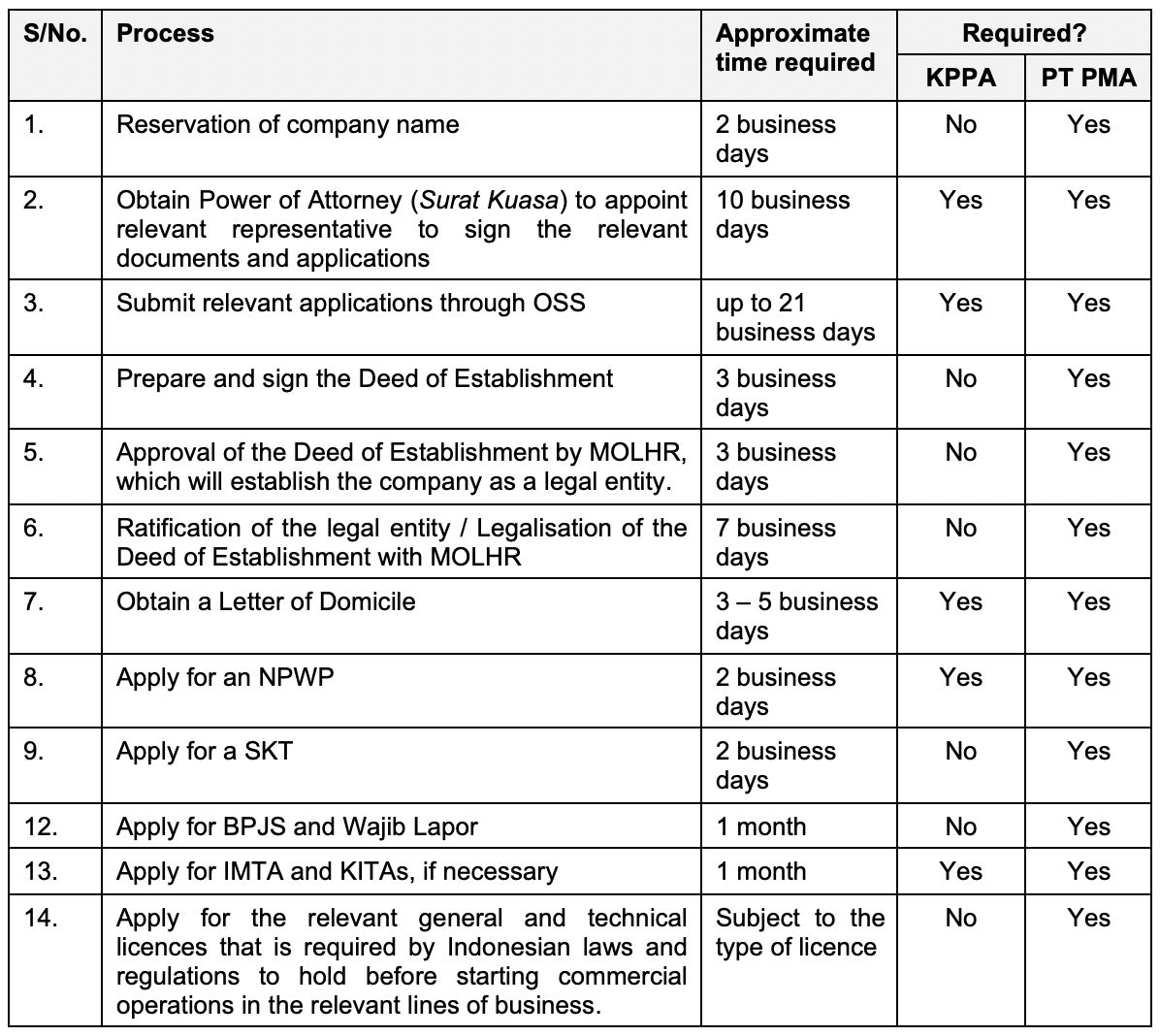 This update is provided to you for general information only and should not be relied upon as legal advice. If you have any enquiries as to the contents of this update or if you are considering an expansion into Indonesia, please feel free to contact any of the members of our Indonesia Desk, who will be able to guide you accordingly.

1. Do note that the Deed of Establishment should be signed in Indonesia. Further, where a founding shareholder (or their representative) is a foreigner and intends to travel to Indonesia to sign the Deed of Establishment, the proper visa (for example, a single- or multiple-entry business visa) should be obtained, as it is not appropriate to travel to Indonesia on a tourist visa for business purposes.

This update is provided to you for general information and should not be relied upon as legal advice.