The Constitution of India enlists labour-related legislation under the concurrent list, which means both the Central Government and the State Government are equally competent and permitted to enact labour legislations. At present, more than 45 central legislations and over 100 state legislations have been enacted for labour welfare, frequently on overlapping matters.

The Central Government has notified four labour codes to consolidate and simplify labour legislations in the country,: (i) code on wages; (ii) code on industrial relations; (iii) code on social security and welfare; and (iv) code on occupational safety, health and working conditions. This is the first of a four part series of each of these codes.

Codes on Wages, 2019 ("Wage Code" or "Code") awaits the notification of its effective date. The objective of the Wage Code is to consolidate the 4 existing labour laws relating to wages, into one integrated code. 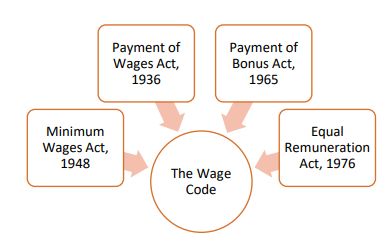 Since all four legislations govern various aspects of the same subject, i.e. wages, the Government's objective is to combine and cover all four under one statute, the Wage Code. The Wage Code is thus the first step towards implementation, enforcement, and harmonisation of the country's labour laws.

The Code is divided into separate chapters dealing with minimum wages, payment of wages, and provisions relating to the bonus.

The Code will apply to employees, both in the organised and the un-organised sector. Provisions relating to payment of wages under the Code will extend to all employees, irrespective of their wage ceiling and type of employment, whereas the Payment of Wages Act, 1936 was only applicable to factories, certain specified establishments, and to employees who drew monthly wages up to INR 24,000, while the Minimum Wages Act, 1948 applied only to scheduled employments.

Under this Code, the Central Government will make wage-related decisions for employments in the railway, mines, and oil fields, among others, whereas the State Government will make decisions for all the other sectors. The definition of 'employee' now includes contractors as well, which will ensure that even contractors are entitled to be paid minimum wages as per the Code.

The Code prescribes two separate definitions of 'employees' and 'workers'. The definition of an 'employee' includes individuals in supervisory, managerial, and administrative roles, whereas the definition of 'workers' excludes such individuals, and excludes indiviuals who are employed in a supervisory capacity drawing a monthly salary exceeding INR 15,000 while specifically including sales promotion employees and working journalists. Since the definition of employees is wide, it implies that such categories of employees will also fall under the Wage Code, unlike the Minimum Wages Act, 1948, which defined 'employee' as any person who is employed for hire or reward to do any work, skilled or unskilled, manual or clerical, in scheduled employment in respect of which minimum rates of wages have been fixed. 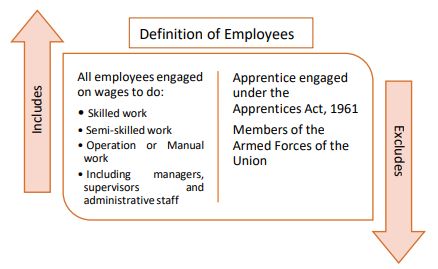 There are however, inconsistencies with respect to the wages of 'employees' and 'workers' under the Code. For example, under the Section 6(6) of the Code, for the fixation of minimum rates of wages, only 'workers' are mentioned and not 'employees'. 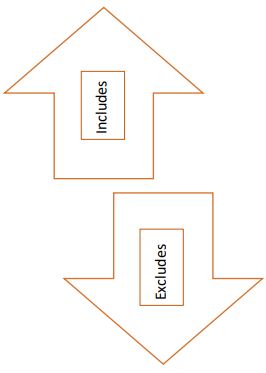 Any person employed in any industry for hire or reward to do:

The Code prohibits gender discrimination in matters related to wages and recruitment of employees for the same work or work of similar nature, except in cases where employment of women in such work places is prohibited/restricted under the laws. 'Work of similar nature' is defined as 'work for which the skill, effort, experience and responsibility required are the same'.

The Code has detailed the definition of 'employer' to include an occupier or manager of a factory, a person having ultimate control over the company affairs, managing director, contractor, and legal representative of a deceased employer in addition to the regular definition of a person who employs employees in its establishments.

The existing law did not include such a definition, or only defined it in relation to factories and establishments where authorities have ultimate control over the company. This was insufficient and therefore created ambiguity with determining the nature of an employer.

The definition of 'wages' has been included within the Code to include all remuneration that can be expressed in terms of money, including salaries, allowances, etc.

The Code prohibits employers from paying wages lesser than the prescribed minimum wage. Minimum wages will be notified by the Central and State Governments. These minimum wages shall be determined taking into account the skills of workers, geographical areas, hours of work or piece of work, arduousness of work such as temperature, humidity, hazardous occupations, or processes etc. The Code uniformly applies to all employees across an organisation.

The minimum wages will be revised and reviewed by the Central or State Governments at intervals of not more than 5 years.

A new clause on payment of wages has been introduced, which allows payment to be made in current coin, currency notes, by cheque, by crediting the wages in the bank account of the employee or by electronic mode.

Under the Code, the wage period is now fixed by the employer either as daily or weekly or fortnightly or monthly, in order to ensure that the wage period does not exceed 1 month. 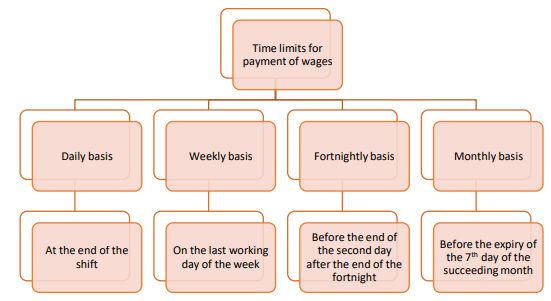 The time limit for payment of wages has also been prescribed. In a case where an employee is removed, dismissed, retrenched, resigns, or becomes unemployed due to closure of an establishment, the wages shall be paid within 2 working days of such removal, retrenchment, or resignation. This definition now also includes 'resignation' which is an important consideration for the employer to keep in mind.

The appropriate government may fix the number of hours that constitute a normal working day. In case the employees work in excess hours of a normal working day, they will be entitled to overtime wage, which must be at least twice the normal rate of wages.

Provisions on payment of bonus under the Code are applicable to all employees whose wages do not exceed a specific monthly amount as notified by the appropriate government. Bonus will be paid out of allocable surplus (calculated in respect of any accounting year, after deductions for depreciation, direct taxes or such other sums prescribed by Central Government from gross profits for that year), which is at least: (i) 8.33% of wages; or (ii) Rs. 100, whichever is higher.

An employee can receive a maximum bonus of 20% of his annual wages, in a financial year. The Code also lays down the calculation of set on and set off for the allocable surplus post the 5 th accounting year in which the employer sells the goods produced or manufactured or services provided. All departments or undertakings or branches of an establishment shall be treated as part of the same establishment for the purposes of computation of bonus under the Code.

The bonus shall be proportionately reduced in the event the employee has not worked for all working days in an accounting year, by adjusting the minimum bonus if such bonus is higher than 8.33% of the salary or wage of the days such employee has worked in that accounting year.

As a step forward, the disqualification for conviction of sexual harassment is now an additional provision, which did not exist under the repealed laws. All eligible employees will need to be paid bonus within 8 months from the close of an accounting year.

The Code provides for the appointment of an Inspector-cum-Facilitator to carry out inspections of employers and employees for better compliance. Further, the Inspector-cum-Facilitator will also reserve the right to examine any person on the establishment premises and seize, search, or take copies of wages, as he/she may consider necessary if the employer has committed an offence. The inspection shall be conducted based on a scheme decided by the appropriate government.

Keeping in line with the digitisation initiatives of the Government, the Code now allows inspection electronically and calling of information relating to the inspection via a web-based platform.

XII. COMPLIANCES UNDER THE CODE

Every employer will need to comply with the following:

*The notice to contain category-wise wage rates of employees, wage period, day or date and time of payment of wages and the name and address of the Inspector-cum-Facilitator of the jurisdiction.

The Code specifies the following penalties for offences committed by the employer, such as (i) paying less than the due wages; or (ii) contravening any provision of the Code. Penalties vary depending on the nature of the offence, with the maximum penalty being imprisonment for 3 months along with a fine of up to INR 1,00,000. The compensation payable for any default in payment of wages, minimum wages, bonus, etc. could be up to 10 times the claim amount as may be determined by the relevant authority.

In case of a subsequent offence, within 5 years from the first offence, the penalty will be imprisonment for 1 month or a fine up to INR 40,000 or both. If the offence is committed by a company, then every person who at the time of the commission of the offence was the in-charge and responsible for the conduct of the company, will be responsible and deemed to be guilty.

ARTICLE TAGS
India Employment and HR Employee Benefits & Compensation
POPULAR ARTICLES ON: Employment and HR from India
Employment Law Alert - October 2022
Singhania & Partners LLP, Solicitors and Advocates
We at Singhania and Partners, have always strived to keep our readers up to date on the current legal situation across the country, as well as the most recent updates that you should not miss.
EPS 2014 Amendment Constitutional, But Cut-Off And Higher Contribution By Employee Not Palatable: Supreme Court
Khaitan & Co LLP
In its much-awaited ruling in the case of Employees' Provident Fund Organisation (EPFO) and Another v Sunil Kumar and Others, the Supreme Court of India (SC) has upheld the constitutional...
The Supreme Court's Opinion On The Employees' Pension (Amendment) Scheme, 2014
Obhan & Associates
The Government of India is empowered by Section 6A of the Employees' Provident Funds and Miscellaneous Provisions Act, 1952 ("Act"), to frame a scheme...
FAQ On POSH ACT, 2013 – Part I
Khurana and Khurana
This is Part 1 of the 3 Part series blog which will cover some Frequently Asked Questions relating to the basic concepts of Sexual Harassment, its historical background, need, scope, objective of POSH Act 2013...
India's New Labour Codes- By Far The Biggest Change To Labour Laws In Indian History?
Alaya Legal
In India, several legislations have been enacted to promote the condition of labour. There are 44 labour-related statutes promulgated by the Central Government, of which 29 legislations...
Kerala Maternity Leave Update: Maternity Leave For Women Officers Being Contractual Employees
Agama Law Associates
The Maternity Benefit Act, 1961 should ideally cover within its ambit women who are employed on a contractual basis.
FREE News Alerts
Sign Up for our free News Alerts - All the latest articles on your chosen topics condensed into a free bi-weekly email.
Register For News Alerts
Article Tags
India Employment and HR Employee Benefits & Compensation
Related Articles
Code On Occupational Safety, Health And Working Conditions, 2020 Spice Route Legal
Code On Social Security, 2020 Spice Route Legal
Update: Notification Under The Karnataka Shops & Commercial Establishments Act Agama Law Associates
Amendment Of The Inter-state Migrant Workmen (Regulation Of Employment & Conditions Of Service) (Gujarat) Rules, 1981 Agama Law Associates
FAQ On POSH ACT, 2013 – Part I Khurana and Khurana
Mondaq Webinars
The New Swiss Data Protection Act - What You Need To Know
FABIAN PRIVACY LEGAL GmbH
Navigating the AI Legal Landscape
INQ Law
More Webinars
Comparative Guides
Alternative Investment Funds
Artificial Intelligence
Aviation Finance
Aviation Regulation
Blockchain
More Guides
Mondaq Advice Centres
India
Trademarks
India
Arbitration, Litigation and Conciliation
India
Insolvency
Global
Trademarks in SAARC Countries
More MACs
Upcoming Events
Mondaq Social Media