Germany: Disambiguation Of Text With An Upper And Lower Case: Technical

by Preston Richard
Bardehle Pagenberg
Your LinkedIn Connections
with the authors

This decision concerns a patent application with an improved text case feature. In the appeal, the Board considered that the software to remove the ambiguity of text with an upper and lower case was technical and inventive. Here are the practical takeaways from the decision  T 0200/19 (Disambiguation of text with upper and lower case/BlackBerry) of 30.4.2021, of Technical Board of Appeal 3.5.05:

To enhance the efficiency of disambiguation of a user input provided via a reduced keyboard of a handheld device is technical.

The European patent application relates to a handheld electronic device includes a reduced QWERTY keyboard having software to avoid text disambiguation. Disambiguation is a process of identifying which meaning of a word is used in context.

A reduced keyboard may have keys sharing multiple alphabets. In such a case, there may be instances where the input text is not correctly identified, especially with capital letters. For instance, if the user intends to type the word "BlackBerry" (the company) instead of "blackberry" (the fruit), in the reduced keyboard of the invention, the user can type the sequence of keys "BN", "L", "AS", CV", "JK" and "BN", wherein only one of the "BN" entries is entered as upper case. Based on the sequence of keys and the uppercase typed, the options may be either "blackb" or "Blackb" or "blackB".

The invention in the present patent application determines, based on the input, that the user intended to type "BlackBerry" instead of "blackberry", as it is a relatively more preferred variant based on the uppercase prefix that was entered. This avoids the need to press different keys more times in order to obtain upper case letters in a reduced keyboard, for the intended word. 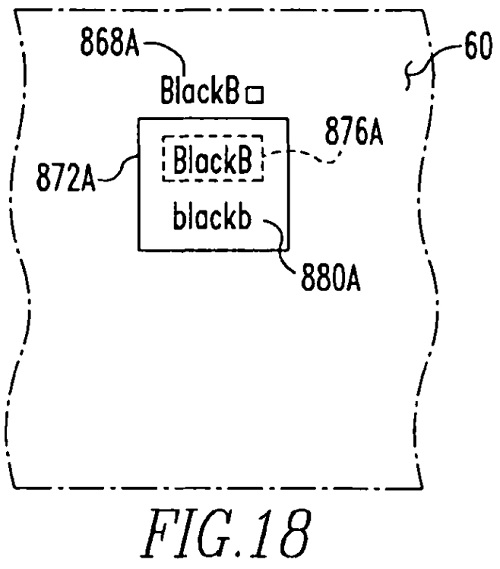 generating a plurality of prefix objects, each prefix object comprising a permutation of linguistic characters corresponding with the ambiguous input;

outputting as a relatively more preferred variant, in a predetermined quantity of alternative proposed interpretations of the ambiguous input, the first prefix object in accordance with the one of the first case makeup and the second case makeup; and

outputting as a relatively less preferred variant the first prefix object in accordance with the other of the first case makeup and the second case makeup.

The Examining Division considered that the claims lacked inventive step over cited document D1 (US 6 286 064), which also relates to the avoid disambiguation on a reduced keyboard. The Board summarised the cited document as follows:

2.1 D1 was considered the closest prior art in the impugned decision. D1 discloses a method for disambiguating an input sequence on a reduced keyboard device. A list of candidate words is presented to a user as a result of the disambiguation of an input sequence of keys. The candidate words are ranked according to their frequency of use in the vocabulary to help the user select the desired input. D1 further discloses in column 16, lines 46 to 51, that words with one or more capital letters may be stored in the vocabulary database and associated with keystroke sequences which omit keystrokes indicating capitals, eliminating the need for the user to enter the capital letters. This means that a sequence of input letters in lower case only may lead to a candidate word having upper and lower case letters.

Thereafter, the distinguishing features were identified by the Board as:

2.2 The subject-matter of claim 1 differs in substance from the disclosure of D1 by the following features:

- for an input sequence having a case makeup, at least two candidate words having the same sequence of letters but different makeup cases are retrieved from the vocabulary and presented to the user in the disambiguation list

In the preliminary opinion, the Board agreed with the Examination Division and opined was that the subject-matter indeed lacked inventive step. In particular, starting from D1, a solution for multiple case makeup would result in a straightforward choice of ranking candidate words in a sequence.

However, during the Oral Proceeding, the applicant successfully argued that the problem was incorrectly formulated, and the skilled person will have no motivation to the present solution of the invention:

2.3 The objective technical problem was formulated in the decision as how to enhance a disambiguation process where multiple case makeups exist. However, since D1 does not disclose any disambiguation between words having the same linguistic characters but different case makeups, the board agrees with the appellant that the objective technical problem should not contain the expression "where multiple case makeups exists" and be formulated as how to enhance the efficiency of disambiguation of a user input provided via a reduced keyboard of a handheld device.

D1, in particular with reference to column 16, lines 27 to 51, quoted in the impugned decision, only teaches automatic capitalisation correction of an input sequence provided in lower case and determined to correspond to a word that should always contain at least one upper case letter. D1 is not concerned with disambiguation of words having the same letters but different case makeups. Thus, the board agrees with the appellant that D1 would not have provided any suggestion or motivation for the skilled person facing the objective technical problem to modify the solution disclosed in D1 in such a way as to arrive at the claimed solution.

Although document D1 also disclosed that the system learned and stored different versions, the Board noted that this does not prompt the skilled person to the specific class of words:

2.4 Moreover, even if the skilled person would have considered that the system of D1 might learn and store versions of words that could present different case makeups in its vocabulary, like "blackberry" and "BIackBerry" or "asics" and "ASICS", the board agrees with the appellant that the skilled person would not have been prompted, either by D1 or their common general knowledge, to modify the disambiguation process of D1 to arrive at the disambiguation method for the specific class of words presenting different case makeups defined in claim 1.

Starting with D1, the Board noted that the skilled person is presented with numerous modifications to present words with the same sequence but different case makeups. The intended word may not be ranked first on the list, thus will not leading to the same result as the present invention:

In this respect, D1 discloses that words resulting from the disambiguation process are presented to the user in order of decreasing frequency of use. The skilled person would have considered numerous modifications that could be made to D1 to present words having the same letter sequence but different case makeups in the disambiguation list. The impugned decision mentions an approach consisting in ranking first the candidate which matches the case input of the user as closely as possible, namely at the level of the case of each character in the input sequence. However, in this case, if the user types an input sequence for an intended word comprising several upper case letters, such as BlackBerry or ASICS, omitting to type all the required upper cases for the input sequence except one, the intended word would not be ranked first in the disambiguation list since the case makeup of the word without upper case letters, such as blackberry and asics in the aforementioned examples, would most resemble the case makeup of the input sequence. Therefore, the approach suggested in the decision does not lead to the same result as claim 1.

Finally, the Board was convinced that the advantage of the user's wish to write the specific word is plausibly achieved by the claimed invention, to the extent that the user can rely on intentionally omitting the upper case. This resulted in the advantage of the reduced need to press different keys:

Therefore, the subject-matter was considered inventive, and the case remitted to the first instance with an order to grant the patent based on the claims of the main request.