Differences in wages for the same work happen more often to this day than we think, although by law, men and women must be paid the same salary if they hold the same position and have equivalent work experience.

November 13th, 2022 was Equal Pay Day. This day, however, is not one that marks the equality in wages between men and women. Quite the opposite in fact, Equal Pay Day marks one big issue: women effectively work 'for free' the remaining days of the year.

Despite all the attention the pay gap has not resulted in companies reducing the difference in pay for their employees. In 2020 women still earned Euro 5.00 less per hour than their male colleagues. A difference of 19%.

It is of great importance to close this gap of wage differences and it is crucial to know how to do this legally and where to start as an employer.

Do not make Wehkamp's mistake!

Beginning of November 2022 the news regarding the online warehouse Wehkamp paying its female in-house lawyer Euro 1,000 less per month than her newly employed male colleague made the headlines and pay gap was the talk of the day.

Summary: The woman in question has been working as an in-house lawyer for Wehkamp since 2019. A few years later her younger colleague was hired. A man with less legal experience than her. When she heard that a male colleague, who joined the company just a few months ago, was earning thousand euros more per month for the same work, she immediately addressed this to her supervisor. For her to only get an appointment months after she addressed the issue.

The company said that the reasoning behind the difference in pay was that the male employee had more job experience and therefore deserved more money. Even though the woman had been working there for four years, before they employed him.

After several conversations, Wehkamp promised that the woman would receive the same salary as her male colleague from January 2021 on. Just before this finally happened, a manager at Wehkamp informed the woman that there were sudden doubts about her functioning as an in-house lawyer. Whereas the company was previously always satisfied with the performance of the woman, they informed her that her contract might not be renewed because she was not performing well and her attitude was not good.

The gender pay gap (GPG) is the difference in average gross hourly earnings between women and men. It is based on salaries paid directly to employees before income tax and social security contributions are deducted.

As only companies of ten or more employees are considered in the survey these percentages are possibly even higher. 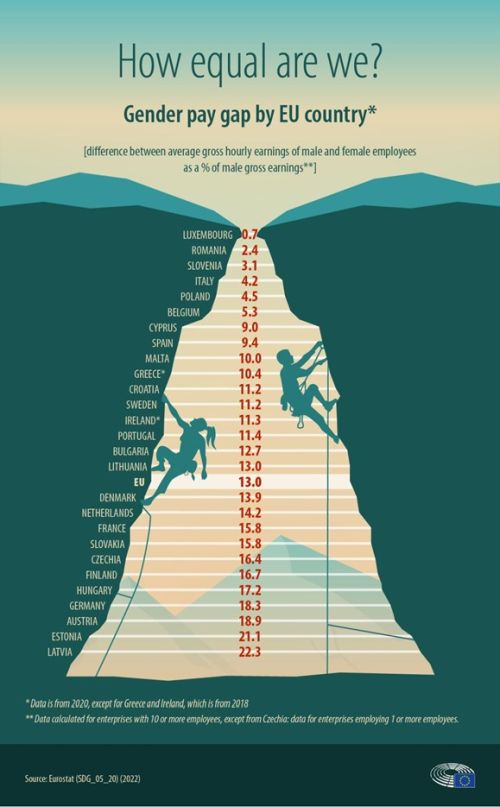 You are probably thinking: Surely this is not allowed in today's times, how is this possible! Wasn't the right to equal pay for men and women introduced in the Netherlands in 1975? And is sexism not something we left in the twentieth century and not something that we still tolerate in 2022?

It was, and progress has certainly been made, but we are far from complete equality yet.

Although the principle of 'equal pay for equal work' was introduced in 1957 with the Treaty of Rome, the so-called 'pay gap' persists in practice, with only minor improvements over the past ten years. The fact is that Wehrkamp is not even the only company to do this in the Netherlands and Europe and worldwide. There is still no equal pay in the Netherlands - nor in other (European) countries.

Flex-workers have a better position

CBS (Statistics Netherlands) has for the first time checked whether the type of employment contract makes a difference for the pay gap.

The results are overwhelming: women with a fixed employment contract for indefinite period are worse of than women with a flex contract.

The impact is even more noticeable when this is translated into income: during her working life a woman can earn as much as Euro 300,000 less than her male colleague!

Even though the earnings are determined on the basis of various factors, e.g. the branch, the function and even the education level, still the difference in pay is seen through out. When men and women in the same age-group, with the same education level and work experience are compared, the pay gap amounts to 6%. CBS cannot explain whether the remaining percentage of the pay gap is a result of pay-discrimination.

To make it easier to enforce the equal pay principle, 'pay transparency' should start offering a solution.

In the Netherlands, the Gender Pay Equality Bill was submitted on March 7th, 2019. Once the bill is passed, it should ensure an end to unequal pay between men and women.

This means that companies with more than 50 employees will have a duty to disclose the pay gap between women and men in comparable positions to the works council and in the management report. There should be a certification system, making it mandatory to provide figures on employee pay every three years. Companies with more than 250 employees must obtain a certificate showing that they pay women and men equally. If there is unequal pay, the employer will be given a chance to improve the situation. Failure to do so will result in fines following initiative bill.

Continued consideration of this proposal will take place in the House of Representatives (Tweede Kamer) on 15 November 2022. After more than 2.5 years since its submission, the initiative bill has not yet been passed by the House of Representatives. Consequently, women will have to wait a long time for its introduction.The European Parliament has also embraced pay transparency by voting to enter into negotiations with EU governments on the European Commission's proposal for a Pay Transparency Directive (Proposal for a DIRECTIVE OF THE EUROPEAN PARLIAMENT AND OF THE COUNCIL to strengthen the application of the principle of equal pay for equal work or work of equal value between men and women through pay transparency and enforcement mechanisms) in April 2022.

Not only are the benefits of closing the pay gap beneficial for women, but also for reducing poverty and stimulating the economy as women would be able to spend more.

"Assessments show that reducing the gender pay gap by one percentage point would increase the gross domestic product by 0.1%."

With this the Netherlands and the European Commission are trying to reduce the inequality in corporate world. This of course does not mean to sit back and do nothing, because, like we saw earlier, a lot of companies still don't stick to these rules.

As an employer you should not let this happen. It is the employer's job to look out for this. Employers should not discriminate in pay between men and women. It is best to be transparent and take action now.

Wehkamp-case is another wake-up call for employers

The employers need to follow the law and make sure they reward their employees equally.

However, should it still come to litigation, the burden of proof is entirely on the employer as the 'discriminated party' has the law on their side. The employer must, therefore, provide evidence that it has acted properly and convince the judge that there is indeed a good reason for the wage difference.

This does not only apply to new staff. All employees should be paid correctly. Even though the difference in salary might have made sense in previous years e.g. due to lack of experience of a certain employee, the salary should represent the current situation and employee's development within the company.

Pay transparency is the solution in preventing claims.

How to achieve transparency:

It is clear that employers cannot give the same wage to everyone. There goes a lot of work into determining someone's worth. It takes a lot of effort to take into account different wages and everyone's different situations and to organize it all to a fair amount of money.

As an employer you may have good grounds to reward someone with less work experience even if they have to do the same work, but this needs to have a good justification. This requires labour transparency and that is difficult.

It can seem overwhelming and often employers do not know exactly where and how to start. These kinds of issues can cause problems and create a tense working atmosphere. ACG International can help employers to achieve transparency.

ACG International is specialized and experienced in assisting companies preparing these kinds of divisions of labour. It is important for both employers and employees that these issues are and remain properly managed.

ACG International's managing partner, Edith Nordmann, has an expert qualification in labour law. She has been working as a lawyer in the field for over twenty years and can offer practical and strategic advice about employment contracts as well as help you maximize the transparency you have been searching for.

If you want to learn more about labour transparency and labour divisions, or how to really start reducing inequality in an efficient way on the business floor you are at the right place. ACG International offers free "labour-transparency-check" strategy sessions to help employers assess what needs to be done to achieve labour transparency.

ARTICLE TAGS
Netherlands Employment and HR Contract of Employment Employee Benefits & Compensation
POPULAR ARTICLES ON: Employment and HR from Netherlands
Changes In Labor Law In Poland In 2023, Incl. Remote Work
Dudkowiak Kopec & Putyra
The new year will bring a number of significant changes to the Labor Law in Poland. At the beginning of the year, in the Polish Labor Code new regulations will appear with regards to:
Can I Monitor My Employees And Workers?
Herrington Carmichael
The data protection laws in the UK are currently governed by the Data Protection Act 2018 (DPA 2018) and the UK General Data Protection Regulation (UK GDPR).
The Future Of Flexible Working — What Do Employers Need To Know?
Weightmans
The Government has recently issued its response to a consultation which contained proposals to reform flexible working regulations. In its response, the Government has committed...
Cultural Attitudes To Whistleblowing: Poland
lus Laboris
Attitudes to whistleblowing in Poland are shaped by a fear of ‘snitching' on colleagues, and a perception that employees and employers are not on the same ‘side'.
Royally Blowing The Whistle: Lessons To Be Learnt For Whistleblowers In The Workplace
Withers LLP
As a Brit married to an American and being dual qualified in England and New York, I speak daily with friends, family and clients on each side of the Atlantic. It is fair to say that Harry and Meghan - and events of late - quickly divide opinion.
‘Without Prejudice' Protection May Apply To Exit Discussions In Response To A Grievance
Herbert Smith Freehills
The EAT ruling in Garrod v Riverstone Management Ltd provides welcome reassurance that an employer can initiate ‘without prejudice' discussions offering a ...
FREE News Alerts
Sign Up for our free News Alerts - All the latest articles on your chosen topics condensed into a free bi-weekly email.
Register For News Alerts
Article Tags
Netherlands Employment and HR Contract of Employment Employee Benefits & Compensation
Related Articles
You Are Fired! ACG International
The Minimum Wage As Of 1 January 2023 In The Netherlands Nazali
A Negative Attitude At Work: Grounds For Termination? lus Laboris
The Works Council Under Dutch Law (Podcast) Littler Mendelson
Does A New Dutch Law Let Employees ‘work Where You Want'? lus Laboris
Mondaq Webinars
Considering the Nigerian Start-Up Act & The Opportunities for Tech
Oake Legal
A Guide for Business and Investors – The Sleeping Giant; Why is Nigeria the New Emerging Market for Global Business
Threshing Fields Law Practice
More Webinars
Comparative Guides
FinTech
Labour and Employment
More Guides
Mondaq Advice Centres
Global
Trademarks in SAARC Countries
More MACs
Upcoming Events
Mondaq Social Media