For many years, the China Trademark Office (CTMO) has not accepted "retail" services in Class 35, on the basis that the protection of services implies providing a service for others, rather than the sale of a brand owner's own goods.

In recent years, there has been a degree of relaxation of this practice – especially when retail services in Class 35 are filed through the International System or when such services relate to medical, pharmaceutical or veterinary products.

The Chinese courts are recognising that the exclusion of retail services from trade mark registration is commercially difficult and some decisions are determining confusion, although the position remains unpredictable. In Shenzhen Milan Station Trading Co v Milan Station (Hong Kong) Holdings Limited: the court held that "retail services" fell within the scope of "sales promotions (for others)", and similar reasoning was used to determine that retail supermarket services were similar to "sales promotions (for others)" (TingChao (Cayman Islands (Holdings) Co. Ltd v Min Fen.).

Fendi have experienced the unpredictability of the Chinese courts without protection for "retail services" in a long-drawn-out battle with a parallel importer, Shanghai Yi Lang International Co. Ltd ("Yi Lang"). Yi Lang operated a Fendi outlet store using parallel imported Fendi goods from France and used the "FENDI" trade marks on the signboard as well as on shopping bags, advertising brochures and their official WeChat account. 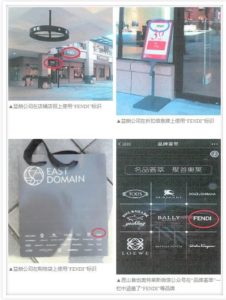 At first instance, at a local district-level court, it was held that there was no infringement, although this was reversed at second instance by the Shanghai Intellectual Property Court, who ordered Yi Lang to pay RMB350,000 to Fendi in compensation. Yi Lang requested that the case was sent to the Shanghai High Court for retrial and final determination.

Yi Lang was ordered to immediately cease their infringing use and pay compensation to Fendi.

The decision is good news for brand owners and does show the shift in the practice in China towards the generally accepted practice adopted internationally and the more commercial requirements of brand owners. In addition, we can hope that the decision from the Shanghai High Court will be used in other pending cases in numerous courts and will result in more consistent decisions in the future.

The decision also suggests that a Class 35 registration, even if there is no mention of retail services, is a useful tool in assisting in cases of trade mark infringement in China.

Careful consideration needs to be given the scope of services in Class 35 applications in China, and it is good practice to include other services in Class 35 such as "provision of an on-line marketplace for buyers and sellers of goods and services", "marketing" and "sales promotion for others".

If seeking protection through the International system, the term "the bringing together, for the benefit of others, of a variety of goods (excluding the transport thereof)" has also been accepted by the CTMO.

It can also be useful to consider other routes, such as:

ARTICLE TAGS
China Intellectual Property Trademark
POPULAR ARTICLES ON: Intellectual Property from China
Patent Law in India
Anand & Anand
The Patents Act 1970, along with the Patents Rules 1972, came into force on 20th April 1972, replacing the Indian Patents and Designs Act 1911. The Patents Act was largely based on the recommendations of the Ayyangar Committee Report headed by Justice N. Rajagopala Ayyangar. One of the recommendations was the allowance of only process patents with regard to inventions relating to drugs, medicines, food and chemicals.
Difference Between Passing Off And Infringement Of The Trade Mark
Khurana and Khurana
A Trade mark may be defined as a lawfully protected abstract, word, symbol, color, mark, slogan or a mixture of those related to an organization or a selected product that differentiates it from the others accessible within the market.
All You Need To Know About "Well-Known Trademarks"
Khurana and Khurana
With coming up of the new Trade Mark Rules 2017, a new procedure has been created that allows the Registrar to proclaim a particular trademark as "well known".
Process: Trademark Registration In India
Intepat IP Services Pvt Ltd
Many entrepreneurs do not comprehend the importance of a TM search.
Concept Of Fair Use And Fair Dealing In Copyright
S&A Law Offices
Fair use supports "socially laudable purposes," typically, if not exclusively, involving the use of the copyrighted work by a second author
Does AI Qualify As An ‘Inventor' Based The Statute In Indian Patents Act, 1970?
InvnTree Intellectual Property Services Pvt. Ltd.
In a first, the Indian Patent Office has objected to recognizing AI as an inventor in a recent application numbered 202017019068 citing the provisions laid in Section 2 and Section 6 of The Indian Patents Act, 1970.
FREE News Alerts
Sign Up for our free News Alerts - All the latest articles on your chosen topics condensed into a free bi-weekly email.
Register For News Alerts
Article Tags
China Intellectual Property Trademark
Related Articles
这种行政阶段的维权方式，比驰名商标还厉害！ Kangxin
The Importance Of Evidence Collection In Trademark Administrative Litigation Kangxin
制药企业驰名商标保护相关问题-兼评"赛诺菲""SANOFI"驰名商标行政诉讼案件 Rouse
不同申请主体和申请方式下的保密审查规则 Kangxin
Beijing IP Court Issues "Reference For Case Filing In Civil Cases Involving Patent Disputes Related To Drugs Of Which Applications For Registration Are Filed (Trial Implementation)" And The Interpretation Of The Same Kangxin
Mondaq Webinars
Latest Updates in the Turkish M&A Landscape and Looking Ahead to 2022
Solak & Partners
Webinar Istanbul Turkey
Diverse Liquidity Options for Complex Cayman Islands Fund Structures
Travers Thorp Alberga
Webinar Grand Cayman Cayman Islands
More Webinars
Comparative Guides
Cartels
Franchising
International Arbitration
Merger Control
Trademarks
More Guides
Mondaq Advice Centres
Global
Trademarks in SAARC Countries
More MACs