by
Stites & Harbison PLLC
0 Liked this Article
To print this article, all you need is to be registered or login on Mondaq.com.

The Right Stuff (1983) is a movie that's begun to be fully appreciated only recently.

One of its best scenes is when the iconic test pilot Chuck Yeager (played by Sam Shepard) takes a very dangerous flight in an NF-104 Starfighter in December 1963, attempting to break the world altitude record.

At the edge of space above the high desert, Yeager goes "up, up the long delirious burning blue." At the top of his parabola, the tanks run dry, the engines flame out, and the aircraft goes into a flat spin. The look on Yeager's face as he slows to a stop at the peak of the arc is telling: he knows he's going to have a problem really soon.

Even if you aren't a test pilot, you, too, are very likely to hit the top of your income growth trajectory well before your career makes a landing and you leave the work force.

Understanding when your income will peak is really important to making effective choices about consumption, savings, and lifestyle — choices that will carry through to your estate planning, too.

Likewise, advisors will do better work for clients if they understand where a client's income statement is positioned in that client's career.

What does the best available data suggest for your income trajectory? If you have a college degree, the news is quite good in your 20s, good in your 30s, and mediocre by your mid 40s.

The clip below from a chart created by Payscale.com from their data shows that income growth for college graduates tends to hit the top of the arc for women by age 39, and for men by age 48. 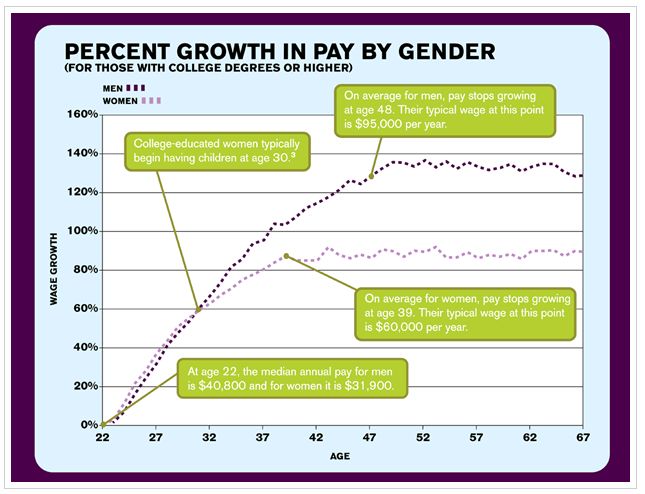 The Payscale.com research was presented and discussed well by Kimberly Palmer in U.S. News & World Report.

Responding the same Payscale data, Penelope Trunk offered suggestions for beating the odds of income stagnation in your 40s and afterwards (or, alternatively, embracing the trend and seeking lifestyle optimization instead).

Data from the Bureau of Labor Statistics available for 2010 and 2012 parallels the Payscale research: income growth plateaus by the mid-40s and from that point, average incomes rise by negligible amounts by the time workers reach retirement age at 65.

Doug Short wrote a detailed, insightful piece on trends in median household incomes by age bracket between 1967 and 2013. 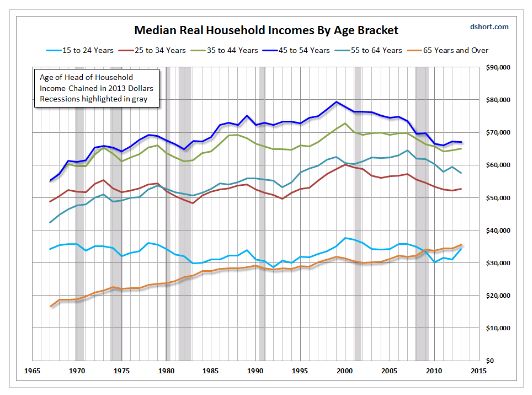 Short's chart shows the effect of the "lost decade" for the middle class after the bust of the dot-com bubble, and it also shows an earnings peak between age 45 and 54.

Economists from the Chicago Fed published a report in 2013 about the Great Recession's effect on consumers'  expectations of income growth.

Many of us felt that the 2007 recession was qualitatively different than others we had known, and that is borne out in the data. 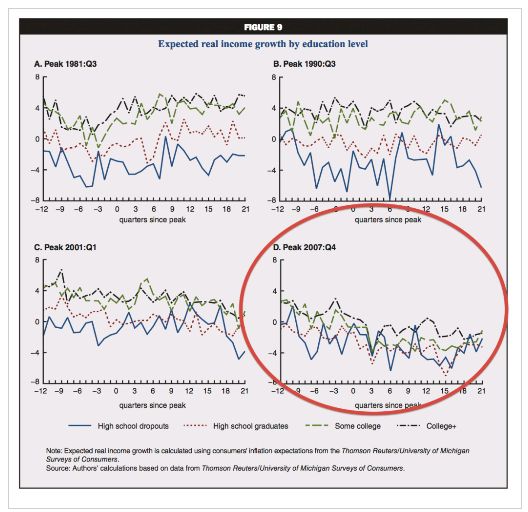 The circled chart from the Chicago Fed's report shows inflation-adjusted income growth expectations heading out of the 1981, 1990, 2001, and 2007 recessions.

You can see that expectations of growth after the Great Recession are lower, and that income growth expectations of college graduates are no longer very different than those of population cohorts with less education.

A race to the bottom? It isn't fun to think so, but that's what the expectations data suggests.

If you find yourself in a healthy industry, possessed of strong human capital, you may be able to beat these trends past age 40, but it may be wiser to anchor your planning in more modest assumptions.

For advisors, this data suggests that tailoring modeling assumptions about income growth to each client's specific career context and phase will produce more accurate, useful results.

Yeager survived his fall from the edge of space and is now posting the occasional tweet at age 91. You can plan to thrive for decades like he has – but do yourself a favor and plan a realistic income growth trajectory.