Protecting designs in their jewellery is an uphill battle for jewellers under US jurisprudence. The most common avenues for protection lie in the laws of copyright and trade mark; however, each have limitations and hurdles and often leave designers without a sure means of enforcing their rights. This article explores the circumstances under which jewellery may qualify for protection under US copyright and trade mark laws and discusses the shortcomings associated with each.

Copyright holders of jewellery design own a bundle of exclusive rights in their work, including rights of reproduction, distribution and the right to create derivative works based on the copyrighted work. To qualify for copyright protection, a piece of jewellery must be an author's original expression and possess a minimum level of creativity. While the Copyright Act of 1976 affords copyright protection to a work the moment it is created (provided it is original and has been fixed in a tangible medium of expression), formally registering a work with the Copyright Office has many advantages. For one, copyright registration creates a public record of the work's validity and provides key facts about the work, such as the year of creation, the title and the author or owner of the copyright. In most federal courts, registration is a prerequisite for filing a lawsuit for copyright infringement.

To obtain registration, the Copyright Office requires a showing of originality as laid out in the Copyright Act and the 1991 Supreme Court decision Feist Publications v Rural Telephone Service. In Feist, the Court held that the Copyright Act implies that some ways of selecting or arranging uncopyrightable material will trigger copyright, but others will not.

In the opinion of the Copyright Review Board, some combinations of common or standard design elements may be sufficiently creative in how they are juxtaposed or arranged to support a copyright. However, not every combination or arrangement meets this test. In the context of jewellery design, it appears that the more complicated the design, meaning the more elements contained in the overall work, the more likely the Copyright Office will register the work. Whether elements are "complicated" enough to warrant originality, however, seems to be an increasingly subjective standard.

Furthermore, originality is difficult to establish when the design is based on elements that occur in nature, such as a flower or four-leaf clover. Jewellery designs featuring mere variations of common or standardised designs (e.g. solitaire rings, simple diamond stud earrings, plain bangle bracelets, simple hoop earrings, among other commonly used designs, settings, and gemstone cuts), familiar symbols, and obvious combinations or arrangements of commonplace designs will not be registered.

While the Copyright Office provides examples of standardised designs, familiar symbols and commonplace elements that are not eligible for registration, these contemporary guidelines often clash with designs that were afforded registration by the Office directly after the enactment of the Copyright Act of 1976.

Examples of jewellery designs that received copyright protection from the Copyright Office are not readily available without going through the arduous and expensive process of executing a formal search. As such, guidance on what is considered "original" in jewellery design is most easily ascertained through an examination of case law. 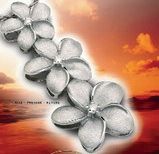 In Van Cleef & Arpels Logistics v Jewelry (Southern District of New York, 2008), the Copyright Office had granted Van Cleef 's application on January 7 1976. When another party challenged the originality of the copyright registration, the court held that Van Cleef 's rendition of a military clover insignia, used by the 88th Infantry of the US Army, was copyrightable. Despite the commonness of the quatrefoil shape (i.e. a four-leaf clover) and the previous appearance of the image on Army-approved pins and sweetheart necklaces, the court held the arrangement of the elements was sufficiently original without much further explanation.

Since 2016, however, the Copyright Office has published numerous opinions denying applications for works that, despite being extremely similar to the applications mentioned above, it determined were not sufficiently "original". For instance, the Office denied Eli Eldad Niv's application to register his jewellery design in the works titled Plain Thorn Bracelet with Logo, Plain Thorn Ring with Logo, Pave Thorn Bracelet with Logo and Pave Thorn Ring with Logo. These works each consisted of variations of three braided strands of metal resembling thorny branches as shown below.

The Copyright Office found that the designs did not contain a sufficient amount of original and creative authorship to support copyright registration because they only featured one or two basic elements in a simple combination and the features were not combined in a way that differentiated them from their basic shape and design components.

On his second request for consideration, Niv argued that the works were a less natural interpretation of the thorny stem and therefore embodied sufficient creativity to support registration. Nevertheless, the second request was denied and copyright registration refused for lack of original copyrightable expression.

Comparing Niv's artistic expression of braided thorns to Van Cleef 's clover and Wong's Plumeria blossom, all three works are similar in that they are artistic or liberal expressions of elements or plants found in nature. That the validity of Van Cleef 's copyright registration (i.e. the originality of the work) was affirmed in 2008 by a federal court, rather than a Copyright Office examiner, underscores the assertion that the Copyright Office has raised its threshold of originality for registration of jewellery designs. That said, even when faced with such case law, the Copyright Office justifies its determinations of originality without much meaningful explanation.

For instance, when denying Niv's application, the Office held that the thorn bracelet was less original than the plumeria blossom in Cosmos because the work included "minute characteristics of the blossom petals, the arrangement of blossoms and other flourishes in different variations on the 'multi-blossom' [jewellery]." Beyond using vague language, such as "flourishes" and "minute characteristics," the Office gives no clear reasons why Wong's simple plumeria blossom, which closely resembles the same expression of the plumeria blossom found in nature, is any more original than Niv's complex braided thorny design with additional branches emanating from each braided link, something that does not readily occur in nature.

In short, it appears that the Copyright Office has raised the bar for originality, often leaving jewellery designers without protection. It is difficult to predict with much certainty the conditions under which the Office will deem a work to be sufficiently "original" as to warrant protection.

Trade mark rights in the context of jewellery generally involve a product's design, which is protected under the Lanham Act as unregistered "trade dress". The Supreme Court has held that when seeking protection for a product design, the owner must show evidence of "secondary meaning". When a product design has secondary meaning, it functions as a "single source identifier", meaning that when viewing the design, the consumer automatically recognises the shape or configuration of the product as originating from one source (or brand). For example, when consumers see Cartier's signature Love bracelet design, they automatically know it was made by Cartier. Factors considered in determining whether a product design has attained secondary meaning include: (1) advertising expenditures, (2) consumer studies linking the product design to the source (i.e. "purchaser perception"), (3) unsolicited media coverage of the design, (4) sales success and the number of customers, (5) attempts to plagiarise the product design, and (6) length of time and exclusivity of the use. Thus, while copyright often protects a jewellery design from the point of inception, trade mark can only protect jewellery design after it has been on the market for at least five years, the manufacturer or designer has spent a considerable amount of money advertising the product, the product has been made available to innumerable consumers because of its success, and several parties have attempted to infringe the design.

Parties claiming rights in trade dress must also offer a precise expression of the character and scope of the claimed trade dress for a court or jury to evaluate secondary meaning. For example, in Yurman Design v PAJ (Second Circuit, 2001), David Yurman sought to establish trade dress protection for an entire line of products that all featured its signature cable design. The court held that Yurman's explanation that "the artistic combination of cable [jewellery] with other elements" was overly broad and did not sufficiently articulate the specific common elements sought to be protected. As a result, while the court found Yurman's copyright in its signature cable braided design was sufficiently original, it held that Yurman failed to identify the elements and features that distinguish its trade dress.

Years later, when Yurman brought another trade dress infringement against a different defendant for similar designs in Yurman Design v Golden Treasure Imports (Southern District of New York, 2003), Yurman did not seek to establish trade dress protection over an entire line of jewellery without reference to specific elements, but rather set out all the various designs as embodied in particular pieces of jewellery, seeking to protect the trade dress of each piece individually. In response, the court held that its characterisation was sufficient and granted it protection.

These cases demonstrate that while one element of jewellery design may occur in multiple pieces from one source, owners seeking to establish trade dress protection would do best to articulate the protection sought in each individual design in a collection. They also illustrate that obtaining protection through trade dress is not an easy task for a jewellery designer, and it is often not achieved until significant marketplace penetration has occurred.

Where do jewellery designers go from here?

Copyright and trade dress may offer some protection for certain designs at different time periods. The Copyright Office seems to have increased the bar for demonstrating originality, making it harder for designers to prove. Trade dress may not be available until years after a product has been launched unless the design can be considered instantly famous (which can be shown where knock-offs abound - on the added condition that it is not functional).

Intellectual property practitioners were hopeful that the Supreme Court's decision last year in Star Athletica v Varsity Brands would provide specific guidance for what constitutes "originality" in the copyright context. Unfortunately, though the Court resolved the longstanding question of whether clothing design could be "functional" and thus barred from copyright, it declined to opine on the originality of the clothing in question: cheerleading uniforms featuring arrangements of chevrons, colour blocking, and braiding, among other basic elements. Thus, we are left to struggle with the vague "modicum of creativity" standard from Feist, which often promises more than the Copyright Office delivers.

Jewellery designers and manufacturers should bear these issues in mind when deciding whether and when to enforce their rights against an infringing party. Because the copyright application process is relatively simple, it often pays to seek registration. The downside, of course, is a public record that the particular design is not original and therefore cannot be used as a sword to stop others from copying. If a jewellery design is intricate and reflects grandiose designs, the chances are better that it will pass the Copyright Office's test for originality. On the other hand, jewellers who are known for simple, delicate works may have greater success in the trade dress realm. For now, these are the two best bets for protecting designs in jewellery.