What I'd like to write about is a series of stories that have been piling up on pretty important developments on various fronts touching on the efforts to re-regulate the legal profession and debates about whether and how to do that ... and all of those things would seem to be very important. But I'm not writing about that today because other things are going on that raise a much more immediate, potentially much more alarming, issue — is there even a viable future for legal ethics that means anything at all?

Yesterday, a number of alarming things happened rapidly to raise real questions about whether efforts to try to re-regulate the profession and tackle subjects like law firm ownership, fee-sharing, and payments for referral or other marketing arrangements to make legal services more affordable for middle-class consumers and possibly increase overall access to justice is just rearranging deck chairs on the Titanic.

The first thing you need to remember – in case it somehow slipped your mind — is that among the many people who have been convicted or plead guilty from within the President's campaign circle is a man named Roger Stone. Stone was convicted for lying to Congress about his contacts with the Trump campaign and with WikiLeaks and for obstructing the Congressional probe into Russian influence in the 2016 election and for witness tampering. Prior to yesterday's events, the federal prosecutors handling his case had filed paperwork with the court recommending that the appropriate sentence range for Stone would be between 7 and 9 years.

Then came yesterday. First, at about 1 a.m., the current occupant of The White House took to Twitter to complain that the sentencing recommendation made by the federal prosecutors handling the case against Roger Stone was too harsh. This was what he had to say: 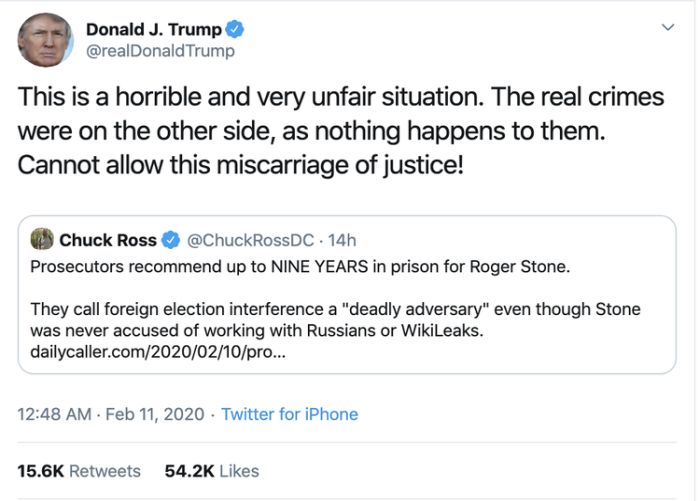 Later that morning, the Department of Justice announced that it will be making a new recommendation for a shorter, less-harsh sentence, effectively overriding what federal prosecutors had already communicated to the court and certainly seeming to be in reaction to the tweet.

Later in the day, the third President in U.S. history to be impeached publicly stated that he had every right to tell the Department of Justice what to do. You can go see that video here.

By the end of the day, all four federal prosecutors who were counsel of record for the United States in the Stone case had filed papers to withdraw from the representation and one of those four also resigned altogether from their position as an AUSA and another resigned his position as a Special Assistant Attorney in DC while intending to keep his job as an AUSA in Baltimore. Then the media reports came out to indicate that the Attorney General of the United States was now personally taking on all of the cases that mattered to the guy who is likely, if the United States Congress is paying attention, to become the 1st President in United States history to be impeached twice. In addition to intervening in the Stone matter, the article indicates sources are relaying that Barr also was behind the change in the approach to sentencing for Michael Flynn another of Trump's campaign comrades who pled guilty to lying to the FBI and is now, two years later, trying to withdraw his guilty plea.

I've written before about the fundamental problem under the ethics rules if not otherwise for the Attorney General of the United States to act as if he were the personal attorney for the President rather than the chief law enforcement officer of the United States. You can read that here.

But more importantly you can pretty quickly get up to speed on yesterday's very troubling developments here, here, and here. Or if you want to go straight to the source to confirm what is going on, you can read this from this morning: 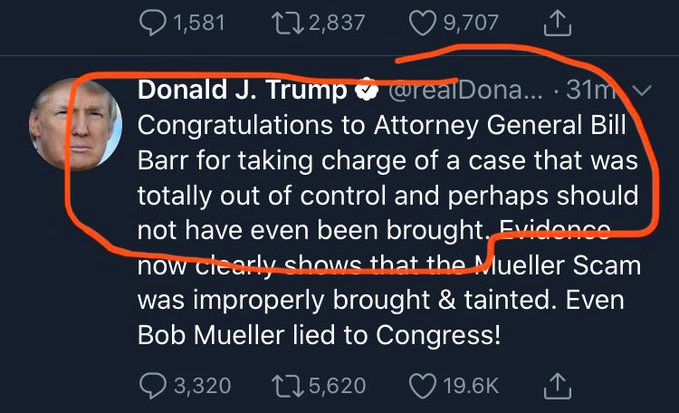 And, if you want some reference to the actual ethics rules to feel like this post somehow really counts as "on ethics," let's talk a bit about how the four AUSAs who are seeking to withdraw from the Stone case are – unlike their Attorney General — complying with their ethical obligations under the ethics rules.

Some state variations on RPC 1.13, including mine here in Tennessee (which admittedly has no bearing on any aspect of the Stone case) not only impose those requirements for reporting up the ladder in the organization but demand that "[i]f despite the lawyer's efforts in accordance with paragraph (b) the highest authority that can act on behalf of the organization insists upon or fails to address in a timely and appropriate manner an action, or a refusal to act, that is clearly a violation of law, and is likely to result in substantial injury to the organization, the lawyer may withdraw in accordance with RPC 1.16...."