by Katie McShane and Thomas Wilson
Cadwalader, Wickersham & Taft LLP
Your LinkedIn Connections
with the authors 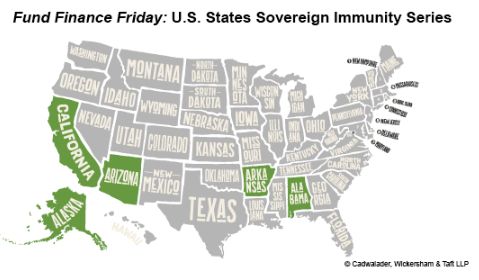 In this week's Fund Finance Friday, we release the first installment of our Sovereign Immunity Series, a new series in which we examine, in alphabetical order, the sovereign immunity status of each state. Today, we will provide a high-level overview of sovereign immunity in Alabama, Alaska, Arizona, Arkansas and California.

Sovereign immunity is a complex legal issue, and one that has been discussed at great length in previous Fund Finance Friday articles. See, for example, "Immunity Unlikely" by Wes Misson and "Declaration of Sovereign Immunity: Navigating Side Letter Provisions" by Chad Stackhouse and Ryan Gee.

By way of quick refresher, sovereign immunity refers to the proposition that the government cannot be sued without its consent, or in other words, "the King can do no wrong," which is a centuries-old, universally applicable doctrine codified in the Eleventh Amendment of the United States Constitution (which limits suits against states by private parties in federal court) and in a number of state constitutions. State legislatures and judges have, over the years, recognized the unjustness of this doctrine from a commercial point of view and, as a result, made various exceptions, which differ from state to state.

Public pension funds are increasingly investing in the private equity world. See Chris Montgomery's "The Rise and Rise of Public Pensions in Private Equity," which discusses this in further detail. In fund finance, it is very common for government investors such as state pension funds to reserve their sovereign immunity in a side letter; however, regardless of such reservation, applicable law will determine whether the public entity is immune from suit. It's therefore crucial for lenders to understand the applicability of state law as it relates to the potential enforcement against a government investor for failure to fund its capital commitment. Express or implied waivers or equitable theories may also be relied on in an enforcement situation; however, for the purposes of this article, we will provide an overview of the legislative exceptions that arise in each state.

Before getting started, it is important to stress that the sovereign immunity status of a government investor should be analyzed on a case-by-case basis. Nuances in local law and the related transaction will affect this determination, and it is wise for lenders to consult counsel on the matter.

Alabama is one of the minority of states that has not waived its contractual sovereign immunity. Article 1, § 14 of the Alabama Constitution even specifically states that "the State of Alabama shall never be made a defendant in any court of law or equity." Alabama does, however, provide for an administrative mechanism by which claims may be made. Such administrative mechanism is through the Board of Adjustment, which is an independent, quasi-judicial agency that has the power to hear all claims against the state of Alabama or any of its agencies, commissions, boards, institutions or departments. This would undoubtedly pick up a claim against a state pension fund for failure to fund its capital commitment pursuant to the related fund documentation. All claims are required to be presented to the Board of Adjustment within one year after the cause of action accrues, and the Board has authority to ascertain the facts in the case, determine the amount of the injury and fix the damages.

Alaska has waived its contractual sovereign immunity through statute. Pursuant to Article II, § 21 of Alaska's Constitution, the state specifically delegated the authority to control immunity to the legislature, which subsequently passed a law waiving the state's immunity to suits asserting contract claims against it. Certain exceptions to the waiver of sovereign immunity apply (such as misrepresentation and deceit); however, none of these exceptions appear to exclude a breach of contract claim by a state investor.

Arizona has waived its contractual sovereign immunity. The Arizona Constitution grants the legislature the authority to decide "in what manner and in what courts suits may be brought against the state." As a result, Arizona lawmakers have authorized contract claims against public entities. The relevant statute provides that persons who have claims against a public entity must file claims within 180 days after the cause of action accrues. A cause of action accrues when the damaged party realizes that it has been damaged and knows or reasonably should know the source that caused or contributed to such damage. Persons filing claims against a public entity must provide the facts sufficient to permit the public entity to understand the basis on which liability is claimed, as well as a specific amount for which the claim can be settled.

Similar to Alabama, Arkansas has not waived its contractual sovereign immunity. Article 5, § 20 of the Arkansas Constitution provides that "The State of Arkansas shall never be made defendant in any of her courts." This has also been upheld by various case law. However, as with Alabama, Arkansas does allow for an alternative mechanism to assert a claim against the state. Claims against the state are to be heard by the Arkansas State Claims Commission, which generally has exclusive jurisdiction over claims against the State of Arkansas and its several agencies, departments, and institutions. All proceedings against the state or its agencies must be filed with the Director of the Arkansas State Claims Commission, with a copy of the contract attached and within the period allowed by law for the commencement of an action for the enforcement of the same type of claim against a private person. Such time period is three years for any action founded upon a contract by a private party. Interestingly, a constitutional amendment was introduced to the Arkansas legislature last year in an attempt to, in certain circumstances, waive state sovereign immunity. While the bill stalled in committee, legislative reform may be on the horizon.

California has waived its contractual sovereign immunity. Therefore, a plaintiff may proceed against the state government just as if it were proceeding against a private citizen in this context. California does, however, have an archaic 1937 statute, the County Employee's Retirement Law, that applies to county pension plans, many of which are frequent private equity investors. This legislation covers all California counties, and it protects California county pension investors from monetary judgments. A plain reading of the statute has only three exceptions permitting enforcing a judgment against the pension. Unfortunately, subscription credit facilities do not fall within any of these exceptions, as these were clearly never contemplated in 1937. Lenders in the marketplace have generally gotten comfortable with including California county pension investors in a borrowing base, although often times these investors are included at a discounted advance rate. This is because, if a California county investor failed to contribute capital when called, (1) the lenders could assert several equitable legal principles, such as unjust enrichment, and (2) there is a theory that it may be feasible to obtain a writ of mandamus against the investor to force it to fulfill its monetary obligations to fund capital.

Governmental investors must be evaluated on a case-by-case basis to ascertain if any sovereign immunity rights apply and, if so, whether such investor has effectively waived its immunity. Understanding the local law applicable to such investor is an important part of making this determination. In the next installment of our Sovereign Immunity Series, we will discuss the sovereign immunity status of Colorado, Connecticut, Delaware, Florida and Georgia.