In this post, we tackle the question of how to calculate the "gross notional amount" of a derivatives transaction for purposes of the limited derivatives user provision of Rule 18f-4. This is a surprisingly difficult question because, although the adopting release for Rule 18f-4 (the "Adopting Release") refers to "notional amount" 63 times, the release never directly addresses what the term means. We think we found an answer, but it required us to wind our way through a series of earlier SEC statements.

According to the Adopting Release, the SEC:

proposed a 10% derivatives exposure threshold based in part on staff analysis of funds' practices regarding derivatives use based on Form N–PORT filings."

Form N-PORT was first promulgated in October 2016. To assist in implementing the new form, the SEC staff issued FAQs in July 2017. Question 15 is: "Is there a prescribed calculation of notional amount that funds should follow?" The staff responded:

The Commission staff understands that funds currently use different methods for calculating notional amount of a derivatives investment. For example, the staff understands that some common methods used by funds for determining a derivative transaction's notional amount may include the methods listed in Table 1 on page 69 of the Derivatives Proposing Release."

The staff's response was hardly unequivocal, but this Table 1 would seem to provide examples of how a fund may calculate the gross notional amount of some derivatives transactions.

Anyone who reaches for the proposing release for the final version of Rule 18f-4, which was issued over two years after the FAQ, and flips to page 69 will not find any tables. This is because the FAQ is referring to the release that originally proposed Rule 18f-4 in December 2015. This means that the best guidance we have found for calculating gross notional amounts comes from a rule proposal that the SEC abandoned when it re-proposed Rule 18f-4 in late 2019.

Rather than force readers to click the link to the original release, we reproduce Table 1 below. 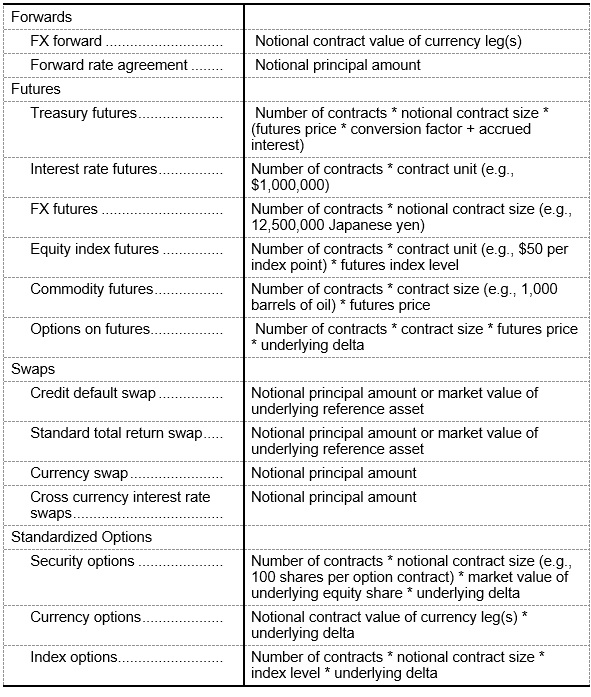 We have several concerns regarding this table. For example, it is incomplete (e.g., no mention of interest rate swaps other than cross currency ones, although our assumption is that these would be measured consistently with cross currency swaps and forward rate agreements). In addition, many of the notional amounts are not expressed in dollars, so the table does not completely answer the question of what price to use to calculate a notional dollar value. We have other reservations about using N-PORT notional amounts to calculate derivatives exposure that we will discuss in subsequent posts. But for now, this is the best guidance we could find.