The books are now closed on another decade of False Claims Act (FCA) enforcement, and what a decade it was. During the last ten years, the government recovered nearly $38 billion dollars under the FCA from companies that do business with the federal government. This ten-year total is more than double the amount recovered in the prior decade (2000 to 2009), and there are no signs of relief in sight.

This past year, as in preceding years, the government continued to rely on the FCA to combat alleged fraud and corruption by companies doing business with the government, and the Department of Justice (DOJ) obtained more than $3 billion in recoveries. This figure marks a slight uptick from 2018 and remains relatively consistent with recent recovery trends. The pipeline of new cases—which will drive recoveries in future years—also remains full. More than 780 new FCA matters were initiated in 2019, marking the tenth year in a row in which over 700 new FCA cases were filed.

In other news, while this year has seen no major legislative developments at the federal level, states continue to enact or amend false claims statutes that will enable states to receive a higher percentage share of any recoveries under such laws. Meanwhile, the courts continued to develop a body of law beneath the statutory text. During the last year, there were a number of noteworthy circuit court decisions that concern the scope of the statute's reach in relation to government programs, materiality, causation, and even DOJ's authority to seek dismissal of qui tam suits pursued by whistleblowers, among other important topics.

We address these and other developments in greater depth below. We first focus on enforcement activity during the fiscal year ending on September 30, 2019 and recent, noteworthy FCA settlements. Next, we turn to legislative and policy updates at the federal and state levels. Finally, we analyze significant case law developments.

As always, Gibson Dunn's recent publications on the FCA may be found on our website, including industry-specific articles, webcasts, presentations, and practical guidance to help companies avoid or limit liability under the FCA. And, of course, we would be happy to discuss these developments—and their implications for your business—with you.

The federal government recovered more than $3 billion during fiscal year 2019.1 This amount is a slight increase from last year ($2.9 billion), and marks the eleventh straight year that total FCA recoveries have been $2.45 billion or more.2 With the exception of 2012, 2014, and 2016, when DOJ hit high-water marks of $5 to $6 billion (driven in part by mortgage-related settlements resulting from the 2008 financial crisis), the modern era of FCA enforcement appears to have settled into a remarkable rhythm: every year, the federal government recovers somewhere in the neighborhood of $3 billion dollars using the FCA.

There are no signs of these staggering recovery amounts abating, and this trend has held regardless of the administration. Although the Trump Administration had overseen a slight downtick in the annual recoveries during each of the prior two years, this year's recoveries reversed the trend with an increase from last year.

These recoveries, while very high in their own right, do not even include all of the recoveries attributable to false claims activity, because the DOJ figures represent only federal recoveries, not state recoveries. Yet, in FCA cases there is very often a state component to any settlement or judgment, especially in health care cases where there is a nexus with state Medicaid programs. Indeed, DOJ touted in its press release announcing these figures that "in many of these cases the department was instrumental in recovering additional millions of dollars for state Medicaid programs."3

The total number of FCA cases filed each year remains remarkably high, too. This year, there were 782 new FCA cases. Of those, 146 (or 19%) were initiated by the government, while the other 636 (or 81%) were initiated by qui tam whistleblowers.4 This is consistent with past years, as demonstrated in the chart below. 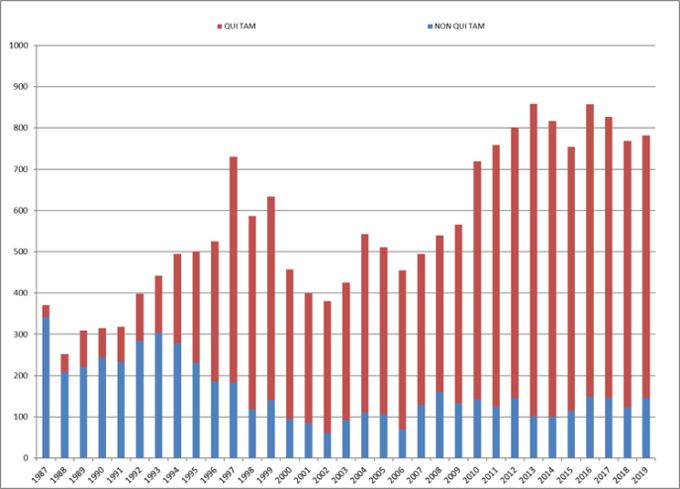 Qui tam suits (particularly those in which the government decides to intervene) also continue to drive the bulk of the recovery amounts. This year, more than $2.2 billion of the total $3 billion in settlements and judgments resulted from lawsuits originally filed under the FCA's qui tam provisions.5

Notably, the federal government recovered $1.9 billion (63% of the total amount of recoveries) in qui tam cases where the government intervened, and $844 million (28% of total recoveries) in non-qui tam cases (i.e., cases initiated by the government, not a whistleblower). This also means the government recovered $293 million (10% of the total) in cases where DOJ declined to intervene in a qui tam, the third highest total in declined cases during the last 20 years. This is also a significant increase from last year, when recoveries in declined cases were $135 million, and signifies the ongoing threat of FCA cases even if a company can convince the government to stand down in the first instance.6 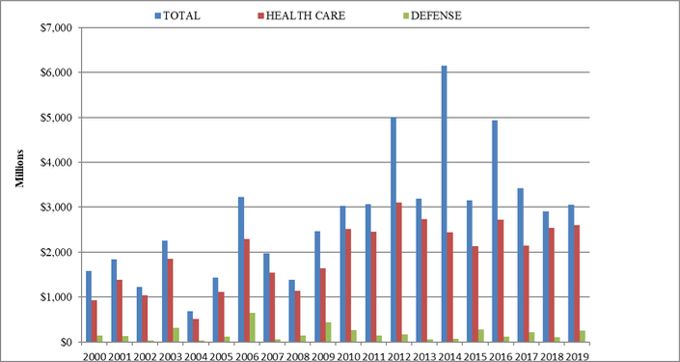 Enforcement efforts in the health care industry are notable for both their breadth and depth, targeting a wide variety of companies under a wide variety of theories. As in past years, however, a large number of the FCA settlements with health care companies were premised on alleged kickbacks, including violations of the Anti-Kickback Statute (AKS) and Stark Law. This year, in particular, DOJ also continued its strong focus on companies involved with the opioid crisis, including both opioid manufacturers and companies that provided services to opioid manufacturers.8

Outside of the health care space, the theories of liability and types of companies that DOJ targeted were more disparate. Among the most notable and novel theories this year included $162 million in settlements premised on a hybrid antitrust-FCA theory (a theory we discussed in our recent webcast on antitrust enforcement in the government procurement space). In that case, in particular, South Korean companies allegedly drove up fuel prices charged to the United State military through concerted anticompetitive conduct, as we covered in our 2019 Mid-Year False Claims Act Update.10 In another novel case, DOJ and a coalition of state attorneys general secured the first-ever FCA settlement premised on cybersecurity vulnerabilities, after a technology company failed to report or remedy flaws in the security surveillance system it sold to multiple states and the federal government. There was also an array of more traditional procurement and government contracting settlements, as discussed below.