by Louise Mansion
Marks & Clerk
Your LinkedIn Connections
with the authors

Coffee is never far from my mind. Particularly at this time of year, when we are treated to seasonal delights such as the gingerbread latte, the peppermint mocha, and even the chestnut praline frappucino®. However, one coffee that I had five years ago proved particularly notable despite being a humble, not in any way festive, regular latte.

December 2015 is when I was first drawn in to the world of patents. That included reading a patent for the first time. On the train. On the way to an interview for my current job as a trainee patent attorney for Marks & Clerk LLP.

The train journey from Glasgow to Manchester for the interview included a change at Carlisle, which seemed the perfect time at which to get breakfast. As remains my go to choice even today, I picked up a latte and a blueberry muffin.

Time-wise, 2015 seems not so distant, but culturally it seems a long way off where we are now. For me, 2019 was the year of the on-the-go reusable cup, and there is no denying that 2020 has been the year of sipping coffee from your favourite mug at home. But 2015 was arguably the height of our frivolous use of disposable cups without thought to the environmental consequences. So, as was expected at the time, my latte at Carlisle train station came in a single use vessel.

On the train out of Carlisle I noticed that the lid of the disposable cup had a patent number stamped into the plastic. When presented with such a glaring opportunity to educate myself a little more on the profession I was considering entering, it seemed the prudent thing to do to look up the patent and have a read. And what a read it was! Baffling. Mystifying. Why was it so verbose? Why was it so repetitive? What had I let myself in for?

Thankfully (whether due to that coffee or not) I have now had five years working in the world of patents to learn the answers to those questions, and I hope to be able to shed some light on those questions in this brief guide to the anatomy of a patent.

As any patent attorney will tell you, no good description of a thing is complete without accompanying figures to assist in the explanation, therefore in this case we will take European patent EP 1 118 549 B1 for a 'Disposable Cup Lid' as an example. I cannot say whether this is the same patent that I came across that day back in 2015, but it is sufficiently similar to provide a nice segue.

If you click on the patent number provided above, this will direct you to the 'espacenet' patent database where you can study the patent in more detail if you are so inclined. The 'espacenet' database is an invaluable resource where most published patents from around the world can be viewed.

Although this is a European patent that we are looking at here, patents from the majority of countries contain similar content presented in a similar way. 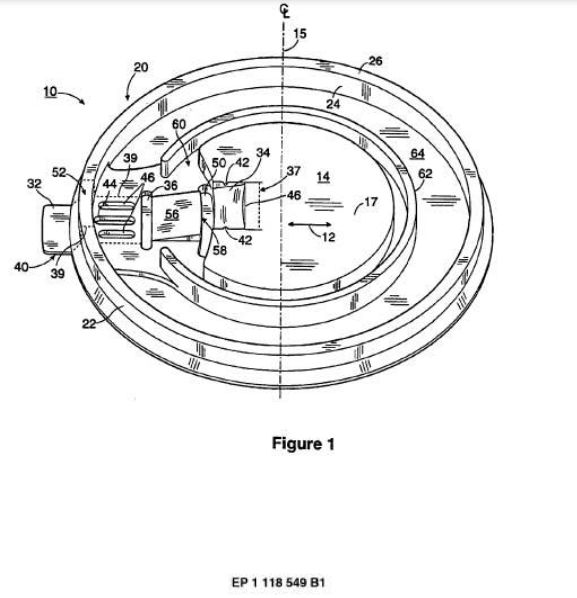 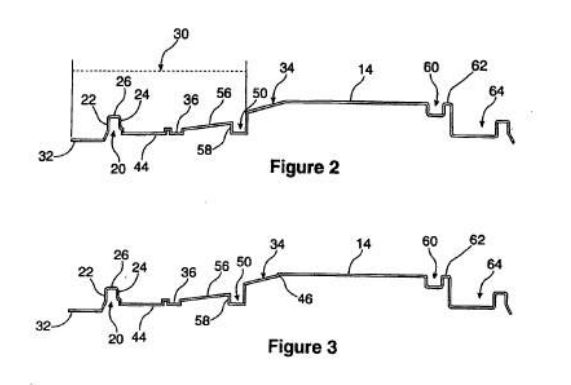 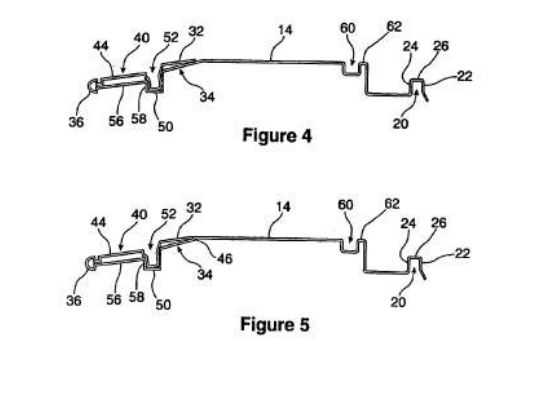 Unconventionally, we will now jump to the end of the text portion of the patent specification. This is the claims, and is titled as such so that it can easily be identified. We have B-lined for this section of the patent specification because the claims are the most important part of any patent. It is the claims that legally define the monopoly right afforded to the proprietor by the patent. The claims state the invention in sufficient detail that all of the features essential to making the invention new and inventive over what has gone before are included, but in as broad terms as possible so as to maximize the protection provided by the patent. The format of the claims is a series of numbered statements that define features of the invention. Some of the statements refer to preceding statements. This is a form of short hand to include all of the features of the referred to statement in the subsequent statement. Statements that do not make any reference to other statements are known as independent claims, and are the broadest definition of the invention. Statements that do refer to other statements are known as dependent claims.

Now that the important part is out of the way, we can look to the rest of the text portion of the specification – the description. This is where things can appear to be verbose and repetitive. But not without reason.

Background: First of all there is provided background information on the invention. This includes information on the general area of technology, the current 'state of the art', and problems associated with the conventional technology. In a granted European patent such as our example, you would expect the background to also include some reference to other patents.

These are the documents that have been identified as most relevant to the invention during the patent application process.

Detailed Description: Finally, there is a detailed description that sets out specific examples of the invention with reference to the figures. In some jurisdictions this section of the specification may be referred to as a best mode of implementation or similar. The language used in the claims and in the summary section appears again in the detailed description, however it includes further specifics of the examples depicted in the figures. As can be gleamed from the name of this section, these examples are set out in great detail. Where there are multiple different examples of the invention, the same or similar language will be used to describe common features between each example.

As you may have gathered, there is much emphasis on using consistent language throughout the patent specification, and on describing as many possible options as can be envisaged in as much detail as is available. The reason for this comes down to the process that a patent application must go through before it is granted.

In the majority of cases, the claims of a patent application will require some reformulating in order to ensure that they describe an invention that is new and inventive before the patent is allowed to grant.

The amendments made to the claims during this reformulation must come from the information that is provided in the patent application at the time that it is filed. New features cannot be introduced, and new combinations of features cannot be cherry picked from the original examples provided. The use of consistent language and providing as much information as possible in a patent specification allows for greater flexibility when it comes to that process of amending the claims.

Although their seeming verbosity and repetitiveness may result in patent specifications not making the most enthralling read on a long train journey, these are imperative characteristics for a patent to have the best chance of providing the proprietor with useful protection for their invention.

ARTICLE TAGS
UK Intellectual Property Patent
POPULAR ARTICLES ON: Intellectual Property from UK
Of Molecules & Medicine: A New Focus On Antibodies In 2021 Update To EPO Guidelines
Haseltine Lake Kempner LLP
Today, 1 March 2021, a whole new Guidelines section focusing on antibodies will enter into force.
High Court Judgment Highlights Importance Of Professional Representation
J A Kemp LLP
The recent case of Reaux-Savonte v Comptroller-General of Patents ([2021] EWHC 78 (Ch)) concerns an appeal from a decision of the Comptroller General, dated 19 May 2020...
How To Prove 'Passing Off'
Gowling WLG
'Passing off' does not have a statutory basis and doesn't need to be registered to be effective.
Getting Your Timing Right - Demonstrating Plausibility And When To File A Second Medical Use Patent
Haseltine Lake Kempner LLP
Deciding when to file a patent application can be a difficult decision.
Distinctly Different? Trade Marks And The Standards For Distinctiveness
Gowling WLG
The growth of the online world has meant that many brands which previously would have been accessible by and promoted to a section of society are now available to the world.
New EPO Guidelines For Examination Come Into Force
J A Kemp LLP
As discussed in our earlier news item here, one aspect of note in the new Guidelines is the introduction of a stricter approach to amending the description for conformity with the claims.
FREE News Alerts
Sign Up for our free News Alerts - All the latest articles on your chosen topics condensed into a free bi-weekly email.
Register For News Alerts
Article Tags
UK Intellectual Property Patent
Related Articles
How Patent Attorneys Start Their Career At HLK Haseltine Lake Kempner LLP
Antibodies In The European Patent Office - Basic Principles J A Kemp LLP
Antibodies In The European Patent Office - Advanced Guide To Drafting And Prosecution J A Kemp LLP
Covid-19: State Intervention In Times Of Vaccine Shortages Morrison & Foerster LLP
New EPO Guidelines For Examination Come Into Force J A Kemp LLP
Mondaq Webinars
International Transfer Pricing Trends from a Swiss Perspective - Practical Tips and Lessons Learned
Tax Partner AG
Webinar Zurich Switzerland
Survival Kit for the Latest Trends in U.S Trade Enforcement
Braumiller Law Group, PLLC
Webinar Texas United States
More Webinars
Comparative Guides
Anti-Corruption & Bribery
Banking Regulation
Blockchain
Cartels
Corporate Tax
Mondaq Advice Centres
UK
Coming to and Investing in the UK
Global
Trademarks in SAARC Countries
Global
Investment Immigration
More MACs
Upcoming Events
Patenting Antibody Pharmaceuticals At The EPO
J A Kemp LLP
Webinar London UK
Mondaq Social Media