by Yvonne Lang
Smith & Williamson
To print this article, all you need is to be registered or login on Mondaq.com.

The Future Of UK Financial Reporting: A Three-Tier Approach

With IFRS now applying to both full list and Aim companies, we look at the findings from our survey of the first Aim IFRS-compliant financial statements. We also consider the ASB's latest thinking on converging UK GAAP with IFRS.

The first IFRS financial statements Aim companies appear to be standing up well to the challenge of reporting under IFRS.

The revised Aim Rules require Aimlisted companies to present their financial statements in compliance with IFRS. This applies to periods beginning on or after 1 January 2007.

Nearly half (47%) of the companies surveyed voluntarily presented a directors' remuneration report, despite this only being a mandatory requirement for fully listed companies. This proportion increases, as might be expected, to 65% when the 20 largest companies are considered.

The trend of Aim companies voluntarily disclosing increased narrative information was also illustrated by the following:

We also noticed an increased focus on environment and social issues, with 16% of the companies presenting a separate corporate social responsibility statement/ report alongside their financial statements.

Of those surveyed, the longest annual report contained 112 pages, while the average length was 65 pages. On average, narrative information made up 37% of the total content.

In many areas of performance reporting IFRS allows for more choice and flexibility than UK GAAP.

In the income statement, IAS 1 provides the option to present expenses either by function (e.g. distribution costs, administrative costs, cost of sales) or nature (e.g. depreciation, amortisation, payroll costs, advertising costs) – a choice similar to that offered by the Companies Act. However, unlike UK GAAP, IFRS contains no requirement to draw a subtotal at operating profit.

97% of the surveyed companies continued to report an operating profit sub-total and 90% disclosed expenses by function rather than by nature.

The non-GAAP measures used included adjustments to profit after tax for amortisation and depreciation, provisions for impairments (primarily of goodwill or other intangible assets), exceptional costs or profits, fair value changes and share option or other 'non cash' expenses.

As permitted by UK company law, 47% of the groups surveyed opted to remain with UK GAAP for the parent's individual accounts. All of these companies presented the group and parent financial statements as separate sections in the annual report.

Out of the companies surveyed, only four had no employee share options in issue.

Under IFRS 2 'Share-based payments', accounting for equity-settled share-based payments results in a credit entry to equity. However, the standard does not specify where in equity this credit entry should be recorded. Therefore, there is a choice of treatment; the credit can either be taken to the profit and loss reserve or to a separate reserve established for this purpose.

67% of companies with employee options in issue opted to take the credit arising from the IFRS 2 share option charge directly to the profit and loss reserve rather than a separate reserve. Where companies established a separate reserve, the terminology was fairly consistent, with the most frequently used names being share-based payment reserve, share option reserve, equity option reserve and share scheme reserve.

ON THE FACE OF IT: REVISED IAS 1

The IASB has introduced a number of changes to the presentation of financial statements, including amendments to the balance sheet and cashflow statement.

The International Accounting Standards Board (IASB) has issued a revised version of IAS 1 'Presentation of Financial Statements'. While none of the changes are significant, they will still affect all IFRS-compliant financial statements. Subject to European Union (EU) endorsement, the revised standard is effective for periods beginning on or after 1 January 2009. Early adoption is permitted.

The revised standard introduces new terminology to replace that which has been used for many years. 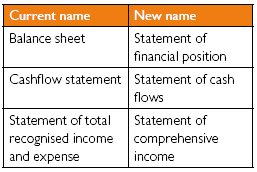 The statement of financial position

The statement of comprehensive income

Income tax on items of other comprehensive income

The revised standard contains a new requirement to disclose income tax for each item included within comprehensive income. This may be achieved either by presenting each item net of tax effects, or by presenting a single amount for the cumulative amount of tax relating to all the items. It will also be necessary to disclose the amount of income tax expense allocated to each item of other comprehensive income in the notes to the accounts.

As the result of its first improvement project, the IASB has 'tweaked' a number of standards including IAS 16, 38 and 40.

The IASB has recently issued revisions to a number of IFRS as a consequence of completing its first annual improvements project. The IASB views the project as an efficient way to make non-urgent but necessary amendments to IFRS.

The amendments, which are all contained in one document, were published in two parts. Part I contains the amendments that result in accounting changes to presentation, recognition or measurement, while Part II contains terminology or editorial changes only.

The majority of the changes in Part I deal with inconsistencies in some of the less widely applied aspects of standards and may therefore be of little relevance to most preparers. However, three of the improvements are likely to have wider application.

1. Assets that are both rented and subsequently sold

Some businesses, most notably in the leasing industry, both rent and subsequently sell the same asset. However, when such assets are derecognised (i.e. sold), IAS 16 'Property, plant and equipment' does not currently permit gains made to be included as part of revenue. IAS 16 has therefore been amended to permit entities whose normal business is both renting and subsequently selling the same asset to recognise both income from rental and from the subsequent sale as revenue. A consequential amendment to IAS 7 'Statement of cash flows' will also allow both rental and sale cash flows to be included as operating activities.

Preparers' inconsistent interpretation of the application of IFRS to the treatment of advertising and promotion costs has been subject to considerable debate amongst international standards setters. Initially, the International Financial Reporting Interpretations Committee (IFRIC) was asked to issue an interpretation on the subject, but after lengthy consideration they concluded that this was a matter most appropriately addressed by an amendment to IAS 38 'Intangible assets'. This amendment now forms part of the annual improvement project.

The IASB concluded that it would be inconsistent for an entity to recognise as an asset the costs associated with an advertisement that had yet to be published if the economic benefits flowing to the entity were effectively the same as those arising as a result of a brand or customer relationship which, while enhanced, could not itself be recognised as an asset. Consequently, the amendment to IAS 38 prohibits recognising goods or services received in respect of future advertising or promotional activities as assets.

These three amendments apply for periods beginning on or after 1 January 2009 with early application permitted in all cases. However, the amendment to IAS 40 can only be applied early if the fair value of investment properties under construction was determined at that date.

There are a number of further changes which are unlikely to have a widespread impact. The other standards subject to amendment are as follows.

THE FUTURE OF UK FINANCIAL REPORTING: A THREE-TIERED APPROACH

The ASB is looking to converge IFRS and UK GAAP by implementing a tier-based system.

The UK Accounting Standards Board (ASB) is preparing a discussion paper detailing its proposals for the convergence of UK GAAP with IFRS. The particulars were published in the April edition of its newsletter Inside Track. The paper is anticipated to set out a three-tier structure for UK financial reporting.

These entities will have to apply full IFRS when preparing their financial statements. The ASB is yet to conclude which entities will be regarded as publicly accountable.

Tier 2: All entities that do not fall into tier 1 or 3

These entities will have to apply IFRS for Private Entities (the working title of the standard formerly known as IFRS for Small and Medium-sized Entities).

Smaller entities will have to apply the ASB's Financial Reporting Standard for Smaller Entities (FRSSE).

The ASB does not want to reach its final conclusions on such an important subject without proper consultation with interested parties. In addition to inviting comments on the discussion paper, it is also planning to hold a series of roundtable meetings – an approach that has proven to be extremely beneficial in the past.

The main issue upon which the ASB is still undecided is where to draw the cutoff points between the tiers. The ASB will need to consider the views of its constituents as well as how any tier-based system in the UK would interact with the EU's Accounting Directives.

The timetable for convergence will be significantly influenced by the publication of the IFRS for Private Entities. This is not expected until 2009 at the earliest and the standard is unlikely to be effective prior to 2011. In the past, the ASB has suggested that any move to a threetier approach would have to follow the successful introduction of IFRS for Private Entities.

2008 has been relatively quiet in terms of financial reporting changes. However, IFRIC has recently published interpretations for IFRIC 15 and 16, while the ASB has updated the FRSSE.

The ASB has issued a new version of the FRSSE. This incorporates the changes to the small companies accounting and reporting regime resulting from implementation of the Companies Act 2006. There are no changes to accounting requirements.

IFRIC 15 'Agreements for the construction of real estate'

IFRIC 15 standardises the accounting treatment for the recognition of revenue by real estate developers for sales made 'off-plan'. The interpretation provides guidance on how to determine whether the related construction contract should be accounted for using IAS 11 'Construction contracts' or IAS 18 'Revenue recognition'. This interpretation applies for periods beginning on or after 1 January 2009 and applies retrospectively.

IFRIC 16 'Hedges of a net investment in a foreign operation'

IFRIC 16 clarifies a number of issues relating to hedge accounting, including the following.

The table below summarises the effective dates for new and revised IFRS and IFRIC interpretations. Those that are shaded have not yet been endorsed by the EU and the effective date will be contingent on successful endorsement. 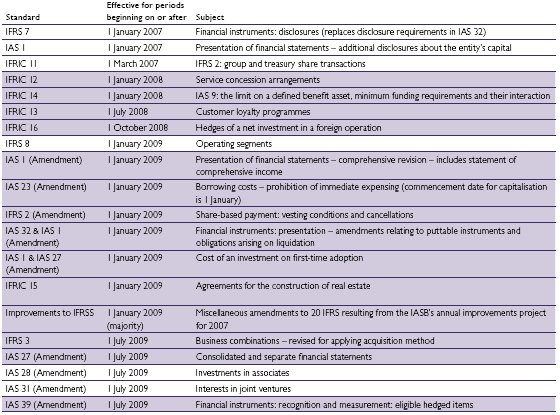