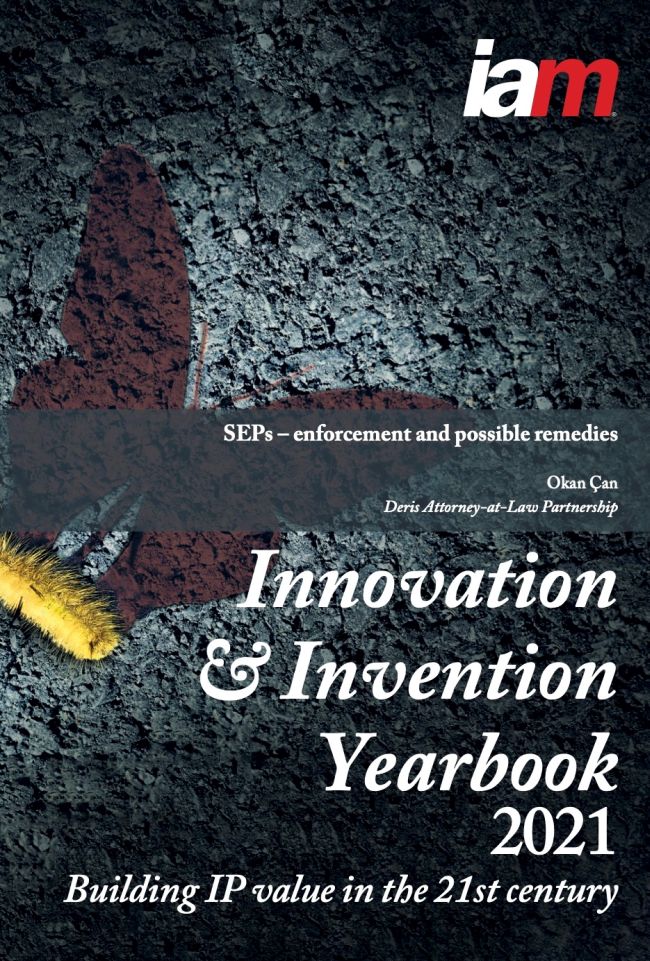 The debate over finding a concrete legal framework for the enforcement of SEPs was one of the hot IP topics of 2020. The German Federal Supreme Court's recent ruling on FRAND rules for SEPs in Sisvel v Haier based on the European Court of Justice's (ECJ) landmark Huawei v ZTE ruling has brought new dimensions to the debate - the discussion is far from over.

A standard is a document that sets out requirements for a specific item, material, component, system or service, or describes
in detail a particular method or procedure. Standards support commercial activity and boost innovation by providing compatibility and interoperability between technologies. The patent that protects the technology essential

Turkey began discussing the licensing of SEPs following a decision by the Turkish Competition Authority at the end of 2019, in which the authority referred for the first time to FRAND terms regarding a patented technology.

Turkey has a largely youthful population of 82 million. Internet access in households across the country stood at 88.3% in 2019 and 77.39 million mobile connections were announced in 2020.

This makes Turkey one of the key markets for the technologies protected by SEPs, and it is therefore often a witness to new SEP disputes.

The IP Code enables the patentee to protect and enforce its patent rights against infringing activities but makes no distinction for the enforcement of the SEPs..

Asserting SEPs against a third party

Huawei provides that an SEP owner should first prove its willingness to license its technology to the infringer before bringing an action in court; and that the action should be brought only if the infringer fails to act in good faith and does not comply with commercial practices. Likewise,

in Sisvel, the court declared that SEP owners must notify an implementer of the infringement and, in return, the implementer should clearly and unconditionally declare its willingness to obtain a licence. In both Huawei and Sisvel,
the courts referred to the need to establish a voluntarily concluded licence agreement before initiating legal action. Therefore, should the courts' approach be implemented, a notification of infringement and a willingness to license, as well as an offer or counter-offer on FRAND terms, are expected to be proven by the litigating parties. During negotiations, both parties should willingly engage in good-faith negotiations, with a view to establishing licensing conditions that are FRAND compliant.

Setting a FRAND-compliant licence and reasonable royalty rates are usually the main topics of the licensing negotiations. Since the definition of FRAND is vaguely defined in legislations and guidelines, and a methodology for FRAND negotiation is made ex post by case law, FRAND licensing terms may not be universal and suitable royalties may therefore be dependent on the relevant sector, time and market of the licensing parties.

Opportunities to leverage unique circumstances and still arrive at FRAND licence terms may be available, meaning that courts can be reluctant to issue injunction orders if there is still a possibility for settlement.

"Although preliminary injunction requests are commonly filed with respect to patent infringement matters, the courts can be more hesitant to order an injunctive order at the outset of proceedings for SEP infringement"

So far, Turkey has issued no rulings concerning either preliminary injunctions or permanent injunctions in relation to SEPs. Therefore, the courts' approach towards injunction is unknown to the legal community, as there is no prohibition or pre-condition either for the patent or SEP owner to initiate litigation in the Turkish Procedural Law or the IP Code. However, assuming that the licensing negotiations are unsuccessful, there are a number of options for enforcement available for SEP owners in the absence of any settlement.

Evidential action for determining an act of infringement

It is possible to file a non-adversarial action, which may proceed ex parte subject to the court's discretionary competence, for the determination of the act of infringement or evidence, or both. A positive outcome of such action can serve as official evidence, as the determination of the infringing act and evidence within the context of the subsequently filed main civil action.

Moreover, the patentee is entitled to request the determination of the production capacity and the process of production for facilitating the calculation of damages in the next stages of the proceedings.

The patentee is entitled to obtain a preliminary injunction:

Although preliminary injunction requests are commonly filed with respect to patent infringement matters, the courts can be more hesitant to order an injunctive order at the outset of proceedings for SEP infringement.

The Turkish courts, although not bound by the precedents rendered by foreign courts, may consider referencing case law that has evolved in other jurisdictions. This is especially true for the recent German Federal Supreme Court ruling on FRAND rules for SEPs and the landmark ECJ ruling Huawei in evaluating the conditions of preliminary injunctions.

The courts may also use their discretion to invite the parties for a settlement as part of the initial examination phase of the trial.

The IP Code enables the patentee to request simultaneously the 'determination and prevention of infringement' from the court as a part of the permanent injunction order by the final ruling.

Compensation of material and moral damages

Article 151(1) of the code states that damages suffered by the patentee cover both the actual loss and the loss of profit. The loss of profit can be calculated according to one of the below methods, as preferred by the rights holder:

The IP Code stipulates that the factors such as the nature and extent of infringement, particularly the economic importance of the industrial property right or the number, term and type of licences related to the patent in dispute and at the time of infringement, must be considered when calculating the loss of profit.

The patentee who prefers the method of calculation for probable income or net income earned may request to add an appropriate amount to the calculated compensation in case the patent has a determinant role in the demand for the infringing product in the market. In addition, the patentee is entitled to ask for moral and reputational compensation where the reputation of the patent right suffers damage, in the event that the products or services forming the subject of the right were used or produced in an inferior manner or where such products are launched in the market or made available in an improper manner.

Since setting a FRAND-compliant licensing agreement and reasonable royalty rate are the main topics in enforcing SEPs, the SEP owner is expected to select the option in accordance with the licensing fee required to be paid in case the implementer has used such right by means of a licensing agreement.

According to Law 7155, which entered into force in 2019, mediation is now mandatory for all types of IP dispute involving the collection of receivables or compensation claims. This means that the SEP owner, before initiating any action against infringing past use, must mediate before filing an action. The mandatory mediation for IP disputes that involve a commercial payment can evidently pave the way for negotiating a licence of the SEP in FRAND terms.

Compulsory licensing is rare in Turkish practice. It appears that there has been only one dispute that has been amicably resolved before the court when the currently repealed decree laws were in force.

Possibility for compulsory licence of SEPs

The Turkish IP Code, which entered into force in 2017, has introduced grounds for requesting a compulsory licence. Article 129 mentions a number of grounds on the basis of which compulsory licences may be requested and granted:

Article 132 of the IP Code states that the Turkish presidency (formerly the decision was rendered by the Council of Ministers) is entitled to grant a compulsory licence in cases where:

Two grounds can be used for claiming compulsory licensing for SEPs:

Compulsory licensing is rare in Turkish practice. It appears that there has been only one dispute that has been amicably resolved before the court when the currently repealed decree laws were in force.

The Competition Board decided on an SEP dispute regarding FRAND-compliant SEP licences at the end of 2019 and issued the motivated decision at the beginning of 2020. The board complies with EU legislation and is likely to choose one of the approaches employed in EU jurisprudence for its analysis.

The board issued no rulings concerning SEPs before the 2019 decision. It has, however, in the past issued a decision concerning the standardisation of a technology in Yonga Levha (Competition Board 03-56/650-298, 14 August 2003). The decision is an example of the conflict between technical standardisation and antitrust regulations in Turkey. It addresses the potential anti-competitive conduct between competitors by changing technical standards in the particle board and chipboard sector. While evaluation of discriminatory behaviour by the collaborators is made during the investigations, the case does not refer to SEP licences or FRAND terms in depth.

In the current Competition Board decision - for which the motivated decision was issued in 2020 - the board decided that there had been a breach of competition by the SEP owner on grounds of abuse of dominant position in the relevant market - including:

Correlations between intellectual property and competition law and anti-competitive behaviour concerning IP litigation and transactions, were discussed in the board's reasoning via the economic valuation test and FRAND principles. The board also referred to Huawei and relevant ECJ case law in its decision.

The current decision is important in constituting a landmark decision concerning SEP licensing by the board and is likely to be considered as a reference in upcoming SEP disputes.