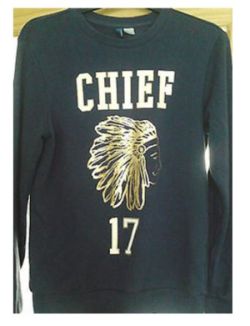 The Amsterdam District Court has decided that H&M infringed the trade mark rights of Jeans Centre by selling sweaters on which the sign CHIEF was displayed in large capitals (see above). The H&M sweaters also had an image of a native American and the number "17" below the word CHIEF.

Jeans Centre based its claims on Article 2.20 paragraph 1(a) of the Benelux Convention on Intellectual Property ('BCIP'), which is the equivalent of Article 9 paragraph 2 (a) of the EU Trade Mark Regulation. According to Jeans Centre, the CHIEF sign used by H&M is identical to the word trade mark CHIEF since it reproduces, without any modification or addition, all the elements constituting the trade mark or where, viewed as a whole, it contains differences so insignificant that they may go unnoticed by an average consumer.

H&M denied that the CHIEF sign is identical to Jeans Centre's trade mark since the used sign also consists of the image of a native American as well as the number "17". According to H&M these other signs will be immediately noticed by the average consumer and therefore will not go unnoticed. The Amsterdam District Court however ruled in favor of Jeans Centre arguing that the CHIEF sign is visually the most dominant sign on the H&M sweaters. Since the other signs are displayed separately and do not consist of words, the Court came to the conclusion that the CHIEF sign has a separate distinctive position on the sweater. Since consumers, according to the Court which was not disputed by H&M, are used to the fact that trade marks are often used in combination with other visual elements, these other visual elements can go unnoticed in the global assessment made by the average consumer. Therefore, the Court came to the conclusion that H&M infringed Jeans Centre's trade mark and ordered H&M inter alia to cease the infringement and pay damages and also the full legal costs (EUR 37.087,71) of Jeans Centre.

It will be interesting to see what will happen if H&M appeals this decision and argues that the use of the CHIEF sign was not used in respect of goods or services but merely as a decoration. Furthermore, it will also be interesting if this use of the CHIEF sign can affect or be liable to affect the functions of the trade mark owned by Jeans Centre, in particular its essential function of guaranteeing to consumers the origin of the goods or services. Given the circumstances in this case there might be good reasons for H&M to appeal the decision of the Amsterdam District Court.

ARTICLE TAGS
Netherlands Intellectual Property Trademark
POPULAR ARTICLES ON: Intellectual Property from Netherlands
The Unitary Patent Approaches The Finish Line: What's Next For Patent Owners?
Mathys & Squire
Good things come to those who wait. After years of seemingly little to no progress and challenging negotiations, and with the Unitary Patent being on the verge of introduction several times, the time has finally come.
Due Diligence - Blood, Sweat And Tears Required?
Marks & Clerk
Over the last few months I have been following updates to the trial of Elizabeth Holmes in "The Drop Out" podcast.
Nike Enters The Metaverse
Marks & Clerk
This is a clear reflection of the intention of brand owners to monetise the metaverse via the sale of virtual goods.
New AI Consultation - UK Considering New Types Of IP Protection
Marks & Clerk
On 29 October 2021, the UK IPO launched a further consultation on IP Protection and AI.
Artificial Intelligence And Intellectual Property Rights
Destek Patent
Artificial Intelligence (AI)means enabling machines and computers to imitate the learning, perception, decision-making, and problem-solving capabilities of a human being(IBM, 2020).
How To Prove 'Passing Off'
Gowling WLG
'Passing off' does not have a statutory basis and doesn't need to be registered to be effective.
FREE News Alerts
Sign Up for our free News Alerts - All the latest articles on your chosen topics condensed into a free bi-weekly email.
Register For News Alerts
Article Tags
Netherlands Intellectual Property Trademark
Related Articles
HEMA / Lacoste: Good Market Research Can Make The Difference Global Advertising Lawyers Alliance (GALA)
Avoid The Crocodiles (At All Lacostes) ENSafrica
How To Independently And Efficiently Benchmark Executive Remuneration For Say-on-Pay CGLytics
Neurim: A "Rare Wild Animal"? Dentons
Tom Kabinet: CJEU Rules Resale Of E-Books Requires Permission Of Copyright Holder Hogan Lovells
Mondaq Webinars
Reshaping Strategies for Wealth Management in the Post-Pandemic Economy [REPLAY]
Wedlake Bell
Webinar London UK
Hot Topics in Fund Finance [REPLAY]
Cadwalader, Wickersham & Taft LLP
Webinar New York United States
More Webinars
Comparative Guides
FinTech
International Arbitration
Labour and Employment
More Guides
Mondaq Advice Centres
Global
Trademarks in SAARC Countries
More MACs