South Africa: Time To Get In Shape!

Whilst it is difficult to obtain statutory trade mark protection for shape trade marks it is not impossible.  To determine whether a shape trade mark is registrable one has to assess whether the proposed shape trade mark is inherently registrable i.e. is it distinctive or capable of distinguishing one's goods from those of third parties operating in a similar field of trade?  The assessment also goes to the heart of what constitutes a trade mark, which is whether it functions as a badge of origin. It is important to note from the outset, that a shape mark that may be considered not to be sufficiently inherently distinctive to qualify for registration and may acquire distinctiveness through use and therefore be capable of registration.

In the 2016 Kit Kat case in the UK, Nestle failed in its attempt to register the shape of its four fingered Kit Kat chocolate bar. The Court held that the shape of a Kit Kat did not function as a badge of origin to consumers, unlike the word mark Kit Kat which serves as a source identifier, as consumers did not identify the product or its trade source through its shape primarily because the product is sold in a wrapper and the product itself is therefore not visible to consumers when viewed on the shelves. Does this mean that the shape of a product that is sold in packaging that obscures the shape is unlikely to be capable of trade mark registration going forward?  Not necessarily, as other shape marks have been registered, in the UK for example, for products that are sold in such packaging, for example the Toblerone bar. One of the major stumbling blocks in the Kit Kat case was Nestle's failure to show that the shape of its chocolate bar had acquired distinctiveness through use and therefore functioned as a badge of origin.

In the recent 2016 London Taxi case in the UK, the London Taxi Company (the LTC), who was the proprietor of various 3D shape marks for the famous "Black Cab" in the EU and the UK, as depicted below: 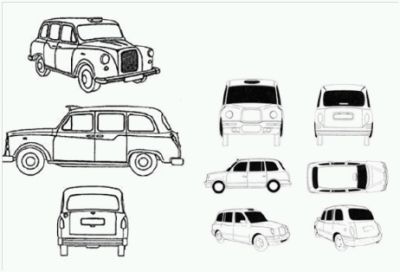 sued Frazer-Nash Research Limited (FNR) and Ecotive Limited for trade mark infringement and passing off on the basis of the design of its Metrocab taxi depicted below:

One of FNR and Ecotive's main counter-claims was that the LTC's trade marks lacked distinctiveness. The Court (notably lead by the same judge as that in the Kit Kat case, namely Judge Arnold) held that the LTC's shape marks were not inherently distinctive, as the marks were not source identifiers to the relevant class of persons or average consumer, which was held to be the average taxi driver.  The shape marks would be perceived by the average taxi driver, in Judge Arnold's view, as variants of the standard shape of a licensed London taxi or "black cab". As in the Kit Kat case, the LTC failed to adduce any survey evidence to show that the shape marks had acquired distinctiveness through use.

A piece of jewellery typically viewed by a consumer in a display cabinet (and thus in unpackaged form), if unique and distinctive, can function as a shape trade mark and therefore as a badge of origin and/or as a source identifier.  For example, Tiffany & Co's interlocking circles pendant, depicted below, could function as a shape trade mark.  In South Africa, a number of shape marks have been filed and registered in class 14 to cover jewellery products, giving brand owners a favourable unlimited monopoly in such an intellectual property right.  Assuming certain jewellery "shapes" were filed, and held not to be inherently distinctive, furnishing sufficient evidence of prior use for at least two years prior to the date of filing, showing that the shape mark has acquired distinctiveness, and thus functions as a badge of origin and source identifier (as originating from Tiffany & Co, for example), may be sufficient for overcoming any inherent registrability concerns raised by the Registrar of Trade Marks.  These would be raised by the Registrar of Trade Marks upon examination of the application for registration of the mark, or by the High Court if a third party dispute arose in which the distinctiveness of the mark was challenged. 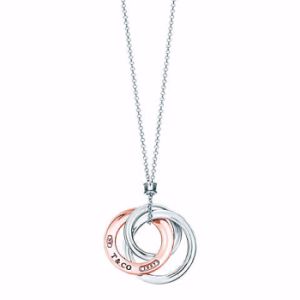 As an additional form of intellectual property protection, filing an aesthetic design to protect the shape of an article whilst the shape in question acquires distinctiveness through use is recommended, as long as the shape is both new and original, as it is a quick process. Ideally a design application must be filed before the release date (which is when the design is first made available to the public) failing which it must be filed within 6 months from such release date.  An aesthetic design registration endures for 15 years whilst a trade mark registration gives the proprietor a perpetual monopoly, as long as the trade mark is renewed every 10 years from the date of filing the original application.

Based on applicable trade mark law principles and an evaluation of foreign precedent where currently no recent local case law exists, if a proprietor wishes to obtain a trade mark registration, and thus an infinite monopoly in and to the shape of a specific product particularly where the shape is initially held not to be inherently distinctive, such proprietor should be in a position to produce evidence of use of the shape as a trade mark spanning at least 2 years prior to the date of filing the application.  This will assist in showing that the shape has acquired distinctiveness through use, and therefore functions as a badge of origin.

ARTICLE TAGS
South Africa Intellectual Property Trademark
POPULAR ARTICLES ON: Intellectual Property from South Africa
Types Of Trademarks: All You Need To Know
Abou Naja
As industries race to gain a legal monopoly on their unique innovations through marks registration, we are inundated with an ever-increasing number of products with
Requirements And Procedure For Registration Of Trademarks In Nigeria
Pavestones Legal
Over the years, trademarks have gained prominence around the world as one of the most important intangible assets of any business. Trademarks play a crucial role in branding as they provide businesses and their products with a unique identity.
Intellectual Property In Nigeria: A Summary Of Protectable Rights In Nigeria
Olisa Agbakoba Legal (OAL)
Generally, Intellectual Property ("IP") covers products of intellectual creations. However, it can also mean a generic term that describes creations of the intellect concerning which the law ascribes the...
حقوق فناني الأداء في قانون الملكية الفكرية
Andersen in Egypt
.أصبحت حماية الملكية الفكرية، في السنوات الأخيرة، مجال اهتمام متزايد في المجال الق
Easier Formality Of Documents Related To Patents And Industrial Designs
United Trademark & Patent Services
The Ministry of Economy issued a circular email on September 13, 2022, announcing the new legalization requirements for the powers of attorney (PoA) related to patents and industrial designs.
Copyright And The Protection Of Creatives
Inventa
This article serves the purpose of educating creatives on the importance of copyright laws in Nigeria. It also provides insight into the major aspects of copyrights, its protection...
FREE News Alerts
Sign Up for our free News Alerts - All the latest articles on your chosen topics condensed into a free bi-weekly email.
Register For News Alerts
Article Tags
South Africa Intellectual Property Trademark
Similar Articles
Powered by mondaq AI
MATCH
86%
Vespa And Kit Kat – Is Trade Mark Law Out Of Shape? ENSafrica
84%
The Kit Kat Shape – Another Perspective ENSafrica
84%
Trade Marks: Lipsticks And Coffee Capsules ENSafrica
83%
Another Chapter In The Kit Kat Shape Saga ENSafrica
82%
Rubik's Cube – Is Trade Mark Law Out Of Shape? ENSafrica
Related Articles
Preventing Genericide: Saving Your Trade Mark From Falling Prey To The Public Domain Adams & Adams
The Claws Are Out In The South African Tammy Taylor Nails Saga. What Are The IP Law Implications? Barnard Inc.
Adams & Adams Anticounterfeiting Team Roll Out Seizures Of Counterfeit Roller Bearings In 3 Provinces Adams & Adams
Copyright And The Rights Of Blind People ENSafrica
The Metaverse, Cryptos, NFTs And IP ENSafrica
Mondaq Webinars
The New Swiss Data Protection Act - What You Need To Know
FABIAN PRIVACY LEGAL GmbH
Navigating the AI Legal Landscape
INQ Law
More Webinars
Comparative Guides
Dominance
Labour and Employment
Private Equity
More Guides
Mondaq Advice Centres
Global
Trademarks in SAARC Countries
More MACs
Upcoming Events
Mondaq Social Media