Hey Lagosians! There is a new sheriff in town!

In an island with over 6 (six) million active people who are always on the move, the keywords in the transport system have to be safe, fast, effective and efficient. The inhabitants must be presented with a transport system that moves with the speed of light, encouraging more deals to be closed, more commercial activities and ultimately more money to the government.

In line with its Bus Reform Policy (BRP), the Lagos state Government ("LASG") passed the Lagos State Transport Sector Reform Law 2018 ("the Law"). The long awaited messiah, with the mission to create sanity on Lagos roads by raising the dignity of commuters and commercial vehicle drivers in the state and to restructure motor parks across the state, in a way that discourages sale of alcohol and such other illicit substances at motor parks. Put quite frankly, the Law has put a structure in place to determine the continued operation of danfos (commercial buses), okadas (motor cycles), and keke napeps (tricycles) on Lagos roads.

The Law has quite a number of interesting provisions and a good list of transport offences within the state, with punishments ascribed to each offence. Since ignorance of the law is not an acceptable excuse, I have tried to highlight some of these interesting provisions and the traffic offences as well as the punishments applicable to each of them. I will also discuss some matters arising out of the Law and propose recommendations for further review in order to have a safe, fast, effective and efficient transport system in Lagos state.

Some salient provisions of the law

Restriction of motorcycles and tricycles: the combined reading of sections 46 of the Law and section 15 of the Regulation made pursuant to the Law prohibit the operation of motorcycles and tricycles of 200cc engine capacity on major highways within Lagos State. In other words, for a motorcycle and a tricycle to commercially operate (and by this I mean, to commute persons) on any major highway within Lagos state, such motorcycle or tricycle's engine capacity must be above 200cc. The only exception from this provision is a motorcycle used for mail distribution, which is prohibited from carrying passengers. This however must be fitted with properly fixed mail cabin on the pillion and must obtain the permission of the Lagos State Ministry of Transport prior to commencement of mail distribution.

Interestingly, the Law further provides that no one should drive, ride or be carried on a motorcycle without wearing a standard protective helmet. Additionally, having more than two (2) people on a motorcycle is prohibited; so, also is carrying a pregnant woman, a child below the age of twelve (12) years and an adult with a baby or a heavy/large load placed on the head or which obstructs normal sitting on the motorcycle. In addition, the rider of a motorcycle must not carry any person in front of him on the motorcycle.

Any person who fails to comply with the above provisions commits an offence and is liable upon conviction by a competent court, to imprisonment for a term of three (3) years. However, it doesn't end there; such a motorcycle or tricycle will also be impounded by the LASG. It is important to also state that where a rider of a motorcycle or a tricycle is convicted for the above offence, the passenger (except in the case of a child) will also bear the same punishment.

To start with, I think that setting a standard for the operation of motorcycles and tricycles on Lagos roads is an indication that the LASG recognizes the vital role these means of transportation play in the lives of Lagosians. It is indisputable that, considering the unbearable traffic condition in Lagos, the fastest means of commuting on the state roads are motorcycles and or tricycles. Unfortunately, setting a benchmark that only motorcycles or tricycles with engine capacity above 200cc can operate on highways is also an indication that the LASG intends to displace these means of transportation from the state roads. This is because most riders cannot afford motorcycles and tricycles with engine capacities above 200cc.

Accordingly, I believe the LASG can better enhance these means of transportation, by investing in the same. For example, it could establish a scheme for state-owned motorcycles, just like the Bus Rapid Transportation system (BRT), which will operate on dedicated lanes just like the BRTs. To curb potential reckless and insane driving common amongst motorcyclist, LASG would ensure proper screening and training of riders before onboarding into the system. It could also put in place continuous trainings for the riders. This scheme could further make commuting easier for Lagosians while also being a source of revenue generation for the LASG.

Control of Trailers and Long Vehicles: Section 45 of the Law prohibits any trailer other than petrol tankers and long vehicles used in conveying passengers from entering into or travelling within the metropolis of Lagos between 6.00am and 9.00pm. The Law further provides that any driver who contravenes this provision will have his vehicle impounded and will also be liable on conviction to a fine of N50, 000.00 (Fifty Thousand Naira) or a term of imprisonment for six (6) months or both.

It is my opinion that the above provision, if properly implemented, will reduce the rate of accidents caused by trailers on Lagos roads.

Public Bus Services Reform: The law contains provisions aimed at ensuring the efficiency of bus services in Lagos State as well as rebranding the State transport system. According to the Law, bus drivers will start wearing uniforms as approved by the LASG. It also contains code of conduct for bus drivers as well as passengers. Imagine a Lagos with uniformed bus drivers and outstanding manners!

Offences and penalties under the law

The Law contains a list of traffic offences and penalties, some of which I have highlighted below: 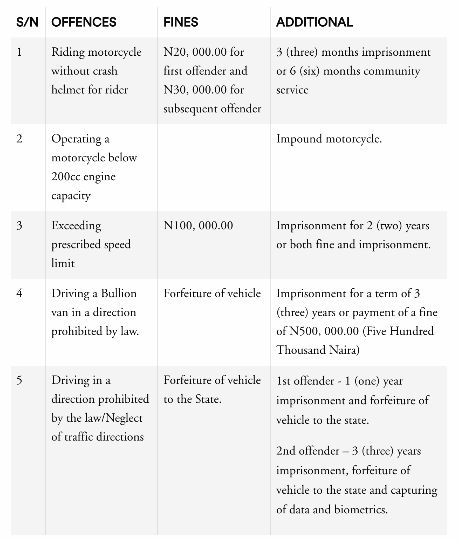 The innovations presented by the Law are laudable and has the potential of revamping the transport sector in Lagos State. However, it is one thing to have a law in place, it is another thing to ensure proper implementation. The former without the latter makes the law a toothless bulldog. It is very important that the LASG defines a structure for implementation of the Law in order to actualize the vision to reform the Lagos State transport sector. Lagosians await the unfolding of a new dawn in its transportation system and the reality of a safe, fast, efficient and effective means of transportation for all.

ARTICLE TAGS
Nigeria Transport Rail, Road & Cycling
POPULAR ARTICLES ON: Transport from Nigeria
Impact Of COVID-19 On The Shipping And Maritime Industry
STA Law Firm
The outbreak of the infectious disease named as the coronavirus disease (COVID-19) caused by the newly discovered coronavirus has caused chaos and panic all over the...
Maritime Claims–Practices, Procedures And Enforcements
B Ayorinde & Co
Litigation in our Courts in Nigeria today is known to be long-winding and it is not uncommon for cases to remain in Courts of first instance for 5 years while the pursuit of a case up to the Supreme Court may take a period of about 10 years.
Transportation Of Iron Ore In Bulk From Sierra Leone (Liquefaction And Fluidization)
Esenyel Partners
In the recent studies, the lack of oversight at loading ports and the detection of excessive wetting and hence liquefaction and fluidization, particularly in Iron Ore cargoes exported from the African country of Sierra Leone, were described as worrying level
Technical Aspects Of Aircraft Leasing (Part 1 Of 2)
STA Law Firm
In the first issue of this two-part series, aviation lawyers at STA discuss the types of aircraft leasing and the legal aspects therewith.
Understanding The Business Opportunities In The Nigerian Maritime Industry
Brooks & Knights
The primary laws applicable to the maritime industry in Nigeria are: The Merchant Shipping Act 2007; the Coastal and Inland shipping (Cabotage) Act 2003...
Arrest Of Ship Under Maritime Law: Practice And Procedure
Famsville Solicitors
One fundamental aspect of the maritime industry is the right given to claimants in maritime disputes, based on certain procedures, to arrest a ship as security for their claims.
FREE News Alerts
Sign Up for our free News Alerts - All the latest articles on your chosen topics condensed into a free bi-weekly email.
Register For News Alerts
Article Tags
Nigeria Transport Rail, Road & Cycling
Related Articles
Arrest Of Ships In Nigeria: An Overview Of The Procedure Kenna Partners
Aviation Finance Comparative Guide Alex Izinyon & Co.
Arrest Of Ship Under Maritime Law: Practice And Procedure Famsville Solicitors
Determination Of Damages In Aviation Claims In Nigeria Kenna Partners
The Petroleum Shipping Industry & The Burden Of Tax Compliance In Nigeria Andersen Tax LP
Mondaq Webinars
What Can Be Achieved in Luxembourg in Terms of Securing Assets in Pre-Trial, Pre-Enforcement Situations?
Bonn Steichen & Partners
Webinar Luxembourg Luxembourg
Hot Topics in Fund Finance [REPLAY]
Cadwalader, Wickersham & Taft LLP
Webinar New York United States
More Webinars
Comparative Guides
Aviation Finance
Corporate Governance
FinTech
Insurance
International Arbitration
More Guides
Mondaq Advice Centres
Global
Trademarks in SAARC Countries
More MACs