The value in companies derived from intangibles and intellectual property has increased substantially in recent years. Surprisingly, that value is often not properly recognized or used. However, companies can use revenue streams from IP to raise cash to fund operations, expand, or even address pension deficits by isolating IP and issuing securities backed by the cash flows (IP securitization). This article examines some of the tax, structuring, and commercial considerations involved in IP securitization.

IP rights vest ownership in the creators and owners of inventions, products, or brands and prevent others from using them without the creator's consent, and may also be used to prevent a third party from creating or using something similar. The main rights that lend themselves to securitization are patents, trademarks, and copyright.

Typically, some companies in a corporate group will hold IP rights (IP Holdco) while others in the group or third parties pay royalties or license fees to use that IP. This income stream can be sold to a newly formed special purpose vehicle (SPV), thus creating cash for immediate use by the group. The SPV raises the cash by issuing bonds to investors backed by the IP cash flows. A typical structure is illustrated in the figure. There is flexibility in structuring. The SPV might be a group company or an ''orphan'' with its shares held in a charitable trust. The SPV does not need to own the IP outright as long as it has the right to the IP income streams.

Different series or tranches of bonds may be issued to respond to investor demand for different maturities and credit qualities. The tranching and pricing of the bonds are based on an analysis of the reliability and predictability of the timing and amount of the revenue streams transferred to the SPV, and on senior or subordinated structures or financial guarantees from the corporate group or third parties.

The first major transaction to securitize IP was in 1997 when singer David Bowie raised $55 million by securitizing royalties from his back catalog. Royalty Pharma, a U.S. company, structured a securitization issuing $225 million in AAA-rated bonds backed by biopharmaceutical patents in 2003. From 2005 to 2007, companies such as Dunkin' Brands, Quiznos, Sears Holdings Corp., IHOP, and Domino's Pizza established IP-based securitizations backed by trademark and franchise royalties ranging from $200 million to $1.85 billion. Vertex Pharmaceuticals issued a $240 million securitization in July 2009 from which investors were repaid from license payments regarding the drug Telaprevir. Morgan Stanley has advised on 18 pharmaceutical-based securitizations since 2004. 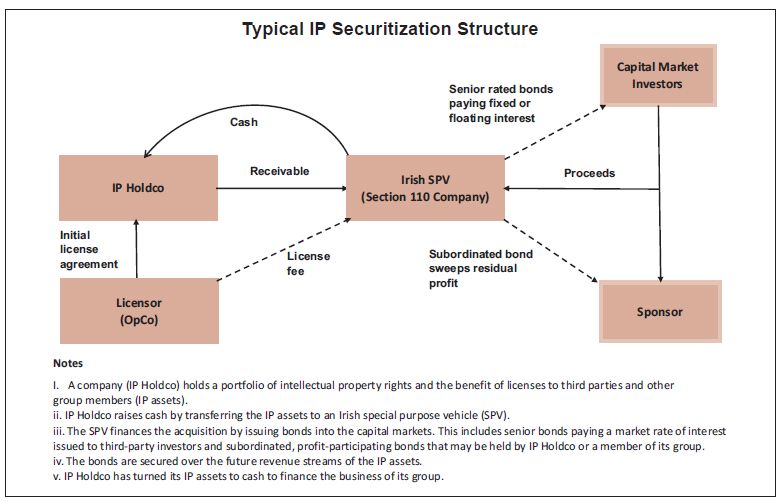 Securitization has several benefits. It allows a longterm income stream to be converted into cash for immediate use and allows IP asset risk to be transferred to capital markets investors. It also can create tax efficiencies for the group and can facilitate the strategic management of a group's IP that might otherwise be held in different companies or jurisdictions. If properly structured, the sale to an SPV can be without recourse so that any ultimate default in the bonds should not affect the credit strength of the group itself.

The credit crunch and recession have led to cash and credit restrictions for many companies. Many are now reviewing balance sheets and trying to use alternative assets to fund their pension commitments. Pension trustees are increasingly willing to take patents, trademarks, and copyright as security against pension liabilities, thus reducing the cash contribution required and potentially improving overall balance sheet values. In a typical structure, IP assets would be retained within the group, sometimes using limited partnerships as vehicles, isolating the IP and its income for the benefit of the company's pension fund. This benefits both the fund (which may see an immediate reduction in the pension deficit) and the company (which might see its pension contributions reduce without losing any actual assets). This structure was recently adopted by TUI Travel PLC in the U.K.

Investors in IP-backed securities should be aware of some of the risks before committing themselves. For example, who would have predicted that peer-to-peer Internet file sharing would initially have had such a significant effect on music royalty income? There is a general risk with old technology that it will become obsolete and a risk with new technology that it will be undervalued when it is securitized. Drug patent royalties may be adversely affected if the drug is the subject of lawsuits, regulatory restrictions, or withdrawal from the market. Moreover, there is no global IP law — if the assets are located or covered by rules in multiple jurisdictions, then this could increase the due diligence required and thus increase the costs of the transaction.

The ideal IP to securitize is substantial, diverse, nonvolatile, and with strong cash flows. To minimize risk, a broad range of IP income streams should be included in the SPV's asset pool.

One of the big successes is film. Copyright-protected films are a protectable, substantial IP right that may accrue strong cash flows through licensing or franchising. Music is definitely back on the agenda with the growth of mainstream music purchasing sites like iTunes and Spotify, and since music publishers have finally got the upper hand against illegal file-sharers. Sports are another popular target. The biggest growth area might be pharmaceuticals, in which manufacturers could fund the massive investment needed to develop new drugs by securitizing future license fees.

Ireland has a special tax regime designed to facilitate securitization transactions. An Irish issuer, funded wholly by debt, can hold qualifying assets in a taxneutral manner. IP income streams are qualifying assets. The underlying IP, while not itself qualifying, will either be structured to be ancillary to managing the income and thus permissible within the legislation, or else would be retained in the corporate group or in another company and thus outside the issuer.

Investors can subscribe for different series of bonds, and, most importantly for tax purposes, a subordinated bond can also be issued (typically to the sponsor) that pays out an amount equal to the profit left in the issuer after paying other bondholders and costs. The return is fully deductible if properly structured, thereby minimizing any residual corporate tax in Ireland and avoiding the need for complex deferred payment mechanisms. An issuer would typically be an orphan company with its shares held in a charitable trust and its assets held in a security trust for the benefit of the bondholders. To achieve Irish tax residence, an issuer must have a majority of Irish resident directors (typically two). However, it does not have to be incorporated in Ireland. For example, many Irish resident issuers are incorporated in the Cayman Islands, which can have company law and insolvency benefits while at the same time the tax benefits of being an Irish tax resident company.

The bonds can be listed on an exchange such as the Irish Stock Exchange. If so, interest can generally be paid free of withholding tax to investors wherever resident. However, if the bonds are not listed, the beneficial owner of the interest must be resident in an EU or tax treaty state where the interest is subject to tax and not, for example, regarded as an exempt distribution, or else be a tax-exempt entity in such a jurisdiction. Ireland has income tax treaties with 70 countries, including all the major trading economies, so this is a limited restriction on the investor base in practice. An Irish issuer is a fully taxable Irish limited company and generally entitled to the benefits of Ireland's treaty network. This gives Ireland an advantage in facilitating transactions in a mobile global asset such as IP. IP royalties payable to the Irish issuer from any country with which Ireland has an income tax treaty should benefit from the royalty article in that treaty if there were any withholding in the source country and subject to the rules of that source country.

Ireland is a particularly suitable jurisdiction to securitize U.S. IP. In this regard, the combination of a qualifying investor fund (Qualifying Investor Alternative Investment Fund, or QIAIF) with a section 110 company may be attractive and has been used in the past. A QIAIF is a regulated fund, typically taking the form of a company or unit trust that is exempt from tax on income and gains and can pay returns, free of withholding, to investors wherever resident. A QIAIF is regarded as Irish resident for purposes of the Ireland-U.S. income tax treaty, which means that as long as the requirements of the limitation on benefits article is also met, several structuring possibilities can be considered.

Ireland as an IP Hub

Ireland is a major European and global platform for a host of U.S. and other multinationals, with a particular concentration in technology, social media, and pharmaceuticals. It is also a member of the EU and OECD and the only English-speaking member of the eurozone. This gives it a unique advantage over many other competing jurisdictions. U.S. multinationals in particular have considerable experience working within the Irish legal and tax system and, equally important, Irish firms and advisers have experience with the requirements of the U.S. system.

Crucially, Ireland also has one of the best statutory frameworks for IP in the world. All the core Irish legislation regarding trademarks, patents, copyright, and related rights have been recently introduced. On the level of enforcement, Ireland has the advantage of a dedicated commercial court and IP disputes forum, which has radically reduced the time in which major IP cases are resolved, from three years on average to less than one year.

Given the sheer value of IP on company balance sheets, the opportunity exists to turn this to cash to finance and grow the business and to provide a good investment return in a low-yield environment. A significant number of IP securitizations have been completed recently, some publicly rated and others closed privately. They include securitizations of music and film royalties, trademark royalties, and patent royalties. As an EU jurisdiction with strong IP protection laws, a tried and tested securitization regime, and wide tax treaty network, Ireland is an ideal location to facilitate those transactions.