Germany: Determining A Threshold Of Operational Parameters Of A Nuclear Reactor: Technical

This case is already a few years old but relates to one of the hottest current topics: the patentability of computer simulations. The overall question was whether the purpose of the simulation and the nature of the processed data confer technical character to a method.

The determination, as a threshold value, of the value of the first operating parameter confers a technical character on the claim, this technical character exceeding the simple interaction between the numerical simulation algorithm and the computer system. The nature of the parameter is, in fact, intimately linked to the operation of a nuclear reactor, whether this parameter is actually used within a nuclear reactor or not.

This European patent application generally concerns the simulation of the operation of a nuclear reactor.

According to the description, it is desirable to operate nuclear reactors at reduced power when demand on the network is low, before reverting to nominal power, as necessary. But such use of a nuclear reactor, which would allow its capabilities to be better used, should not result in safety problems.

An objective of the invention was therefore to provide a method which allows at least one threshold value of an operational parameter of a nuclear reactor to be established, allowing the capabilities of the reactor to be better used, while maintaining safe operation of the reactor. 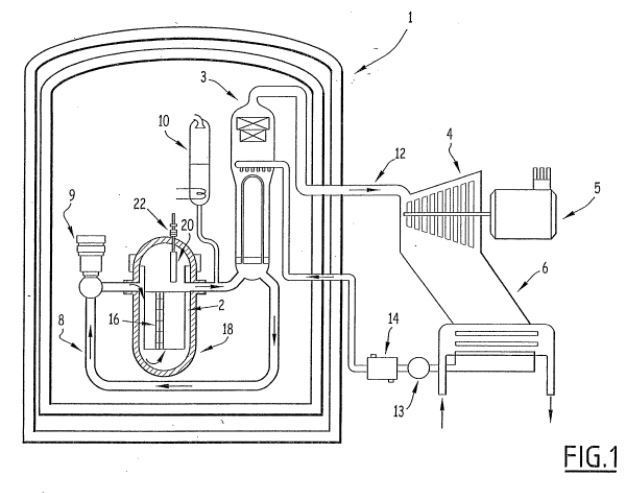 Method of determining, by a computer system, at least one threshold value (tmax) of at least one first operational parameter (t, PLIN, P, ΔI) of a nuclear reactor (1) comprising a core ( 2) in which fuel assemblies (16) are loaded, the fuel assemblies (16) comprising fuel rods (24) each comprising nuclear fuel pellets (36) and a cladding (33) surrounding the pellets (36), characterized in that it comprises the steps of:

b) simulating at least one functional transition of the nuclear reactor (2),

c) calculating the value reached by a physical quantity (σθ) during the functional transition in at least one cladding (33) of a fuel rod (24), and

d) determining, as a threshold value, the value of the first operational parameter at the moment when the value calculated in step c) corresponds to a value (σθRUP) of the physical quantity which characterizes a failure of the cladding (33).

The first-instance examining division had refused the patent application for lack of inventive step. The main argument was that the only technical feature was the computer implementation of the method, whereas the various steps of the claimed process had no effect on a technical subject, being limited to the calculation of a value.

On the appeal stage, first of all the board made clear that all of the steps of claim 1 are undoubtedly carried out by the computer system mentioned in the claim. Accordingly, patent-eligibility was no issue.

The board then went on to contrast "two approaches" in the context of inventive step with each other:

According to the "first approach", the computer-implementation was considered to be the only technical aspect of claim 1, but not the actual simulation performed by the method. The board noted that if this approach was adopted, it would have been obvious to implement the excluded method on a standard computer system (the citations are translated from the French original):

7.2.4 ... Failure to take into account the nature of the data processed or the aim pursued by the claimed method, according to the hypothesis retained above under the first approach, would then lead to the finding that the object of claim 1 of the main request is not inventive within the meaning of Article 56 EPC.

Accordingly, the board found that there would be a lack of inventive step if the nature of the processed data and the purpose of the claimed method was disregarded as non-technical.

7.3.2 ... In the present circumstances, the recognition of a technical nature linked to the use of the threshold value resulting from the simulation of an effective operation of a nuclear reactor would lead to a significantly more specific redefinition of the objective technical problem solved by the invention. Contrary to what the approach based on the sole use of technical means implies, the aspects linked to the operation of the nuclear reactor would then have a role to play in defining the objective problem to be solved. Likewise, the recognition of a technical nature inherent in the data taken into account within the framework of the simulation, would also lead to a necessary reformulation of the problem to be solved.

In the present case, the definition of the technical problem adopted by the applicant appears realistic. The invention would aim at determining at least one limit value of an operating parameter of a nuclear reactor in order to allow better use of the latter's capacities.

In the context of this approach, the board notes that none of the documents cited against the request offers the claimed solution.

Of course, the question was then which approach was the correct one. After a detailed comparison of existing case law, the board followed the approach taken in  T 1227/05:

In agreement with the appellant, the Board considers, in the present case, that the question before it is, in principle, identical to the question which arose in Board 3.5.01 in

8.4 At the end of the deliberation of the board, the latter came to the conclusion that the determination, as a threshold value, of the value of the first operating parameter conferred a technical character on the claim, this technical character exceeding the simple interaction between the numerical simulation algorithm and the computer system. The nature of the parameter thus identified is, in fact, intimately linked to the operation of a nuclear reactor, whether this parameter is actually used within a nuclear reactor or not. In doing so, the board recognizes the relevance of the analysis developed in case  T 1227/05 which it takes up for itself. Likewise, in the opinion of the board, this finding leads to retain the analysis developed above (cf. point 7) under the second possible approach and therefore to conclude that the subject of claim 1 according to the main request is inventive within the meaning of Article 56 EPC 1973.

Therefore, the appealed decision was set aside and the case was remitted to the first instance with the order to grant a patent.