In this decision, relevant for gambling machine manufacturers, the European Patent Office refused to grant a patent relating to simultaneously generating a winning outcome in game machines. Here are the practical takeaways of the decision T 0941/17 of August 11, 2021 of Technical Board of Appeal 3.4.03:

The choice of a specific game to be played is an administrative decision unrelated to any technical problems or considerations.

2.1 The claimed invention relates to a group of associated gaming devices, a method of operating them and an individual gaming device.

According to the application, it is desirable from time to time to have all the gaming devices in the group produce a winning outcome at the same time. Such an occurrence creates spontaneous enthusiasm with the players and draws attention to the gaming devices, increasing thus the chances that more users will start playing at those devices, increasing the profit of the devices' owner.

2.2 For this to happen it is important that all the gaming devices generate a winning game outcome at the same time. ...

2.3 The forced winning outcome is generated by a lottery drawer, irrespective of the game played at the machine. ...

2.4 By using synchronised clocks and identical databases and pseudo-number generators in the associated gaming devices the simultaneous occurrence of the winning outcomes in all the devices can be achieved (see pages 1 to 3 of the published application). 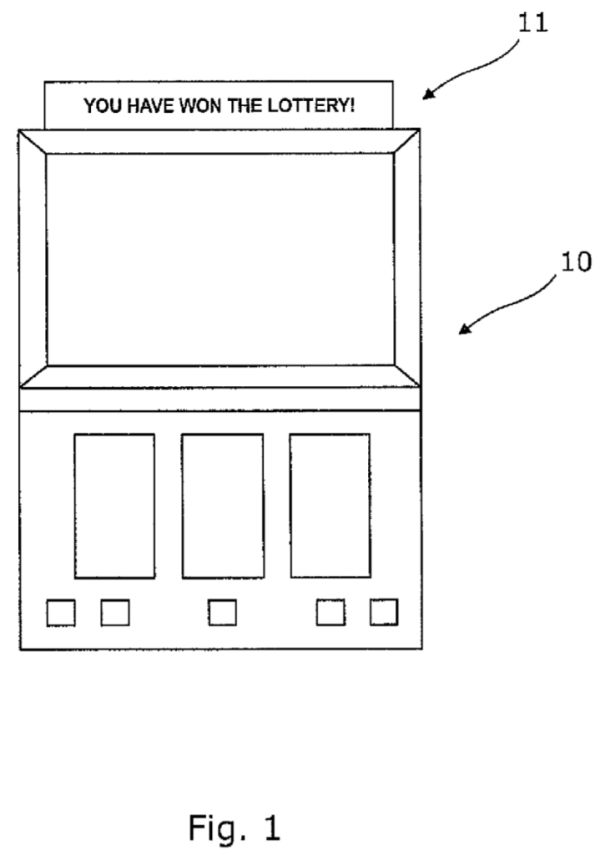 A group of associated gaming devices (10) each having a lottery drawer (25) comprising a database (18) having a plurality of entries (30, 35), each database entry (35) containing a header (36) and one or more winning numbers associated with a predetermined time interval, and

At the appeal stage, the Board in charge as a first step assessed the distinguishing features over the closest prior art identified during examination:

3.3 Comparing claim 1 with D5, the features distinguishing the claimed group of associated gaming devices from D5 appear to relate to how the forced winning game outcome is generated.

In D5 there is no information about how the winning outcome is achieved or what game it relates to.

However, the Board considered the solution provided by the distinguishing features (a lottery drawer) to be non-technical since they would only describe a lottery game:

3.4 The board considers that the use of a draw of a lottery as a way to generate a winning outcome does not address any technical problem. In the board's view, the choice of a specific game to be played is an administrative decision unrelated to any technical problems or considerations.

Against this assessment, the appellant argued as follows:

3.8 In its letter of 23 April 2021 the appellant put forward an argument related to the event list of D5. Making reference to paragraphs [0006] and [0007] of D5 the appellant argued that the event list in the gaming machines of D5 comprises a finite list of events to occur in specific points in time. When the point in time of the last event in the list is reached, the event list must be replaced.

The use of draw of lottery in the claim, thus solved the technical problem of making the event list of D5 reusable so that the present event list need not be replaced by a new event list when its end is reached.

In response, the Board in charge explained that this line of argumentation would not relate to the claimed invention since the claim would only specify how a winning event is generated on the plurality of game devices at the same time and would thus be silent about reusing an event list. Furthermore, the arguments of the appellant would be technically incorrect:

Secondly, even if the appellant's argument is taken into account, the board notes that it is not correct that the sequential entries (30) do not define fixed points in time. As it is explained in the application (see page 4, lines 17 to 21), the sequential entries (30) correspond to a predetermined time interval, like 24 hours, and with the setting of a first date for the first entry, they correspond to specific dates (see also Figure 3). Each entry 30 comprises a list of winning numbers to be drawn on the specific date (time interval).

Sine the additional features added to claim 1 according to the auxiliary requests were considered to be disclosed by the closest prior art document, the Board dismissed the appeal due to lack of inventive step.

ARTICLE TAGS
Germany Intellectual Property Patent Media, Telecoms, IT, Entertainment Gaming
POPULAR ARTICLES ON: Media, Telecoms, IT, Entertainment from Germany
The Incoming Digital Services Act
Preiskel & Co
In this article, we describe the main features of the incoming DSA and briefly analyse its interaction with the e-Commerce Directive in relation to the liability of online intermediaries.
Discrimination In Sport: What Progress Has Been Made And What Is Being Done?
Norton Rose Fulbright
In August 2022, Premier League captains announced that, ahead of the new season, they would no longer routinely take the knee ahead of each match, opting instead to use the anti-discrimination gesture...
Gordon Ramsay's Gin Ad Censured For Making Nutrition Claims. But He's In Good Company...
Global Advertising Lawyers Alliance (GALA)
Oh, to have been a fly on the wall when someone had to tell Gordon Ramsay that the ad for his branded gin had been banned by the Advertising Standards Authority.
Schlussanträge Von Generalanwalt Szpunar Zur Tätigkeit Eines Satellitenbouquetanbieters – Sendestaatprinzip Bestätigt
Dorda Rechtsanwälte GmbH
Beim digitalen Fernsehen werden urheberrechtlich geschützte Werke in Form von Video- und Audiosignalen an das betreffende Publikum im Empfangsbereich der Programme übermittelt. Dies erfolgt häufig via ...
Sports Q&A: What Is A DAO And How Are They Relevant To Sport?
Lewis Silkin
Decentralised Autonomous Organisations (DAOs) are a creature of Web3. The theory goes that they are membership-led bodies, which can operate as decentralised corporations in the digital...
DOT COM Disclosures And Dark Patterns
McDermott Will & Emery
The Federal Trade Commission (FTC) is considering updating and reissuing its guidance document on digital advertising, with the aim of tightening legislation against online consumer manipulation.
FREE News Alerts
Sign Up for our free News Alerts - All the latest articles on your chosen topics condensed into a free bi-weekly email.
Register For News Alerts
Article Tags
Germany Intellectual Property Patent Media, Telecoms, IT, Entertainment Gaming
Related Articles
Kassel Local Court: Confirmation Email In Double Opt-in Process Not Spam Reed Smith (Worldwide)
Frankfurt Court Of Appeals: The Receipt Of Free E-books May Trigger An Obligation For Influencers To Label Their Posts As Advertising Reed Smith (Worldwide)
Für Eine Posi­tive Soziale Medi­en­ord­nung Morrison & Foerster LLP
Düsseldorf Regional Court On Unfair E-mail Advertising Of Broker Services Oppenhoff & Partner
Public Value Content Selected – (How) Will It Be Privileged? Morrison & Foerster LLP
Mondaq Webinars
Employer Responsibilities and Employee Rights in Australia
People + Culture Strategies
Future Series: Managing the Risks of ESG Reporting and Compliance for In-House Counsel and Executives
Bennett Jones LLP
More Webinars
Comparative Guides
Anti-Corruption & Bribery
Banking Regulation
Cartels
Cybersecurity
Data Privacy
More Guides
Mondaq Advice Centres
Global
Trademarks in SAARC Countries
More MACs