Chinese New Year (CNY), also known as the Spring Festival or Lunar New Year, is the most anticipated and celebrated festival in the Chinese calendar, but for businesses this can often be a disruptive time that requires advance planning and strategy.

The festival is not only the most important holiday in mainland China, Hong Kong, and Taiwan, but is also influential in areas with major Chinese diasporas, such as Singapore. Several other Asian countries, including South Korea and Vietnam, celebrate their own lunar new year holidays as well.

The date of the festival is dictated by the Chinese lunisolar calendar and can therefore fall anywhere between January 21 and February 20. This year, the transition from the year of the pig to the year of the rat will begin on January 25, though preparations begin in the week leading up to that date, if not earlier.

The celebrations officially culminate on the 15th day of the festivities, with an event known as the Lantern Festival. However, normal business will typically resume by day eight – an auspicious number in Chinese culture.

As China's influence on the international stage grows in prominence, the festival now has an ever-larger effect internationally – particularly for those doing business in, or with, China.

This year's CNY will commence on the earliest date since 2012, bringing bigger challenges to the transport system as the return trips of college students is set to overlap with the holiday travel rush.

It is therefore imperative to be aware of the effects of what is essentially a nationwide shutdown, particularly with regards to making orders and payments, supply chains, and business travel.

Chinese New Year is predicated on the ideas of 'reunion' and 'togetherness.' These core ideas trigger one of the largest human migrations in the world, as hundreds of millions of people stop working and suddenly flood China's roads and public transportation networks to make their journey back to their hometowns to bring in the New Year with their families.

According to National Development and Reform Commission, it is expected that 2.99 billion trips will be made over the 2020 CNY period, a slightly increase from the previous year. Among these trips, 2.43 billion will be taken by road, down 1.2 percent from the previous year; 440 million via the railway, up eight percent; 79 million by civil aviation, up 8.4 percent, and 45 million via water transport, up 9.6 percent.

As a major entry and exit point for workers and travelers, China's first-tier cities like Shanghai and Beijing will experience mass floods of migration. These cities are heavily populated by workers from different provinces who will look to travel home during this period; they are also favored by domestic and international travelers and experience a surge of inbound tourism – especially between the third and fifth day of the CNY festival.

Shanghai, in particular, has grown in popularity since the introduction of the 144-hour visa policy, as many international travelers now opt to travel there to take advantage of this visa. The city was ranked ninth for 2019 CNY's popular domestic travel destinations with an average spending of RMB 2,571 (US$383) per person for group tours, according to Ctrip's CNY Prediction Report.

Wendy Min, Senior International PR Communications Manager at Ctrip, observed that in 2019, "there was a rise of travelers from second and third tier cities, often called 'new-first-tier-cities', which now show a greater interest in both domestic and outbound travel in 2019." She explained that "this was consistent with a greater trend indicating that Chinese people now are more willing to spend more time and money on travel."

In light of China's travel trends, it is generally best to avoid traveling in China for business during, or around the Chinese New Year period, if possible, as mass migration and extended business closures mean that this period is simply not conducive to getting much done.

In addition, Chinese New Year is seen as a time for Chinese people to return home and spend time with family and not many people will be taking meetings or attending work during this time.

Still, if a visit to China around this time of year is imperative, travelers should take precautions to ensure that travel and accommodation arrangements are made well in advance.

China is well accustomed to the travel rush that occurs over the CNY period, and usually begins preparing for the CNY travel rush in December, with departments such as the Ministry of Transport announcing special measures to be taken during this period.

It can often be difficult to get around China during Chinese New Year, as certain days will be concentrated with high levels of migration, while other days will see streets completely empty and all businesses temporarily closed.

Many factories, businesses, banks, and schools will be closed leading up to the festival. The business implications of Chinese New Year do not end on the eighth day of the holiday. While the festival comes to a close, it often takes some time for things to fully return to normal again.

Here is a simplified guide to assist you during this period. 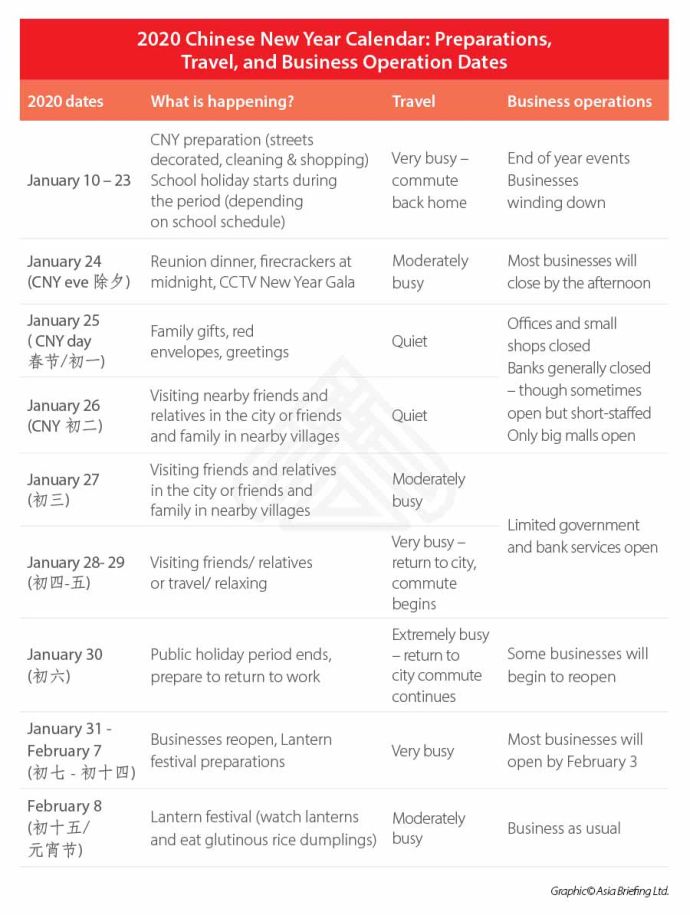 It is important to be aware that the effects of Chinese New Year will be felt long before January 25 as firms will begin to wind down their business a week or so prior to the first day of the festival.

In order to ensure that business operations are not adversely affected, inventory managers should ensure they obtain a detailed schedule of opening and closing dates well in advance of the Chinese New Year and order enough stock to see their business through the holiday period.

Foreign companies should also bear in mind that the Lunar New Year public holiday is one of the year's biggest shopping festivals, comparable to the Christmas season in many overseas markets.

Riccardo Benussi, Deputy Regional Manager at Dezan Shira & Associates comments, "In the days and weeks leading up to the New Year, Chinese shoppers will rush to online and offline points of sale to purchase gifts for loved ones as well as delicious foods and drinks to great guests at their homes."

In many consumer goods industries, businesses achieve their highest sales figures around the Lunar New Year.

"Foreign companies should prepare for a surge in demand at this time of the year, and appropriately stock up their China warehouses to ensure the rise in consumption is met in a timely and orderly fashion," Benussi explains.

Meanwhile, as pre-festival production is increased to fill the 'new year gap', and pressure on suppliers rise, the quality of products can often suffer.

Issues in product quality control can sometimes spillover after the holiday period as high employee turnover requires new workers to be found and trained to replace those that didn't return – meaning that delays are also possible.

To avoid this, it is advisable to increase monitoring and communication in the months leading up to, and after, the holidays in order to minimize any potential lapses.

Similar bottlenecks can occur in the shipping or logistics industries, so it is important to ensure that shipments are booked and at port well in advance of the shipment date.

Most Chinese port areas will be closed completely or will be operating at a limited capacity, so they are best avoided as much as possible at this time. During this period of the year, most aspects of Chinese logistics are faced with a staff shortage as people return home, and thus transporting goods can also become significantly more expensive.

To add to these difficulties, during the week-long holiday no payments can be processed to and from China or Hong Kong. Often the most suitable course of action is to settle all payments before Chinese New Year, to avoid any potential problems with late payment fees.

Communicating with suppliers and planning ahead will go a long way to ensuring that effects on cash flow are minimized as far as possible.

Red packets, or 'hongbao' in Mandarin and 'lai see' in Cantonese, are commonly given during the Chinese New Year Period. The significance of these red packets are the red envelopes themselves, which are seen to symbolize energy, happiness, and good luck. Therefore, when a red envelope is given, this is seen as sending good wishes, happiness, and luck to the receiver.

Traditionally, if you have started earning an income, you should be giving red packets to close family members that are unmarried and younger than you or retirees. However, this is a general rule only, and there is no hard-and-fast rule on who to give a red packet to as well as how much to give.

Any company doing business in China should be prepared to adopt local practices over this festive period.

Chinese New Year is a significant time of the year for not only individuals and families, but also businesses in China, as it is often a time to re-group, re-strategize and re-staff for the upcoming year.

Planning in advance for this festival can help set your company apart from the rest, reducing significant problems in supply chain and logistics, while also maximizing opportunities that the festival can bring to your business.

(This article was originally published on January 30, 2019. It has been updated to reflect the CNY 2020 calendar and relevant regulatory information.)