Beijing IP Court has recently published a decision about the infringement of copyright of the reproduction of the storyline and composition layout of three volumes of picture books written by Maurice Willems (Pen Name Mo Willems).

In 2015, Fudan Press has published three volumes of disputed books with signature of "Drawing and Editing by Nasreddin Co., Ltd." which is also written in a conversational style. These books are about two cartoon characters, Nasreddin and his donkey.

Nasreddin is a fictional character and its stories are told in a wide variety of regions since the twelfth century. Nasreddin Co., Ltd. is an animation company registered in Shanghai. However, the contents in the disputed books edited by Nasreddin Co., Ltd. are not about the legendary Nasreddin, but is the Chinese translation of Mr. Willems' picture books. Thus, this is not a case in which it is alleged that a book is duplicated, the case is rather that aspect of the plot, storyline and composition layout.

The three disputed points of this case are:

For the first point, both China and the US are members of "Berne Convention" and "TRIPS Agreement" which includes the principle of national treatment, and thus as an American citizen, Mr. Willems has the right to request to use Chinese copyright law to protect his rights in China.

As for determining the prior copyright of Mr. Willems, the court held that a work can be protected by copyright law when its expression has a high level of originality. The Court concluded that the drawing and writing in the disputed books complement each other to tell different storylines. Such expressions shows the author's unique creative judgment and choice, and the possibility of reproduction in tangible form. In the absence of evidence to the contrary, the court found that the books to which Mr. Willems claimed rights are works should be protectable by Chinese Copyright Law.

For the second point, the general principle for determining copyright infringement is "possibility of contact + substantial similarity" which should also be adopted by the Court for this case. For the possibility of contact, the corresponding Chinese version of books "There is a bird on your head", and "Today I will fly" are published in China in 2019 which is earlier than the published date of the disputed book. As for the book "We are in a book", although it was published in China later than the date of the disputed book, it enjoys a high reputation because the book has been Awarded Geisel Honor in year 2011, and has been reported in various media in China before 2015, and its corresponding Chinese Version was published in Taiwan in 2012. Additionally, Nasreddin Co. is a practitioner in the animation industry which is closely related to the picture book industry.

For the substantial similarity part, the court has found that although the animation characters in the two book series are different, the covers, front and back ring liners, title pages and the composition layouts of the main text, the character's expressions, actions, dialogues, the storylines expressed through the character's image and dialogue are almost identical, and even the book page numbers of both series can correspond to each other. The infringing book is only the translation of the dialogue in Mr. Willems's book.

Thus, the breach of copyright is confirmed.

As for the third point, Mr. Willems claims statutory compensation of 500,000 yuan. The Court held that the way of calculating compensation for damages stipulated in the Copyright Law is in order. The first is the plaintiff's loss, and the second is the defendant's profit. When both are uncertain, legal compensation can be applied. During the examination, Mr. Willems did not provide evidence to prove its actual loss. The sales evidence submitted by Nasreddin Co. and Fudan Press was inconsistent and do not correspond. Therefore, under the existing evidence, the calculation method of compensation for the defendant's profit order could not be applied in this case. In this case, statutory compensation should be applied.

Then, after taking into consideration the reputation of Mr. Willems and his works, the originality of disputed picture books, the print runs, pricing and reader reviews of the Chinese version of Mr. Willems' books, degree of plagiarism, the pricing and the sales price and sales volume of Dangdang.com; etc, the Court held that Nasreddin Co. and Fudan Press should jointly compensate Mr. Willems 200,000 yuan. 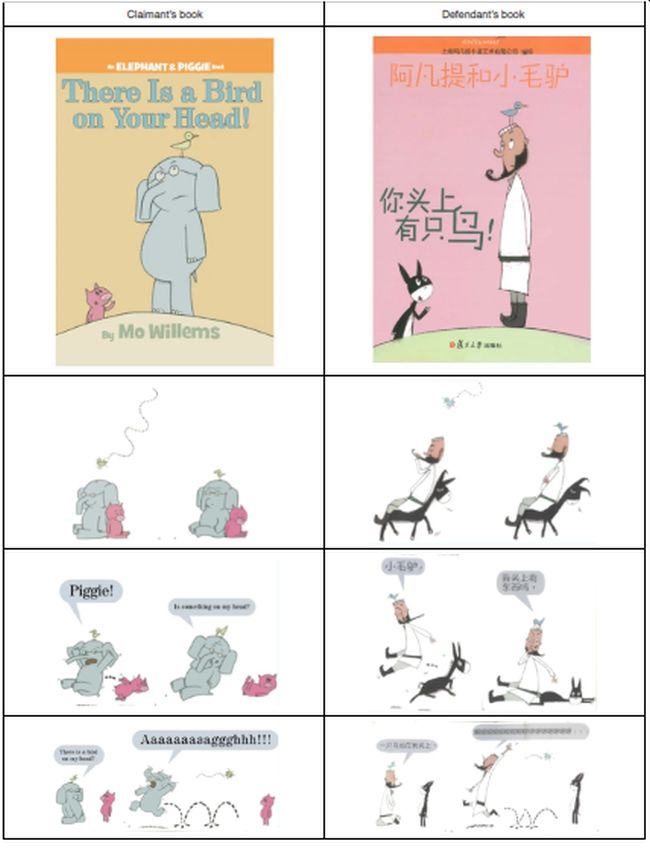 ARTICLE TAGS
China Intellectual Property Copyright
POPULAR ARTICLES ON: Intellectual Property from China
Patent Infringements And Their Types
S&A Law Offices
Patent is one of the most important forms of Intellectual Property (IP). The term of a patent is typically 20 years from the Priority date of the application.
Internet And The Determination Of Jurisdiction In The Case Of Trade Mark Infringement
S.S. Rana & Co. Advocates
Internet has marked its presence in the commercial world in an unprecedented way. With businesses moving online to escalate their accessibility to a wider range of customers in the market, ...
Assignment And Licensing Of Copyright
S&A Law Offices
Copyright is a protection given to the creators of certain types of works as an acknowledgment to their intellectual input
A Study On: Novartis AG v. Union Of India
Khurana and Khurana
Intellectual property is an intangible form of property while a ‘Patent' is a subset of intellectual property.
Trademarks Comparative Guide
Obhan & Associates
Trademarks Comparative Guide for the jurisdiction of India, check out our comparative guides section to compare across multiple countries
Guangdong First In Country To Have Local GI Protection Act
AFD China
One big quality of the Regulation is building a GI protection system that seamlessly links with relevant national rules.
FREE News Alerts
Sign Up for our free News Alerts - All the latest articles on your chosen topics condensed into a free bi-weekly email.
Register For News Alerts
Article Tags
China Intellectual Property Copyright
Related Articles
意大利新增商标撤销和无效的行政程序 CCPIT Patent & Trademark Law Office
CNIPA Is Soliciting Public Opinions On The Draft Revision To The China Trademark Law CCPIT Patent & Trademark Law Office
CNIPA: Patent Infringement In China Is At A Historically Low Level AFD China
China National Knowledge Infrastructure Fined For Monopolistic Behavior AFD China
SPC: Parents Of Hybrid Varieties May Be Protected As Trade Secrets AFD China
Mondaq Webinars
Malta as an e-Money and Payment Services Centre
GVZH Advocates
Considering the Nigerian Start-Up Act & The Opportunities for Tech
Oake Legal
More Webinars
Comparative Guides
Franchising
International Arbitration
Patents
Trademarks
More Guides
Mondaq Advice Centres
Global
Trademarks in SAARC Countries
More MACs
Upcoming Events
Mondaq Social Media