Brazil: Brazil Becomes The 79th State Party To The United Nations Convention On Contracts For The International Sales Of Goods

by Anelize Aguiar
DLA Piper
Your LinkedIn Connections
with the authors
To print this article, all you need is to be registered or login on Mondaq.com.

On March 4, 2013, Brazil acceded to the United Nations Convention on Contracts for the International Sale of Goods ("CISG" or "Convention") and became its 79th Contracting State. Brazil's accession to the CISG is a major step towards harmonization of rules applicable to import and export transactions involving Brazilian parties, and will bring more certainty with respect to the law applicable to contracts, reduce transaction costs and allow parties to better manage their risks. The CISG will enter into force in Brazil on April 1, 2014 pursuant to Article 99(2) of the Convention. Therefore, after April 1, 2014, international trade transactions with Brazil will be more straightforward.

The CISG is recognized as the most relevant treaty governing international contracts for the sale of goods. It represents the joint effort of several countries over more than fifty years to harmonize international sales laws. The Convention governs the formation of contracts, the obligations of the buyer and seller and remedies for breach of contract.

Since its adoption, the CISG has been considered a landmark in the international unification process, and has influenced many legislative reforms on international, regional, and domestic levels. For instance, the CISG served as a model for the UNIDROIT Principles of International Commercial Contracts (PICC), the Principles of European Contract Law (PECL), the Uniform Act Relating to General Commercial Law of the Organization for the Harmonization of Business Law in Africa (OHADA), and the domestic sales of goods acts from Finland, Norway, Sweden, and China.

Additional information on the CISG is available at www.uncitral.org.

Benefits of Brazil's Accession to the CISG

With a Gross Domestic Product (GDP) of US$2.425 trillion in 2012, Brazil is the world's seventh-largest economy and the largest economy in Latin America. In 2012, Brazil exported US$242.58 billion and imported US$223.14 billion. Brazil's main trading partners include the US, China, Argentina, Netherlands, Germany, Japan and Canada, which are all CISG Contracting States.

Before Brazil's accession to the CISG, there was significant uncertainty with respect to the law applicable to international trade transactions involving Brazilian parties. Since Brazil is among the few countries that do not fully respect the party's right to choose the law applicable to their contracts, the determination of the governing law would only be made in a potential lawsuit, by a judge, according to Conflicts of Laws rules of the forum. International contracts for the sale of goods perfected with Brazilian parties would potentially be subject to one of three different legal regimes: the Brazilian domestic sales law, the other party's State domestic sales law and the CISG.

Taking into account the possible differences among these regimes, uncertainty as to the applicable law leads to uncertainty as to the outcome in the event of a lawsuit. If the governing law and the outcome in a future lawsuit are uncertain, parties will want to include in their agreements provisions regulating all the possible scenarios. which in turn results in higher transaction costs. Transaction costs are costs incurred by the parties during the negotiation phase in order to manage their risks and come to an acceptable agreement.

After April 1, 2014, when Brazil's accession to the CISG becomes effective, there will be no uncertainty with respect to the law applicable to contracts between Brazilian parties and parties from other Contracting States because the Convention will always govern, subject to the parties' right to opt out of the CISG under Article 6 of the Convention. Consequently, in these situations, transaction costs will be reduced.

The chart below illustrates the situations in which the CISG will be applied to transactions involving parties from Brazil after April 1, 2014: 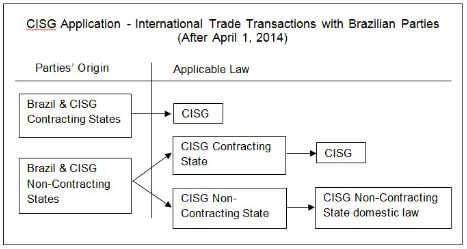 The fact that Brazil's ratification of the CISG would prevent the Brazilian domestic sales law from regulating the parties' affairs does not mean that Brazilian parties are at a disadvantage. It is true that Brazilian businesspersons and their lawyers will have to get acquainted with the CISG rules, which may increase transaction costs after ratification; however, in the long run, these costs may decrease or become non-existent. In fact, Brazilian parties would benefit from the application of the CISG to their international commercial contracts, since it is a more modern and adequate rule to current international trade transactions than the Brazilian domestic sales law. Moreover, the CISG would only be applicable to international transactions; thus, domestic contracts for the sale of goods would continue to be regulated by the Brazilian 2002 Civil Code.

After April 1, 2014, there will be more certainty with respect to the law applicable to international contracts for the sale of goods with Brazilian parties because the CISG will govern all transactions between Brazilian parties and parties from other CISG Contracting States. The CISG may also govern transactions involving Brazilian parties and parties from CISG Non-Contracting States depending on the Conflict of Laws rules of the forum. In any event, if the Convention is not the desirable applicable law, the parties can opt out of its provisions by amending their agreements and expressly excluding the CISG as the governing law.