Australia: When reporting on a crime, picture the right person

The host of Media Watch, Paul Barry reaffirms the importance of fact-checking your news stories, especially when publishing a picture of a person responsible for a crime.

Shane Wyrzynski, the wrongly pictured man, wants to pursue the tabloid paper for defamation. He told Media Watch he wants a front-page apology and compensation.

A defamation expert told Barry his chances were good, pointing to the recent O'Brien Criminal & Civil Solicitor case where a man was wrongly identified as the kidnapper of Cleo Smith.

This is a case in which our lawyers were able to obtain a successful outcome for the defamed person. O'Brien Criminal & Civil Solicitors were engaged by Mr. Terrance Kelly aka Flowers and his family to represent him in a defamation claim against the Seven Network. 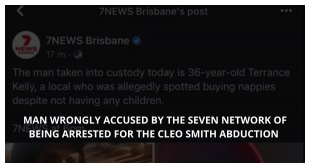 On 3 November 2021 the Seven Network published a story on multiple platforms that featured clear full-face images of Mr. Kelly/Flowers and his full name, identifying him as the man accused of abducting Cleo Smith. However, the man that police actually charged is Carnarvon man Terence Darrell Kelly.

Notably, this is not the first case O'Brien Criminal & Civil Solicitors have done where media have wrongly used the images of innocent persons in a story.

Isaac's* picture featured in an article about a violent assault on a group of teenage girls. He had no involvement in any way in the incident. The media organisation incorrectly identified and pulled his picture from Facebook.

Immediately beneath the headline and visible in both the Facebook and Twitter posts was a clear image of Isaac's face next to a screenshot of footage of the violent assault.

Many people viewed and shared the article numerous times on various platforms. It remained online for at least 18 hours. Various other online news sites also picked up and repeated it.

As a result of the publication, Isaac received numerous messages and phone calls from family, friends and acquaintances asking if had involvement in the violent attack. Various "Facebook sleuths" somehow managed to use the photo to find family members of Isaac on Facebook. Those family members received threatening messages directed at them and Isaac.

O'Brien Criminal & Civil Solicitors sent the media company a Concerns Notice seeking a settlement before we had to file the matter in Court. In conclusion, we successfully negotiated a confidential settlement.