by Lucy Halse (Chicago)
Envoy Global, Inc.
Your LinkedIn Connections
with the authors

U.S. employers largely support the current administration's handling of employment-based immigration, with 70% of respondents in our survey stating approval and just 23% stating disapproval.

Even so, employers are seeking alternatives outside the U.S. to hire and retain foreign talent because of outstanding issues with the U.S. immigration system.

"The lack of significant reform to the immigration system continues to stifle employers."

What Immigration Reforms are Most Important?

Employers surveyed in the 2022 Immigration Trends Report said that they would like to see various reforms to the U.S. immigration system. Their top three reforms are:

In the past few years, more government agencies have digitized their immigration processes, which has helped to reduce application wait and processing times. One of the biggest changes in that respect was the government's implementation of the H-1B electronic registration system. A clear majority of respondents (77%) prefer the current system compared to the prior method of submission.

Respondents prefer the H-1B electronic registration system because it has made the H-1B cap process simpler, saved their companies money and allowed them to submit more employees into the lottery.

While employers like the H-1B electronic registration system, they hope for even more changes to the immigration system.

Removing or raising quotas for non-immigrant visas and removing country caps for green cards ranked high on employers' wish list for reforms. Most respondents surveyed (91%) want to see an increase in the number of non-immigrant visas available each year. The same percentage hope to see a reform in the green card process by either removing per-country caps or increasing the total number of green cards available every year. 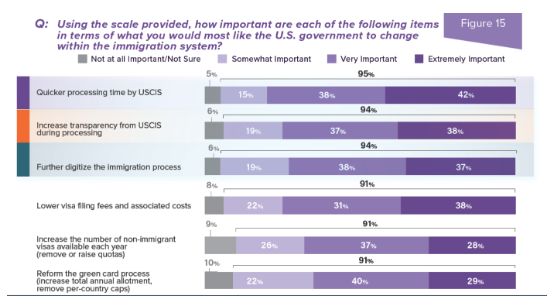 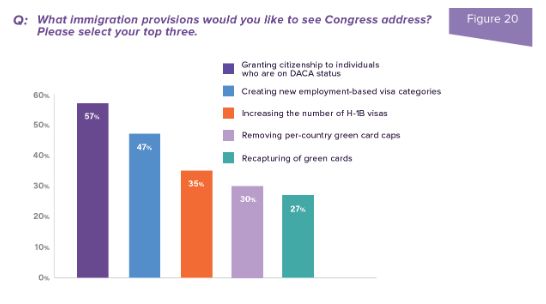 Visa processing delays are causing about 25% of respondents to lose prospective candidates. Respondents are also increasing their staff and/or budgets to deal with the challenges of the U.S. immigration system. About 24% are pursuing advocacy efforts to identify and propose solutions for the U.S. immigration system that may positively impact their hiring and retention strategies.

Due to challenges in the country's immigration system, about 19% of respondents said that they are hiring fewer foreign nationals. 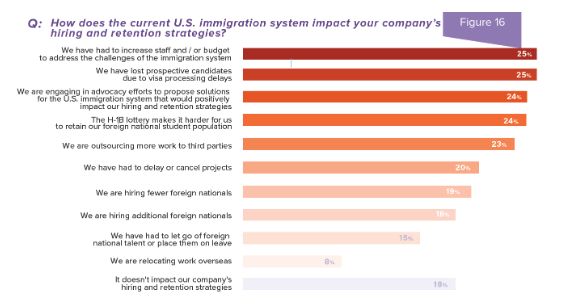 While employers generally approve of the employment-based immigration system in 2022, they also feel that there is more work to be done to help fill open jobs with high skilled foreign talent.

From raising quotas on the H-1B and other visas, to further digitizing government processes, employers voiced their main concerns and wish list of items on many immigration issues. Read the full 2022 Immigration Trends Report to dive deeper into immigration trends.