If all you know about Uruguay is Luis Suarez, the (in)famous footballer, then this article is for you. If you do not even know who Luis Suarez is, then hopefully it is still for you.

Over the course of 2017, we'll write about a range of specific legal areas in Uruguay. But in this first article, we'll take the opportunity to provide a general introduction to Uruguay itself.

We hope this series of articles will be of interest to anybody who is looking at South America to start up a business, is looking at investment opportunities in general, or is seeking to start a new life abroad.

While many have found opportunities for success in Uruguay, it will not suit everybody. The hope is these articles will encourage you to check it out further. And perhaps for others, it will help them realize that this is not the country for them.

We know in some places, Uruguay is referred to as the "Switzerland of South America." But we would say at the outset that Uruguay is nothing at all like Switzerland. We do however have some good points that even Switzerland does not!

So, to answer a common first question: where is Uruguay? We are a small country between Brasil and Argentina on the Atlantic coast of South America.

However, "small" is a relative term. Uruguay's land area is the same size as the UK. But instead of having a population of around 65 million, we have only 3 million. That means there is a lot of open space and not so many traffic jams.

In Uruguay, we do not get earthquakes, hurricanes or tsunamis. It's a peaceful food-producing country far away from the world's current hot spots. The biggest danger to your health here is bad driving.

The countryside consists of mostly fertile farmland and rolling hills.

The coastline is a string of sandy beaches all the way up to the border with Brasil. During the summer, these beaches and their seaside resorts are very popular with Argentinians and Brasilians – and are becoming increasingly popular with Europeans. 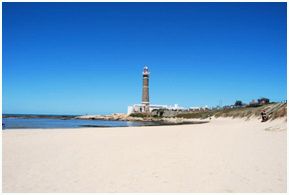 A view of the beach and lighthouse at Jose Ignacio, Maldonado.

Political system and the economy:

Uruguay has a long history of democracy, which sets it apart from most other countries in the region. It has also always been stable economically and never defaulted on its government debt – even when the IMF advised us to do so.

There really is a separation of powers here between the Executive, the Legislature, and the Judiciary.

We are confident in saying as well that there is no discrimination in the treatment of foreigners - either in law or, more importantly, in practice.

That doesn't mean everything is efficient. This is still South America. But it does mean that if you get a poor service, you can be confident that a native Uruguayan will be receiving the same poor service!

As to the politics, there are elections every five years for a President, and a two-house legislature.

The present government is a socialist-oriented one, called the "Frente Amplio", but whilst it is left wing, it is not loony left. The country has done rather well in the 12 years since they first came to power.

The current President is Dr. Tabare Vazquez, whose main claim to fame is that he is a practicing oncologist.

The previous president, Pepe Mujica, was well known around the world as being the "poorest" President because he gave away a large part of his presidential salary. You can agree or disagree with his policies, but he certainly does not appear to have used the role for his personal gain.

There is free public education up to 18, although standards in the public sector have unfortunately fallen. As a result Montevideo is full of private schools, many of them bilingual. Most these schools teach English, but there are also German, Italian and French schools. There is also a free public University (UDELAR) and several private ones.

Likewise there is a free public healthcare system, but whilst the standard of healthcare of such is good, the accompanying services are very poor. Most people opt for private insurance, using one of the several schemes available e.g. Blue Cross, or go direct to one of the hospital schemes. Writing as a Brit, I have to say that the best hospital here is without doubt the British Hospital!

As a conclusion, I would say that the quality of life here is very high. Family is still important – the nuclear society still exists here.

Montevideo itself has over half the population of the country but it is still relatively easy to get around. Most things are just around the corner – shops, banks and even friends.

For a relatively small city there are lots of theatres and special productions of classical music and opera. Finally, if you want more you can just cross over to Buenos Aires in Argentina, which is only 30 minutes by plane or 3 hours by ferry.

So that is a basic introduction to the country itself, which will hopefully give you some insight and will not have put you off already!

Moving on then to the legal regime we will be writing in the following months about the following specific areas: Immigration, Taxes (both corporate and individual), buying real estate and the different sorts of properties available (there are no restrictions on purchases by foreigners), starting a business, using Uruguay as a point of entry for Latin America, labour regulations, banking, wills and estate planning, duty free zones and some analysis of different businesses which have been successful in Uruguay over the last few years.

Hope you will be reading us next month!

An aerial view of the World Trade Center towers in Montevideo, with the River Plate in the background. Photo courtesy of: viajeuruguay.com