Thousands of non-U.S. citizens, from over 120 countries, are actively using U.S. laws to report serious economic crimes and corruption throughout the world. These new whistleblowers are actively using modern whistleblower qui tam or reward laws that cover violations of major anti-corruption laws such as the Foreign Corrupt Practices Act. The fact that thousands of international residents are actively participating in the U.S. whistleblower programs debunks any argument that whistleblowers are somehow unique to American culture, and laws that incentivize their disclosures should not be implemented worldwide. The opposite is true. Numerous citizens, many of which hold highly responsible positions in some of the largest multinational corporations, want to see an end to corruption, and are looking toward professional, viable, and confidential reporting structures to disclose the crimes they witness.

Today, whistleblowers play an essential role in detecting economic crimes worldwide. Based on the unprecedented success of whistleblower qui tam, or reward laws, the United States has taken the lead in enacting whistleblower laws and has taken advantage of specific rules to expand the territorial jurisdiction of these laws to maximize the transnational reach of anti-corruption laws. Strong and effective whistleblower reward laws are now applicable to most of the worldwide publicly traded economy. For example, the U.S. Foreign Corrupt Practices Act prohibits bribery of government officials to obtain a business advantage and is currently applicable to nearly every publicly traded company, regardless of whether the company trades on the Hong Kong or New York stock exchanges. Likewise, companies that extract or sell minerals from developing countries may find themselves prosecuted under the Commodity Exchange Act, even if they are privately held. Other laws now cover bank secrecy, illegal foreign accounts, money laundering, ocean pollution and violations of securities exchange laws.

The modern qui tam whistleblower laws are predicated on a very simple principle: Use monetary rewards to incentivize persons with inside information to report crimes. Whistleblowers are compensated based on the quality of information provided, and the ability of law enforcement to use that information to obtain successful prosecutions. The better the information, the larger the prosecution, the greater the financial reward. All rewards are paid directly from the collected fines.

For example, under one law alone, the False Claims Act ("FCA"), the United States has collected over $44 billion in sanctions from criminals and wrongdoers from whistleblower cases. Whistleblowers have been paid over $7 billion in rewards. In addition to the False Claims Act, the major U.S. laws that permit mandatory rewards, and which can be used internationally, are:

How do Qui Tam or Whistleblower Reward Laws Work?

Modern whistleblower laws are based on a medieval concept known as qui tam, which translates from Latin to "in the name of the King." Qui tam laws empower citizens to make reports about violations of law, assist in the prosecution of wrongdoers, and obtain a reward if their allegations are vindicated and the wrongdoer pays a sanction. On March 2, 1863 President Abraham Lincoln signed the original False Claims Act (FCA) into law. It was intended to incentivize citizens to help the federal government police rampant military contracting fraud during the U.S. Civil War. The original law went largely unused until 1986, when Congress modernized its procedures and approved major amendments. The original "Lincoln law" and its 1986 amendments are now at the model for all highly successful modern whistleblower laws.

The FCA and its prodigy are designed to empower whistleblowers who have firsthand knowledge of frauds/violations to report them to the appropriate government officials, and to incentivize the whistleblowers to work directly with government investigators, often in the capacity of a confidential informant. Persons who directly participated in the criminal activities can qualify for rewards, as these "insiders" often have the best information. However, if you "plan and initiate" the criminal activity you most likely cannot obtain compensation. To help convince "insiders" to take the risk of losing their jobs or suffering other harms that whistleblowers often face, the modern whistleblower laws set minimum and maximum reward levels. The guaranteed minimum payments, which are often in the millions of dollars, are essential for convincing otherwise skeptical potential whistleblowers to step forward.

All the modern reward laws are very similar and set mandatory minimum and maximum reward levels. Under the FCA and the tax evasion/money laundering whistleblower law, the minimum payment is 15% and maximum payment is 30% of the proceeds collected by the government. Under the Foreign Corrupt Practices Act and the Commodity and Securities Exchange Acts, whistleblowers receive awards in the range of 10%-30%. The largest ever publicly paid reward given to an individual whistleblower was $104 million as a result of reporting illegal offshore banking in Switzerland.

Each law has its own filing requirements, many of which are highly technical. Under most laws, such as the Foreign Corrupt Practices Act, potential informants are required to hire whistleblower attorneys in order to file a confidential or anonymous report. 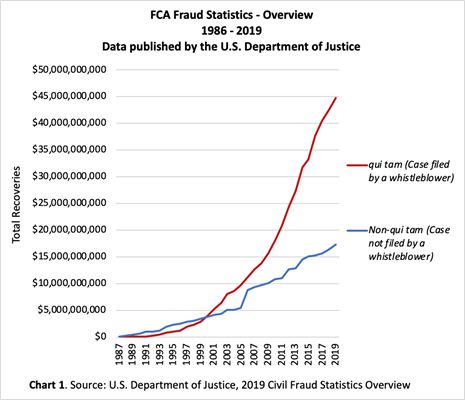 Currently, the overwhelming majority of recoveries in U.S. fraud cases are generated from whistleblower cases. In FY 2019, 72% of the fraud recoveries were triggered by whistleblower disclosures. See Chart 2.

Based on the success of the FCA qui tam law, Congress modernized other anti-corruption laws, and now has implemented reward laws covering most of the worldwide, publicly traded economy. 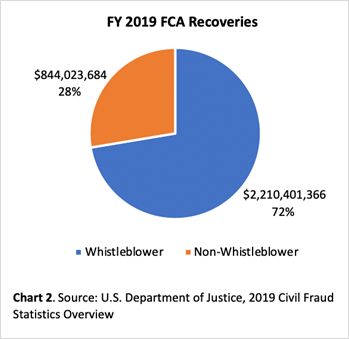 U.S. whistleblower laws are open for business worldwide. Nowhere is this more clearly expressed then in enforcement actions of the U.S. Securities and Exchange Commission ("SEC"), the federal agency with responsibility for managing the whistleblower reward provisions under the Securities Exchange Act ("SEA") and the Foreign Corrupt Practices Act ("FCPA"). In granting a $30-35 million reward to a non-U.S. citizen who provided original information resulting in a successful FCPA prosecution, the SEC ruled that:

[I]t makes no difference whether . . . the claimant was a foreign national, the claimant resides overseas, the information was submitted from overseas, or the misconduct comprising the U.S. securities law violation occurred entirely overseas. 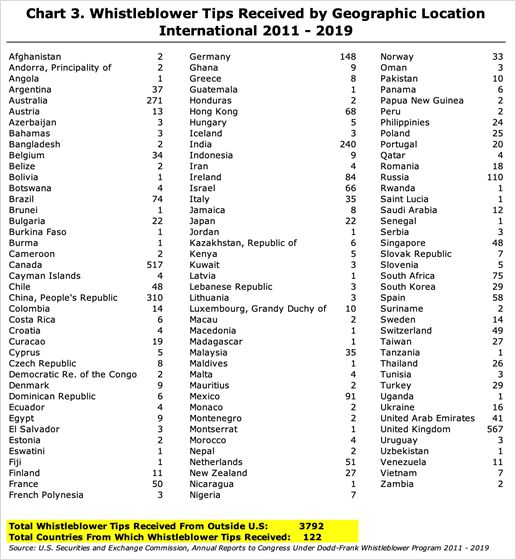 The transnational scope of the FCPA is often underestimated. The U.S. has expanded the law's jurisdictional reach to include numerous non-U.S. companies, including corporations traded on foreign stock exchanges in which U.S. citizens may invest through American Depository Receipts. Between 2016 and 2019 the United States recovered $7.66 billion in sanctions from non-U.S. companies, as compared to $1.29 billion from U.S.-based companies. See Chart 4. 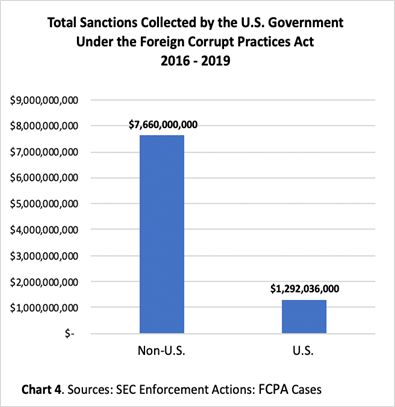 The public record unquestionably demonstrates that whistleblower reward laws work and are essential for the detection and successful prosecution of fraud and corruption. The public record is consistent with the research findings published by the University of Chicago Booth School of Business concerning how frauds are detected and punished:

Whistleblowers worldwide want to use laws that will both have an impact and will ensure that they are protected and compensated. The basic framework for successful qui tam laws are straightforward:

Given the urgent need to obtain witnesses to stop bribery, corruption, money laundering, tax evasion, securities manipulations and environmental crimes, it is vitally important for those in positions to effectively work with whistleblowers, such as prosecutors, NGOs, and law enforcement officials, to promote the use of qui tam laws as an essential component for any anti-corruption program. The U.S. laws can be used today.

Whenever a major corruption scandal is exposed by a whistleblower it is absolutely necessary to screen that case and determine whether the whistleblower may be covered under the major U.S. whistleblower reward laws, such as the Foreign Corrupt Practices Act, the False Claims Act, the Internal Revenue Act, the Securities Exchange Act and the Commodity Exchange Act. These U.S. laws have expansive extraterritorial application. However, the ability of foreign nationals to qualify for a reward under U.S. law is not widely understood. This can cause whistleblowers to lose the opportunity to obtain multi-million-dollar rewards and stifle the ability of law enforcement officials to obtain access to the evidence they need to hold fraudsters accountable.

The U.S. laws also present a model for other nations to follow. It is incumbent upon anyone with information on frauds and corruption to understand how these laws work, how they can safely report large scale economic crimes.

Stephen Kohn is a founding partner of the qui tam and whistleblower rights law firm of Kohn, Kohn & Colapinto, the Chairman of the Board of Directors of the National Whistleblower Center. He is the leading international expert on whistleblower law and was recognized by the National Law Journal as among the top plaintiff's attorneys in the United States. Mr. Kohn has represented whistleblowers for over 35 years, setting numerous landmark precedents, including winning the largest reward paid to a whistleblower ($104 million). In addition to U.S. clients, he currently represents confidential non-U.S. citizens who have reported violations of the FCPA, money laundering and bank secrecy laws, the Commodity and Security Exchange Act, False Claims Act, and the Internal Revenue Act. Mr. Kohn has also set nation-wide precedent under numerous environmental and nuclear safety laws. In addition to his law practice, Mr. Kohn is an adjunct professor at the Northeastern University School of Law, teaching an annual seminar on whistleblower law. He worked with Congress on drafting the Sarbanes-Oxley, Dodd-Frank, and Whistleblower Enhancement Act whistleblower laws. Kohn's eighth book on whistleblowing is The New Whistleblower's Handbook (Lyons Press 2017).