This time, we've reached the home stretch in our review of Justice Theis' tenure. In this post, we're reviewing the areas of law in which she's written civil majority and civil dissents. Next time, we'll be looking at the criminal side of the ledger. And once again - the data for 2021 is still partial, since we halted the collection at the same time for all seven Justices' profiles. 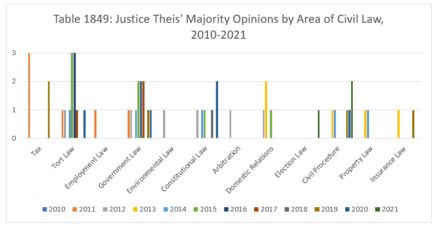 Justice Theis has written a dozen dissents in civil cases. Four were in constitutional law cases. She has written two each in tort and government and administrative law. She has written one dissent apiece in environmental, employment, election and insurance law. 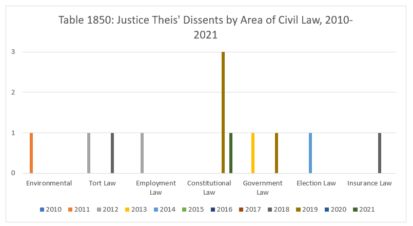 Join us back here next time as we wrap up our review of Justice Theis' tenure.