When adopting a new brand, it is important to make sure the new brand does not infringe another company's existing trademark rights. Typically, infringement occurs when there is a likelihood of confusion between the company that adopted the new trademark (the junior user) and the company that owns an existing trademark (the senior user) such that consumers believe that the junior user's mark is associated with the senior user of the mark. "Reverse confusion" arises when the junior user is so well-known that consumers are likely to mistakenly believe that the senior user is the infringer. The reverse confusion issue recently arose in the following high-profile case.

Vibes Media, LLC (the senior user) had registered a VIBES Logo, which it had used since 2011, in the field of disseminating advertising and marketing materials for others, for wireless delivery to handheld computers, laptops and mobile electronic devices. 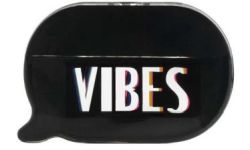 You might think that the fragrance field and the mobile marketing communications field are sufficiently unrelated, with different channels of trade and different customers, that there would be no likelihood of confusion regardless of the similarity of the word marks and logos. However, because the Kardashians are high-profile celebrities, Vibes Media claimed that there was a high likelihood of "reverse confusion" in that consumers might mistakenly believe that Vibes Media copied the Kardashian logo.

This case was recently dismissed following settlement. It shows that, in adopting a new fashion brand or logo, particularly for use in association with a celebrity, you should be careful to avoid the potential risk of incurring expenses to defend against a claim of reverse confusion with a similar word mark or logo already in use, even if the existing mark is used in an unrelated field.

In a recent case, an apparel company succeeded in overcoming a refusal relating to its use of the word ANAHEIM as part of its trademark.

Red Flags Fly, Inc., located in Los Angeles, California, applied to register a mark consisting of the words ANAHEIM HILLBILLIES in stylized gothic lettering for various articles of clothing. The Examining Attorney refused registration of the mark on the ground that ANAHEIM was primarily geographically descriptive and must be disclaimed. The applicant appealed to the Trademark Trial and Appeal Board (TTAB), which reversed the refusal.

The TTAB held that the record did not show that the applicant's goods originated from Anaheim, California, even though the record did show that the applicant was located in Anaheim. Furthermore, the TTAB found that the juxtaposition of ANAHEIM (a city) with HILLBILLIES (people who live in the countryside) created an incongruity rendering the mark unitary in that the two words should be considered together as a single term. The gothic stylization in the mark also was found to create still another point of irony. Therefore, the TTAB held that the ANAHEIM portion of the mark was not primarily geographically descriptive and reversed the disclaimer requirement.

This case shows that, even if your company is based in the location used in your mark, the mark may not be primarily geographically descriptive if your goods or services do not originate from that location. The case also shows that the combination of a geographic term with another term, and perhaps even unique stylization, in some circumstances may result in a distinctive unitary mark.

Author's Note: A mark that is, in fact, primarily geographically descriptive still may be registrable after the mark has become distinctive through use and advertising as an indicator of source of the goods or services (also known as acquiring "secondary meaning"). However, if the goods or services do not originate from the location but consumers are likely to believe otherwise and this would be a material factor in a significant portion of the relevant consumers' decision to purchase the goods or use the services, the mark may be considered to be "primarily geographically deceptively misdescriptive." Such a mark cannot be registered under any circumstances.

ARTICLE TAGS
United States Intellectual Property Trademark Media, Telecoms, IT, Entertainment Advertising, Marketing & Branding
POPULAR ARTICLES ON: Intellectual Property from United States
Fair Use And Fanatic Fans
Global Advertising Lawyers Alliance (GALA)
While my seats afforded me only a so-so sight-line to the stage, I had no trouble seeing the ocean of cell phones, in the hands of adoring fans, simultaneously recording (without authorization)...
Demand Letters: Overview Of Risks And Strategic Considerations For Trademark Holders
Haug Partners
In the event of potential infringement, an intellectual property attorney will generally consider sending a demand letter to put the potential infringer
No Trademark Protection In Book Or Movie Titles?!?
Weintraub Tobin Chediak Coleman Grodin Law Corporation
Generally, the title to a single motion picture is not entitled to trademark protection. This is the same for the title to single books, songs and other singular creative works
Trade Secrets 2019 Litigation Roundup And 2020 Trends
Gibson, Dunn & Crutcher
Gibson Dunn & Crutcher LLP attorneys, in Part 1 of a two-part series, highlight 2019 developments in trade secret litigation and say 2020 will see similar trends.
File When Ready! Criteria For Determining If An Invention Should Be Patented
Harness, Dickey & Pierce, P.L.C.
It may come as a surprise that even patent attorneys don't believe every invention should be patented.
Coping When Your Brand Name Becomes Mud
Cowan Liebowitz & Latman PC
What can you do to protect your goodwill if you unknowingly select an unfortunate brand name, or through no fault of your own...
FREE News Alerts
Sign Up for our free News Alerts - All the latest articles on your chosen topics condensed into a free bi-weekly email.
Register For News Alerts
Article Tags
United States Intellectual Property Trademark Media, Telecoms, IT, Entertainment Advertising, Marketing & Branding
Related Articles
Key Takeaways From MWE International Seminar Intellectual Property Session – January 2020 McDermott Will & Emery
2019 IP Law Year In Review: European Issues McDermott Will & Emery
IPR Institution Limited By The Petition, But Not Limited As To The Express Teachings Of The Prior Art McDermott Will & Emery
Texas Appeals Court Rules Private Communications With Customers Not Protected Free Speech McDermott Will & Emery
PTAB May Not Cancel Indefinite Claims In IPR, No Matter What McDermott Will & Emery
Comparative Guides
Anti-Corruption & Bribery
Cartels
Enforcement of Foreign Judgments
International Arbitration
Merger Control
Mondaq Advice Centres
United States
Advertising and Marketing
United States
Telemarketing
Global
Trademarks in SAARC Countries
Global
Investment Immigration
More MACs