by HLK  (Bristol)
HLK
Your LinkedIn Connections
with the authors

Deaf Awareness Week (2nd to 8th of May) takes place annually, to promote the positivity of living with hearing loss and deafness. There are an estimated 11 million people in the UK who are deaf or hard of hearing, and 150,000 British Sign Language (BSL) users in the UK.1

In this blog, we look at some important inventions that have been developed over the years to mitigate some of the problems associated with hearing loss.

The first electric hearing aid, the "Akouphone", was created over a hundred years ago by Miller Reese Hutchinson, a prolific American inventor.2 The first iterations of the Akouphone were large and bulky, but over time the device was improved until it became portable enough to be practical for everyday use.

US710979A3 illustrates one of Hutchinson's first hearing aids. Unlike the hearing aids of today that are small enough to fit on or inside an ear, the device shown below was so large that it was "supposed to be held in the hand of the user". 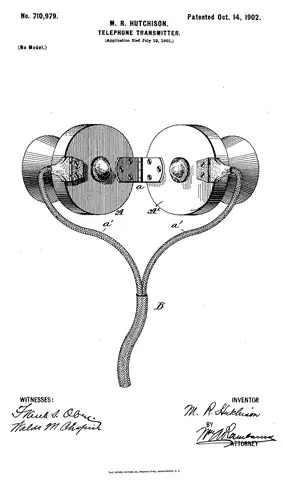 The patent describes how a user can point the two microphones (labelled A and A1) towards a source of sound. The audio would then be converted into an electrical signal and transmitted to a "telephone-receiver" via a conductor (B), where the electrical signal would be converted back into an audio signal to be heard by the user.

Hearing aids such as the akouphone are generally not suitable for users with more profound hearing loss, especially in cases where the hearing loss stems from damage to the inner ear. In such cases, an implant may be used to completely bypass a damaged portion of the ear.

The cochlear implant, arguably the most well-known hearing implant ever created, was first invented in the 1950s by André Djourno and Charles Eyriès,4 however it is NASA engineer Adam Kissiah who in the 1970s developed what would become the modern cochlear implant.5 Kissiah successfully applied for a patent6 in 1977 with the help of his NASA colleagues: 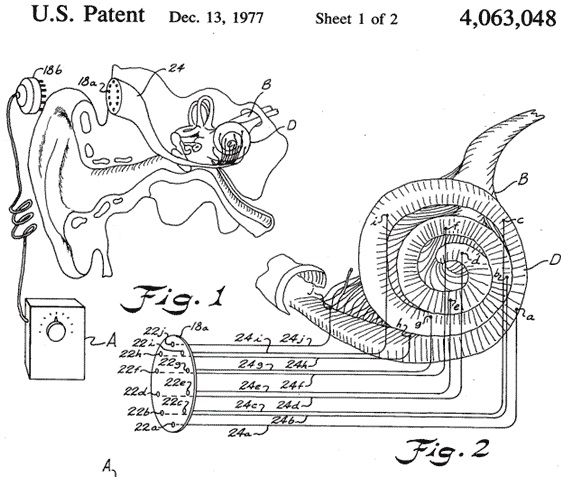 The patent describes how, once surgically implanted, the implant can bypass most of the wearer's auditory system. During operation, the implant's microphone receives an external audio signal and amplifies, filters, and digitizes it before transmitting the digitized signal to an array of electrodes (24a-j) embedded in the cochlea (D). The electrode array then stimulates the auditory nerve, which then sends signals to the hearing center of the brain, where they are interpreted as sound.

Other types of implants can bypass the cochlea entirely by stimulating the brain directly. CN105498090B7 describes an auditory brainstem stimulation implant (ABI) for people with severe hearing loss and problems with their auditory nerve, and for whom a cochlear implant would not be suitable. 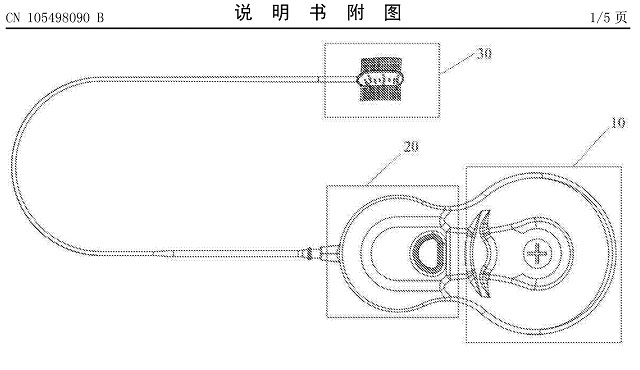 Implanting an ABI such as this one requires complex neurosurgery to the brainstem. During operation, the induction coil (10), implanted underneath the skin, receives a coded signal from an external transmitter. The stimulation control unit (20) then decodes and processes this signal before sending it to the implant's electrode array (30). The electrodes then stimulate the cochlear nucleus in the brain, which is then interpreted as sound in the auditory cortex.

Just in England alone, over a thousand people receive cochlear implants every year, and that number is projected to rise even further.8 Inventions such as the akouphone, cochlear implant and ABI have greatly improved the lives of many who suffer from hearing loss, leaving hope for even more transformative innovations in this space.

ARTICLE TAGS
UK Intellectual Property Patent
POPULAR ARTICLES ON: Intellectual Property from UK
What Is A Patent?
Keltie LLP
A patent is a time-limited monopoly awarded by countries as an incentive for investment in novel and non-obvious technical innovation. The purpose of the patent system is to allow companies...
More Drama For Combination SPCs
Potter Clarkson
The stage is set for another referral to the Court of Justice of the EU (CJEU) on the eligibility criteria for Supplementary Protection Certificates (SPCs) for "combination products"...
Gene Editing : CRISPR Breakthroughs Highlight IP Questions
Keltie LLP
There have been some exciting announcements about the application of CRISPR-Cas9 type gene-editing technology to treat serious illnesses in the past few weeks.
1. What Is An IP Driven Start-up?
Marks & Clerk
Few start-ups are established without the founders having an eye on a future exit, even if they hope to change the world along the way or as a final outcome of their efforts.
Patent Protection For Medical Devices – The Devil Is In The Details
HGF Ltd
It is well accepted that the development of new medical devices is very resource-intensive. It is, therefore, no surprise that companies apply for patent protection for new medical devices with the aim...
A Change To The Rule 71(3) Communication From The EPO
Marks & Clerk
A "prior national right" or "earlier national right" is a national patent or application which was filed before, but published after the effective filing date of an EP patent or application.
FREE News Alerts
Sign Up for our free News Alerts - All the latest articles on your chosen topics condensed into a free bi-weekly email.
Register For News Alerts
Article Tags
UK Intellectual Property Patent
Related Articles
Parallel Imports: Identicality Of Products When Repackaging Arnold & Porter
The MetaBirkin And The Very Modern Debate Unfolding In Hermès International, Et Al V. Mason Rothschild Marks & Clerk
UKIPO Requires UK Address For Service For International TMs And Designs Keltie LLP
Quantum Computing HLK
Fntastic's THE DAY BEFORE Trade Mark Application Blocked: The Advice Is To File Early! Potter Clarkson
Mondaq Webinars
Considering the Nigerian Start-Up Act & The Opportunities for Tech
Oake Legal
A Guide for Business and Investors – The Sleeping Giant; Why is Nigeria the New Emerging Market for Global Business
Threshing Fields Law Practice
More Webinars
Comparative Guides
Anti-Corruption & Bribery
Artificial Intelligence
Banking Regulation
Blockchain
Cartels
More Guides
Mondaq Advice Centres
UK
Coming to and Investing in the UK
Global
Trademarks in SAARC Countries
More MACs
Upcoming Events
Data Breaches: Dealing With The Long Tail
Lewis Silkin
Webinar London UK
ThinkHouse Spring Seminar 2023 - Birmingham
Gowling WLG
Seminar Birmingham UK
Mondaq Social Media