by Deloitte Financial Services Group
Deloitte
Your LinkedIn Connections
with the authors
To print this article, all you need is to be registered or login on Mondaq.com.

Contrary to previous years, the FCA has not published a separate Risk Outlook, but has instead included this as part of the Business Plan. This means that the discussion is relatively less detailed and descriptive. The FCA has identified seven forward-looking areas of focus, which it believes could pose risks to consumer protection, market integrity, and competition. Six areas of focus were "rolled over" from last year: technology; poor culture and controls; large back-books leading firms to act against existing customers' best interests; pensions, retirement income products and distribution methods (all of which are described as being of "significant interest"); and the risks from unaffordable debt; and unfair contract terms. The seventh is the importance of firms' systems and controls in preventing financial crime, which displaces concerns over house price growth from last year (although the FCA notes that it will continue to monitor the latter closely).

The FCA identified five key priorities for 2015-16: (1) taking a more markets-led approach to regulation; (2) protecting consumers, particularly regarding changes to pensions legislation and from consumer credit; (3) promoting individual accountability; (4) international issues, including international engagement, implementing EU policy, and financial crime; and (5) focusing on its people, including diversity and inclusion, and investing in staff.

Under the FCA's first priority and in line with its new strategy set out in December last year, the FCA will bring together cross-market thematic and market study work in 2015-16. The FCA plans to undertake fewer, more in-depth investigations, with 30 reviews and studies scheduled for 2015-16 (19 of which are carried over from the previous year), compared to 58 that were scheduled for 2014-15. Of the reviews and studies carried over from last year, the deadlines for completion in around half of them seem to have slipped back from what was originally planned, indicating that the FCA may have struggled to deliver against the ambitious targets it set itself for 2014-15.

New thematic reviews for 2015-16 will look at culture change programmes in retail and wholesale banks; inducements and conflicts of interest relating to retail investment advice; the role of Appointed Representatives; conflicts of interest inherent in the operation of dark pools; compliance of funds with their responsibilities to investors; retirement sales practices; the collection of unsecured debts; and staff remuneration and incentives in consumer credit firms. While most of these seem in keeping with concerns expressed in previous FCA papers or communications, the FCA's focus on dark pools is "news", and comes as the revision to the Markets in Financial Instruments Directive (MiFID II) is set to introduce rules to limit dark pools. Unsurprisingly, changing culture for the better features high on the FCA's agenda, not only for banks and consumer credit firms, but also more generally. While it might be unrealistic for the FCA to expect large-scale cultural change programmes to have been completed, it will be looking for evidence of continuous improvement. In that sense, the clock is ticking loudly – with the passage of time, the FCA's tolerance of failings which indicate poor culture will reduce from its already low level.

New market studies for 2015-16 will focus on non-advised sales of investment and protection products; how insurance firms use Big Data; retirement sales practices and outcomes; investment and corporate banking; charges paid by investors in asset management; and the mortgage market. There are some surprises here, as the FCA's recent publication on its review of competition in the wholesale sector, which announced the market study of investment and corporate banking, said that the FCA was only considering a market study on the asset management sector (see our blog for further details). Now the FCA seems to have made up its mind, although there is no indication of what has caused it to reach this conclusion so quickly. The studies on Big Data and the mortgage market also show the FCA exploring new territory with respect to competition.

Table A provides an overview of the FCA's planned thematic reviews and market studies for 2015-16.

There are some important questions that the FCA's Business Plan leaves unanswered. First, why does it say so little about how the FCA will use its concurrent competition powers with the Competition and Markets Authority (CMA)? Second, what does the new FCA structure hold? The organisation chart on page 82 indicates two supervision divisions - one for "Retail and Authorisations", the other for "Investment Wholesale & Specialists". Beyond this, there's no detail and overall the Business Plan is relatively light on references to firm-specific supervision. Third, is technology an opportunity or a threat? The answer seems to be "a bit of both". The section dealing with technological challenges shows the FCA weighing up the benefits that technology brings to consumers, including through enhanced competition, and the problems it can bring, including increased vulnerability of cyber attack and fraud. How the FCA strikes the balance between risk and return in terms of technological innovation is particularly important.

First referred to in its 2013-14 Business Plan, the FCA has set out some further detail on how its "outcome-based performance framework" can be used to measure how well it delivers on its statutory objectives. The FCA "will look forward to reporting against this framework" in its Annual Report, although notes that the outcomes are aspirational and the FCA expects it will take time to meet its outlined objectives. In 2015, the FCA will also launch an Efficiency and Effectiveness Review, which will look at the value for money of areas of higher expenditure and the FCA's governance and decision-making processes. In terms of the FCA's budget, the FCA's operating costs have increased by £27m (6%) from last year to £479m, due to investment in information systems and people.

What should firms be doing?

The seven areas of focus in the Risk Outlook set out the risks that firms should be mindful of over the coming years when developing their strategies and as part of their product governance processes. Boards and senior management should be questioning staff on the extent to which these risks apply to their activities, and how they are taken into account when trying to ensure that conduct risk management information is forward-looking. Firms should take note of the FCA's planned thematic reviews, and stand ready to assist the FCA in the information and data it needs to conduct the market studies.

Table A: overview of market study / thematic work that the FCA will undertake in 2015-16 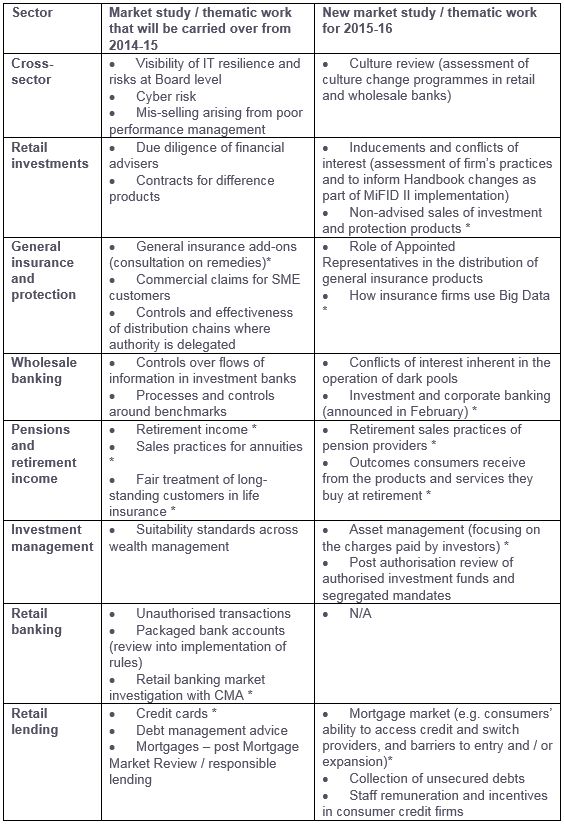