Brexit is the word which has been evoking a lot of emotions for a few years now because of its legal effects, in particular among the companies, for which the United Kingdom is an essential market. As it has been announced in the communication at the official website of the British government, October 31st 2019 is the remarkable date when the UK exits the European Union – the exit day. As the exit day is approaching, it is a good moment to take a look at the consequences that are looming on the horizon for the owners of the European Union Trademarks and the Community Designs. 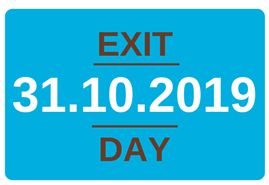 What is going to happen to the European Union Trademarks and the Community Designs?

Assuming that the date of the United Kingdom leaving the European Union is not delayed or once again re-scheduled, as from October 31st 2019 the situation of the European Union Trademarks and the Community Designs will be changed. Any terms for undertaking any potential actions will start to run as from the exit day.

The European Union Trademarks and the Community Designs registered till the exit day will automatically be granted the rights to the national applications in the territory of the United Kingdom. 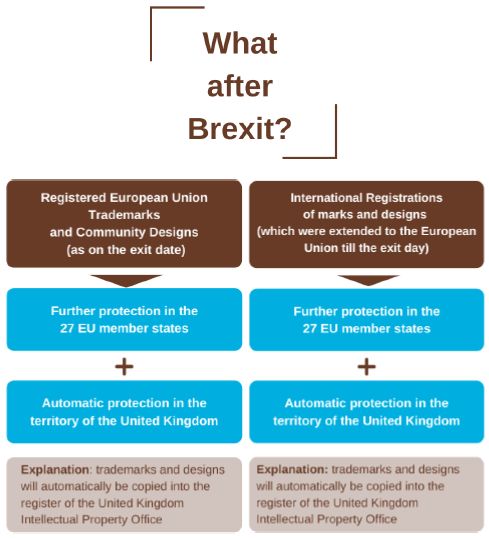 The priority dates, the dates of application and registration will be maintained.

Trademarks and designs will be given new national registration numbers in the UK, unless their owners are no longer interested in maintaining protection.

The protection of rights will continue to be in force till the renewal date in the EU, while further renewals will be governed by the national laws of the United Kingdom.

What about pending applications?

The European Union Trademarks and Community Designs, which are still in the phase of pending applications until the exit day, will not automatically be granted the rights to the national applications in the UK. In order to obtain protection in the UK, the applicants will have to file the relevant requests within 9 months of the exit date. 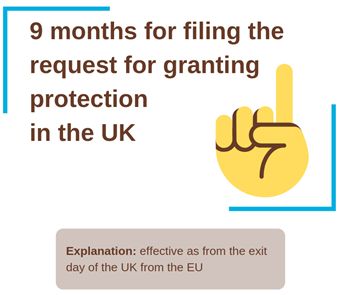 The filing of the relevant request will allow to maintain the European Union priority date of trademark and design applications, however further proceedings concerning their registration will be governed by the national procedure before the United Kingdom Intellectual Property Office, and registration will be subject to payment of additional fees and appointment of the local representative.

How renewals will be made?

The renewals of the registered European Union Trademarks and Community Designs, the protection of which will be recognized in the territory of the UK, will be governed by the United Kingdom Intellectual Property Office.

This means in practice that the owner of a right of protection, which was previously valid in the European Union, will have to go through additional renewal procedure in the UK and make the relevant payments to the account of the United Kingdom Intellectual property Office.

The communications issued so far indicate that the marks freshly copied into the register of the United Kingdom Intellectual Property Office will be under an obligation of being put to independent use in the territory of the UK only after passing the 5-year period from the exit day.

In other words, if a trademark of the European Union is registered and already falls under an obligation to be put to genuine use in the EU, and the holder of the mark is using it in the part of the countries of the EU, for example – in Poland, Germany and Spain, such use will be recognized by the United Kingdom Intellectual Property Office as the use in the territory of the UK for the period of the first 5 years from the exit date.

The agreements signed by trademark and design holders

As there is no administrative body of the European Union dealing with granting patents for inventions and utility models, patents will not be affected by Brexit.

What precautions should be taken?

Considering the fact that Brexit will have serious impact upon further continuation of rights to the European Union Trademarks and Community Designs in the UK, it is advisable for the companies which are the owners of such rights (especially those for which the EU market is of particular importance) to make an audit of their intellectual property portfolio in cooperation with a professional trademark and design attorney, in order to make a plan of how to proceed on the basis of the above described actions, which should be taken to ensure the continuation of one's rights after Brexit.

ARTICLE TAGS
Poland Intellectual Property Trademark
POPULAR ARTICLES ON: Intellectual Property from European Union
Key IP Trends To Watch For In 2020
Dennemeyer Group
A new decade is upon us, and its first two months have veered between ordinary and chaotic. Somewhere in the middle of that spectrum lie a handful of developments relevant to the field of Intellectual Property.
How Quickly Can A European Patent Be Granted?
Adamson Jones IP Ltd
If you are looking to obtain a European patent, there are a number of factors that affect the time it takes to be granted.
What Does The Expiry Of The Brexit Transition Period Mean For Your IP Rights?
Adamson Jones IP Ltd
The UK left the European Union on 31 January 2020, although many of the effects of this have been suspended during the Brexit transition period of the withdrawal agreement, which is set to expire on 31 December 2020.
How To Prove 'Passing Off'
Gowling WLG
'Passing off' does not have a statutory basis and doesn't need to be registered to be effective.
"Perfect Strangers" - Deep Purple Judgment Of The European General Court
Ankara Patent Bureau
In the previous days, during a routine trademark monitoring session, we caught sight of a DEEP PURPLE trademark application (2020/83814) published recently in Turkey.
How To Get Your Patent Application Claims Ready For Europe?
Adamson Jones IP Ltd
One of the biggest issues faced by PCT patent applications entering Europe is the structure of the patent application claims.
FREE News Alerts
Sign Up for our free News Alerts - All the latest articles on your chosen topics condensed into a free bi-weekly email.
Register For News Alerts
Article Tags
Poland Intellectual Property Trademark
Related Articles
EPO Allows A New Form Of Evidence JWP Patent & Trademark Attorneys
Oktoberfest Trademark Protected But Not For Festivals JWP Patent & Trademark Attorneys
Effective Proceeding Before EPO – News And Tips From Practitioners – 27 October 2020 JWP Patent & Trademark Attorneys
Trademarks Comparative Guide Patpol Kancelaria Patentowa Sp. z o.o.
Do You Want To Register A Trademark With The Word COVID? Think Twice JWP Patent & Trademark Attorneys
Mondaq Webinars
International Arbitration and Cyprus
Patrikios Pavlou & Associates
Webinar Limassol Cyprus
International Transfer Pricing Trends from a Swiss Perspective - Practical Tips and Lessons Learned
Tax Partner AG
Webinar Zurich Switzerland
More Webinars
Comparative Guides
International Arbitration
Labour and Employment
Trademarks
Virtual Currencies
Mondaq Advice Centres
Global
Trademarks in SAARC Countries
Global
Investment Immigration
More MACs
Upcoming Events
Mondaq Social Media