In relation to the 50th anniversary of Inventa International, we have been given the challenge to analyze certain intellectual property data over the past 50 years on the African continent.

As it is impossible to cover a panoramic view of the various events, we chose just a few topics we found interesting for this minor-scale study. At the outset, it seems important for us to outline a short introduction about the African continent and the protection of industrial property in the countries of which it is made up.

Since the start of the new millennium, Africa's economic growth has accelerated its pace and the GDP has been rising by around 5% per year, with salaries per capita has risen by 2.1% a year. The infrastructure in the countries is more developed and resources such as water, electricity and internet are increasingly accessible to a large part of the population, even in predominantly rural areas, which contributes to the prosperity and development of the economy.

The poverty rate has been falling, for the reasons set out above. Since the year 2005, about eight million people have ceased to be in poverty and the ratio of people living in extreme poverty (under US$1.25/day), especially in Burkina Faso, Ghana, Malawi, Mali, Mozambique, Rwanda, Senegal and Uganda has fallen by about 50%.

"Yet Africa is still a very rich continent in terms of natural resources, though its countries continue to be highly dependent on imports, a factor that turns out to be very attractive for investors and companies."

Without any doubt, human capital is the key to the good conduct of the growth of the African continent at all levels. Over the last twenty years, the population of Africa has increased by about 2.5% per year and, in 2011, the number of people living on the continent has surpassed the one billion mark. It is estimated that by 2050 some African countries will have doubled and tripled their population, making Africa the region with the highest population growth today.

In 2020, in view of the global pandemic that has ravaged the world, Africa, like all other continents, has slowed and seen a slight downturn in its economic growth.

Yet Africa is still a very rich continent in terms of natural resources, though its countries continue to be highly dependent on imports, a factor that turns out to be very attractive for investors and companies.

In this context, we know that registering and protecting industrial property is fundamental for operations in each and every country on the African continent. Many countries here are still developing and despite all progress, remain particularly problematic with regard to infringement of intellectual property rights and counterfeiting thereof. In addition to the registration at National Offices, it is also extremely advisable to proceed to register the rights at Customs Houses, whenever possible and in countries where this service is available.

Registering industrial property rights in Africa can be a lengthy process and at times complicated so it is important for companies to seek good advice in this area. Some local professionals are unreliable and can leave cases pending and clients unanswered, and it is extremely important to look for trusted firms.

The registration process for trademarks, patents and industrial designs may vary, but on average the minimum and maximum time varies between nine months and a year and a half. Most countries do not require a power-of-attorney and legalized or notarized documents, which greatly facilitates the streamlining of registration processes, but other countries such as Angola, Rwanda, Cape Verde, Egypt, Ethiopia, Liberia, Libya, Madagascar, Mauritius, Mozambique, Sao Tome and Principe, Seychelles, South Sudan and Sudan still require the notarization and legalization of documents for registration of IP rights.

Having set out this short introduction on the African continent and the protection of intellectual property rights in the countries of the continent, we will now make a brief analysis of the evolution of industrial property laws in the last 50 years.

The current Industrial Property laws on the African Continent

In drawing up this study, data were compiled on the latest Intellectual Property Laws in the various countries that make up the African continent. If we go back in time, precisely 50 years, to the year 1971 we notice that many countries had just become independent or some countries were in the process of becoming independent. It is therefore natural to find IP laws enacted after the independence of some countries that have crystallized in time. In various countries, such as Angola, independence did not bring immediate peace to the country and the pacification processes lasted several years. It is therefore normal to see that the countries with the highest political stability appear in the list below with the most recent IP laws. Perhaps, because there needs to be social and political peace in order to design and update IP protection systems.

Below is a listing of the year of introduction of the national laws on the protection of trademarks, patents and designs, followed by the year they joined the World Intellectual Property Organization and, lastly, the year they signed up to the Madrid Protocol for all the countries on African soil. 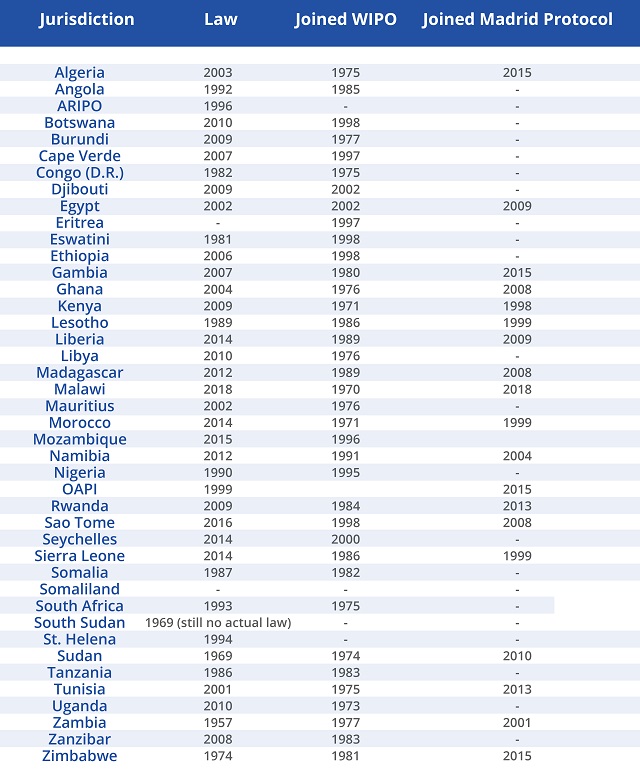 In the first place, we can see those various countries whose national laws accompanied human and technological evolution and chose to harmonize them in accordance with existing international and regional treaties. It can therefore be said that the countries most developed today in the African socio-economic context are those that opted to update their intellectual property laws. It is therefore not strange to see countries in North Africa, such as Algeria, Egypt, Tunisia, Libya, Liberia and Morocco, with laws more current than other countries on the African continent. On the other hand, we also see countries such as Liberia, Libya, Madagascar, Malawi, Mozambique, Namibia, Rwanda, Sao Tome and Principe, Seychelles and Sierra Leone with relatively up-to-date for the international scene, which is, of course, to be praised. On the other side of the coin, we find countries that curiously are great economic powers on the Continent, but which have extremely backward laws, and this has had repercussions on the absence of effective legal mechanisms for combatting infringements of intellectual property rights. Examples of such countries are Angola, the Congo and Nigeria.

Secondly, it seems important to praise the efforts made by some African countries in creating and signing up to regional agreements relative to intellectual property protection. Thus we have the African Intellectual Property Organization (Organisation Africaine de la Propriété Intellectuelle), created through the Bangui Agreement, signed in 1977, in the capital of the Central African Republic, from where it gets its name. This organization, which currently has 17 member states, all mostly French-speaking, provides a centralized registry at the organization which automatically extends to all member states, namely Benin, Burkina Faso, Cameroon, the Central African Republic, Chad, the Congo, Ivory Coast, Equatorial Guinea, Gabon, Guinea, Guinea-Bissau, Mali, Mauritania, Niger, Senegal, Togo and the Comoro Islands. Moreover, it is possible to find ARIPO (The African Regional Intellectual Property Organization), created through the Lusaka Agreement, signed in the year 1976, which enabled the creation of a regional African organization for the protection of intellectual property, providing a centralized body for registering IP rights, not unlike the International Registry of Madrid, that is, through the designation of states.

Thirdly, a final remark on African countries joining the Madrid system. As known, the Madrid system refers to an international trademark registry mechanism, administered by the World Intellectual Property Organization (WIPO). This system provides for the centralization of applications before WIPO, followed by a process of grant and registration by each one of the designated countries. In this regard, just as in most countries of the world, it is also possible to find several African countries that are part of the Madrid system (either the Agreement or the Madrid Protocol). It can be seen a large proportion of African countries that are part of the Madrid system are those which curiously have opted to update their laws protecting intellectual property over the years. In contrast, it is possible to find countries that occupy top places as veritable African economic powers which do not update their intellectual property laws, or sign up to major international agreements, as is the case of the Madrid system. Unfortunately, as mentioned previously, an outdated system for protecting intellectual property only allows the system to find flaws and is vulnerable to infringement by offenders who find the loopholes needed in the system to profit from it.